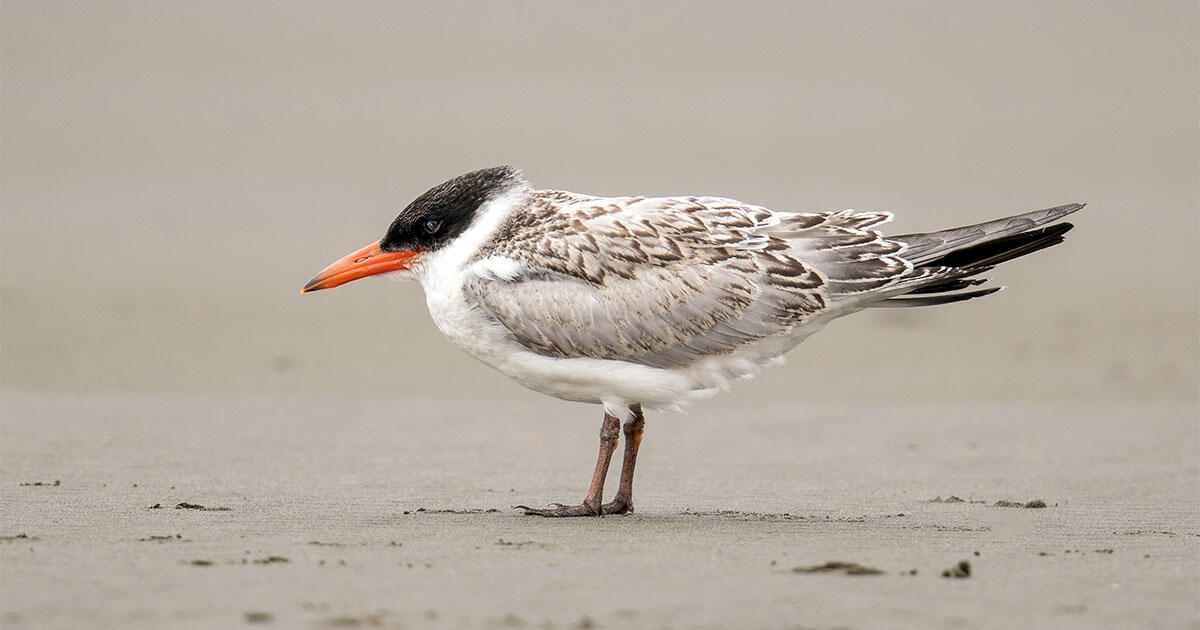 Every April, like clockwork, hundreds of Caspian Terns descend upon an abandoned concrete factory in West Seattle and nest on its flat, sandy roof. Ordinarily the birds raise their chicks on this faux beach in relative peace. But not this year. On June 28, as temperatures broke records across the Pacific Northwest, scores of tern chicks leapt from the roof in a desperate search for relief from the heat.

“A lot of them ended up on the ground with broken bones, and their feet were burning from the concrete,” says Kersti Muul, a conservation scientist with Seattle Audubon. The temperature that day was 108 degrees Fahrenheit; closer to the pavement, it may have spiked to 145 degrees.

“It was a grisly scene,” Muul recalls. “There were bodies everywhere.”

In the end, 52 tern chicks were taken to PAWS Wildlife Center in Lynwood, Washington, for rehabilitation. About half did not survive, but thanks to the efforts of PAWS and other on-site rescuers, 25 young terns were successfully reintroduced to the colony.

Extreme heatwaves across the Pacific Northwest and southwestern Canada disrupted countless nesting birds this year. In addition to the terns, baby swallows, sparrows, and raptors also flooded into PAWS and other wildlife rehab facilities after jumping from their nests. “The center was very, very busy during that heatwave,” says PAWS wildlife naturalist Jeff Brown. PAWS received 45 songbirds and 31 raptors, including 11 Cooper’s Hawks and eight Bald Eagles.

Kelley Ward, the director of Featherhaven, a songbird rehabilitation center in Enumclaw, Washington, took in 47 shell-shocked young Violet-green Swallows in just two days. “The swallows were terribly dehydrated,” she says. “That was huge, to get that many birds that quickly.”

The treated birds are likely a small fraction of those affected by the extreme heat. “The Caspian Tern is a very visceral, tangible example,” says Trina Bayard, director of bird conservation at Audubon Washington. “But we have to imagine that a lot of birds suffered during this heat wave that aren’t quite as visible.”

Ecologists expect to see chick mortality events like these with increasing frequency—especially among species adapted for life in cool conditions—as a result of climate change coupled with growing habitat loss. Extreme heat events, currently estimated to occur once a millennium, might occur every 5 to 10 years under a 2-degree-Celsius warming scenario, according to an analysis by World Weather Attribution, an international scientific collaboration that has developed methods to connect extreme weather with climate change. The heat would have been “virtually impossible without human-caused climate change,” the report concluded.

Birds aren’t the only ones in danger. Over the course of three days, 13 people lost their lives to hyperthermia in Seattle alone, and more than 1,500 were hospitalized with heat-related ailments across the state of Washington, according to the Seattle Times. A New York Times analysis suggests hundreds more people across Oregon and Washington likely died. The region is currently experiencing its second intense heatwave of the summer. Lucky for the birds, this one is occurring after nesting season, when their young would be most exposed to heat stress.

Birds don’t sweat, but they have other ways of cooling off in hot weather. The most common method is by panting. Unfortunately, panting is an active process that requires a lot of muscle movement. “So it’s almost paradoxical,” says Andrew McKechnie, an avian physiologist at the FitzPatrick Institute of African Ornithology in Cape Town, South Africa. “To offload heat by panting, birds basically have no choice but to produce heat.” Birds that have insulating feathers to keep moisture out, including water-friendly birds like Caspian Terns, are especially prone to hyperthermia when panting in extreme conditions, since their waterproof feathers also trap heat in.

Nestlings are even more vulnerable to heat than adult birds. Their tiny bodies, still in development, struggle to regulate temperature—one reason why parents sit on their young is to help them buffer hot and cold. Not only are chicks less efficient at relieving heat stress, they also have limited mobility, says Blair Wolf, a biologist at the University of New Mexico. This makes birds which nest in the open, like terns, especially helpless. “Unless the adults are shading them, they’re going to be exposed to direct sunlight,” he says.

Taken together, these vulnerabilities put baby birds in peril during a heat wave, especially one that strikes while they’re still in the nest, such as the Pacific Northwest’s June event. They don’t yet have the capacity to cool themselves off, and if their parents are overheating, too, they can’t rely on help from adults. Nestlings have few options: stay and roast in place, or jump and hope for the best.

If the Caspian Tern chicks were nesting in their natural beachfront habitat, their leap of faith might have gotten them somewhere—specifically into cooling ocean waters or shade at the edge of the colony. But habitat loss along coastlines has forced them into less-than-ideal habitat. To Seattle’s terns, a flat, sandy rooftop appears an awful lot like an empty beach. “It looks like great nesting habitat,” says Nat Seavy, director of migration science for the National Audubon Society. But the roof has no ocean view, only a sharp ledge. When the tern chicks looked for relief from the heat, they plummeted over the side.

Ward suspects that the Violet-green Swallows brought in for rehabilitation at Featherhaven faced a similar predicament. Swallows ordinarily nest in tree nooks. But when trees aren’t available, they settle for small openings underneath roofs, where heat collects quickly. “They’re running out of places to nest,” she says. “They were just bailing. I can’t even imagine how hot it got up under those roofs.”

Both terns and swallows return to the same nesting site every year—they prefer to raise their families in familiar settings. But if these early season heatwaves continue, their accustomed sites might not be feasible much longer. “These little guys are climate refugees,” Muul says. “They had to abandon their home, literally, because it was too hot.”

This year’s extreme heat probably did not have an effect on the birds at a population level; they’ve evolved to miss a breeding season here and there. However, a regular onslaught of heatwaves during successive nesting seasons, on top of habitat and climatic changes around nesting grounds, could result in shrinking local populations, Wolf says. “That chronic heat stress is going to lead to nest failures.” Over time, if many populations are affected, the species can go into decline. This pattern, likely to grow as climate change advances, led Audubon scientists to conclude that 389 North American bird species are at risk of future extinction if governments and industries fail to reduce global carbon emissions.

To protect the future of vulnerable birds and humans alike, experts say climate action is necessary. Wolf hopes this event will serve as a wakeup call. “When young birds start jumping out of the nest,” he says, “that’s pretty radical.”