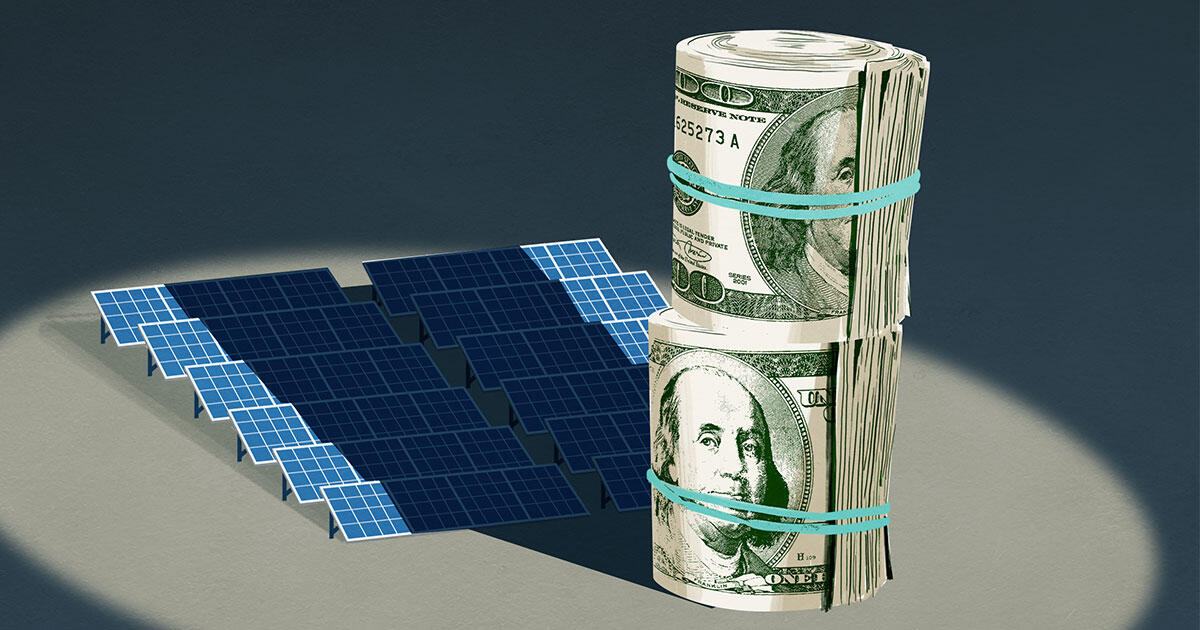 With renewable energy on the rise, many electric utilities—especially those dependent on fossil fuels—are facing a crisis. Some are embracing the challenges necessary to implement new infrastructure, but others are resisting change in extreme ways. A new stories series from Audubon investigates the industry at this crucial time.

Early in the morning on Tuesday, July 21, 2020, federal officers raided a farm in rural Glenford, Ohio. The FBI agents searched the home and arrested 61-year-old Larry Householder, the speaker of the Ohio House of Representatives. They charged him with racketeering: orchestrating a $60 million bribery scheme involving the electric utility FirstEnergy Solutions, which funneled money to Householder and several co-conspirators through a nonprofit group called Generation Now, a U.S. attorney alleged. The defendants, who include three lobbyists and Householder’s longtime political strategist, pleaded not guilty in federal court by September. Since then, two have pleaded guilty.

The provisions in HB6 gave FirstEnergy a significant financial boost, beyond preserving its failing plants. Mere days after its passage, the utility announced its super-polluting Sammis plant on the Ohio–West Virginia border would remain open. The coal-fired facility was scheduled to close in June 2022.

The corruption in Ohio is the latest example of how some private electric utilities are willing to stretch the limits of the law to influence politicians, shore up fossil-fuel investments, and maintain their grip on power.

In Illinois, the electric utility Commonwealth Edison admitted in 2020 to bribing elected officials in exchange for electricity rate increases. ComEd received $150 million in benefits; now the company will pay a $200 million fine, and an investigation is ongoing.

In Michigan, the state’s largest utility, Consumers Energy, gave more than $43 million to a dark money PAC, Citizens for Energizing Michigan’s Economy, to influence political races between 2014 and 2017. In 2019, the utility settled with the Michigan Public Service Commission and agreed to stop donating to political advocacy groups for two years.

In Arizona, in 2014, the state’s largest utility directed millions through dark money groups to candidates running for the Corporation Commission, the regulatory body that sets utility rates, to minimize incentives for homeowners to install rooftop solar panels.

Across the country, the story repeats itself. Utilities use dark money, front groups, LLCs, and national interest groups to covertly advance their agendas to maintain the status quo and twist laws in their favor, pressing legislators to keep coal and gas powering our electrical grid at the expense of renewable energy.

Utilities’ behavior is in line with U.S. corporate behavior. Since 2010, when the Supreme Court decided the Citizens United case, corporations have used dark-money groups to mask political donations from the public to the tune of $1 billion. But some experts question whether electric utilities belong in a different category. Should utility companies, which provide a public service, have a captured rate base, and often hold regional monopolies, be allowed to influence elections?

“They get to use the money that you pay them for their political ends,” says Leah Stokes, a political scientist at UC Santa Barbara and the author of Short Circuiting Policy. “So I think we should be saying utilities cannot spend money on politics in this way.”

When they do, the policies can come at their customers’ expense. Many ratepayers have no say in their electricity source or where it’s generated, Stokes says. “If your electricity provider is anti-climate, you don’t get to do anything about that,” she says—except vote. “People can have a say, however, in the source of their electricity when they elect governments who pass clean energy policies.”

Rates paid by customers are used to prop up declining power plants, as in Ohio, or to transition coal-fired power plants to fossil gas, as proposed in South Carolina. If a customer disagrees, they can’t typically switch to another utility; in most cases they have no choice but to continue with their local provider. “Customers in many parts of the country pay more for electricity than they need to because of bad investments by their utilities in coal-generating plants that are uneconomical,” Stokes says.

The heaviest price of this utility behavior, however, comes in future climate change. By 2050, global carbon emissions need to be brought to zero, experts say, to keep rising temperatures from creating a cascade of catastrophic results. Electricity production accounts for more than a quarter of U.S. greenhouse gas emissions, according to the U.S. EPA, and nearly two-thirds of our electricity comes from burning fossil fuels, mostly coal and natural gas. That makes transitioning our electricity from fossil to renewable energy a pivotal part of the climate solution.

“If we take 2050 as our deadline for cleaning up the electricity system, we are way behind where we need to be,” Stokes says. “Electricity is the golden ticket to the clean energy transition.” Until the grid produces carbon-free power, any electric devices including cars will continue to run on fossil fuels.

The benefits of accelerating that shift could be tremendous. If utilities invested in renewables, instead of doubling down on fossil fuels, electricity prices would drop in the long term. A recent report by UC Berkeley showed that with deep investments in renewables, the United States could close fossil-fuel plants and reach 90 percent clean electricity by 2035 at no extra cost to consumers thanks to the falling cost of wind, solar, and battery power.

But to get there, utilities need to get out of the way and to stop resisting change.

How did we get here: a place where utilities—which are, in theory, agnostic to their energy sources—bribe politicians to delay or halt the rollout of renewable energy?

The sordid tale goes back to the early history of the U.S. electrical grid. In the early 20th century, states struck deals with private companies that generated and delivered electricity. In exchange for allowing private electric utilities to operate as monopolies, securing regional power, the government regulates the price of electricity while ensuring a return for shareholders. This arrangement lets utilities stay profitable (they get an average return on equity of more than 10 percent) while selling electricity to the public at an affordable price.

But for a number of utility executives, staying profitable is not enough: They want to earn larger profits for themselves and their shareholders. So, some privately owned utilities financed or built larger coal plants to generate electricity, which they then distributed and sold to the public.

Utilities owning their own power plants seemed like a good business move—until cheaper, cleaner renewable fuels came along. Now many of those older utility-owned power plants are losing money; they can’t compete with cheaper fuels. FirstEnergy’s Sammis plant, for example, built coal and oil-fired units between 1959 and 1972. Now it’s failing financially due to cheaper natural gas and renewable energy. To keep it running, the utility needed a financial injection—and they found one in funds from HB6.

In Ohio, specifically, there was “a reluctance to let go of the power plants they’ve already built that are still operating, even when those power plants are losing money without state subsidies,” says Dave Anderson, a policy and communications manager with the Energy and Policy Institute, an electric utility watchdog.

Utilities are bound to fossil fuels not only through old financial investments. It’s also their century-old operational mindset, and consumers’ expectation that we can use as much energy as we like whenever we’d like it. The system relies on fuel-on-demand—specifically that a coal, oil, or gas plant can simply burn more fuel to generate more electricity when customers use more than expected. Wind farms or solar arrays don’t provide the same steady stream of electricity (not until more advanced battery storage tech is invented, anyway). As a result, switching to renewables requires a switch in utilities’ entire approach to generating electricity.

Switching to renewables requires a switch in utilities’ entire approach to generating electricity.
_________

Some utilities are proving resistant to that change. “It’s a lot easier for them to continue to use the logic of a fossil fuel power plant,” says cultural anthropologist Gretchen Bakke, author of The Grid: The Fraying Wires Between Americans and Our Energy Future. “It’s really complicated to run a [utility using] variable and distributed input.”

To move them along toward wind and solar sources, state legislatures are passing energy standards. Twenty-nine states and the District of Columbia now have renewable or clean energy standards (including 100 percent clean energy-transition laws), which require utilities to supply a certain percentage of electricity from renewable sources. But a number of utilities remain recalcitrant. Some states, like Ohio, have reversed their clean energy policies following pressure from utilities.

Now, after Householder’s arrest, Ohio may see a reversal of the reversal. (Householder was re-elected to the state legislature in November and sworn in to a new term in January. It’s unclear whether the legislature will let him serve, and thus far he has not bowed to the new House Speaker’s calls for him to resign.) State officials are discussing repealing or replacing HB6. Repealing the law—a move supported by 43 percent of Ohioan respondents in a poll from September—would reinstate the state’s renewable energy standard to 12.5 percent by 2026. Some want to go further: A new law could allocate more money toward wind and solar to give clean electricity a boost.

Unlike fossil fuel-burning power plants, once solar panels and wind farms are in place, the cost of running them is virtually zero, Bakke says. But, she cautions, utilities will have to adapt to these new electricity sources in ways that require significant investment to make a renewably powered grid stable. Utilities, she says, are combatting a death spiral. “They’re fighting to stay alive as companies, as services, as a necessary part of our world.”

That some are resorting to outright bribery shows what a tough spot they’re in.

“I think they just assume that this power trip they’re on can’t possibly be interrupted. FirstEnergy, at least, is learning the hard way that that’s not the case,” Anderson says. “It seems like utilities change when the public and the policy makers demand it, and not before.”