What Just Happened in Glasgow at the U.N. Climate Summit? 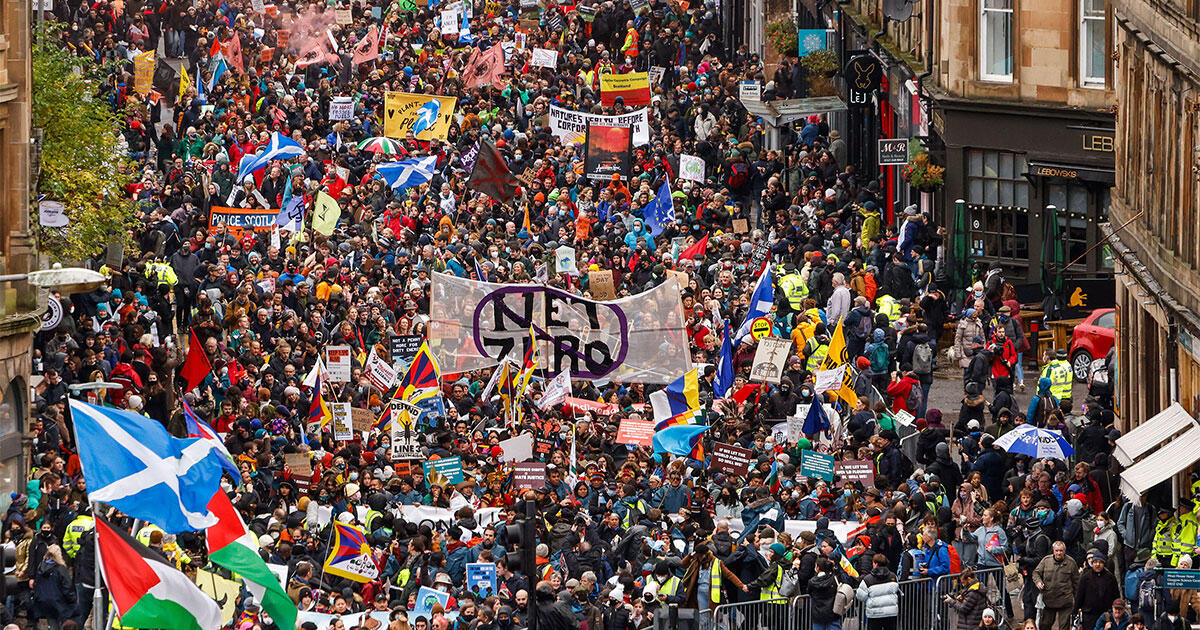 The major outcome of most significant climate policy summit in six years is this: The most-polluting countries aren’t willing to reduce carbon emissions fast enough to prevent global warming of 1.5 degrees Celsius above pre-industrial levels. Humanity is nearly certain to heat the atmosphere more than this long-held aspirational temperature target, which scientists hoped could prevent catastrophe around the world.

For the past few weeks, government officials and diplomats from 197 nations—and delegates representing companies, organizations, and other interests—met in Glasgow, Scotland, to negotiate the future of the planet. Six years ago the 21st Conference of the Parties, or COP21, resulted in the Paris Agreement: an international treaty that committed nations to submit and update pledges to reduce carbon emissions every five years. This month at COP26 nations submitted new climate targets for the first time since Paris. (The conference was delayed a year due to the COVID-19 pandemic.) In the interim, leaders were expected to pass governmental policies at home to support their pledges.

Expectations for the meeting were high. The United Nations billed COP26 as “the world’s best last chance to get runaway climate change under control.” A week before the conference, the U.N. published its Emissions Gap Report, which found that the new pledges put the world on track for global temperature rise of 2.7 degrees Celsius by the end of the century. This level of warming would put two-thirds of North American bird species at risk of extinction, according to a 2019 Audubon report.

As delegates arrived, one question hung in the air: Would world leaders take sufficient actions to change the planet’s current course? By the end of COP26, the answer was a firm “no.” The Glasgow Climate Pact, agreed to by all parties, made some progress, such as for the first time acknowledging fossil fuels—and singling out coal—as drivers of global warming. But the pledges and new actions were not enough to prevent warming of 1.5 degrees. Neither did the wealthiest, most polluting countries send billions of dollars they’d pledged to nations experiencing the worst impacts; nor did they create a requested fund to raise additional billions to help the most vulnerable people.

An independent analysis by the Climate Action Tracker called the climate commitments “lip service,” since even with the new and improved pledges from Glasgow “we will emit roughly twice as much in 2030 as required for 1.5 degrees.” The global target of holding warming to 1.5 degrees Celsius above pre-industrial levels has long been the scientific and political standard for preventing climate catastrophe. In 2018 the United Nations underscored its importance in the landmark Special Report on Global Warming of 1.5°C, which says the world has until 2030 to halve carbon emissions to prevent the total loss of coral reefs and summer Arctic sea ice, inundation of some island nations by sea level rise, and significantly more destructive extreme weather. To date the planet is close to 1.2 degrees Celsius above pre-industrial levels; we’re on track to reach 1.5 degrees warming in the early 2030s.

Many wealthy countries responsible for the vast majority of carbon that’s accumulated in the atmosphere showed up in Glasgow having failed to pass emissions-reduction policies to support the promises they’d already made. Still, many increased their ambitions, including President Joe Biden, who pledged to reduce the United States’ net greenhouse-gas emissions by 50 to 52 percent below 2005 levels by 2030.

The key to achieving those significant reductions is Biden’s Build Back Better plan, legislation currently moving through Congress which includes $320 billion in tax credits to make clean energy and electric vehicles cheaper. According to an analysis by the Rhodium Group, the combination of that bill plus additional actions to cut emissions from the White House, state and city leaders, and corporations could put the country close to meeting Biden’s COP26 pledge. The Build Back Better plan was passed by the House this morning; now it moves to the Senate for further negotiation and a vote. It comes on the heels of the infrastructure bill, which Biden signed into law this week. That bill does not cut carbon emissions directly but provides many billions of dollars to build out clean energy infrastructure and electric vehicle charging stations, cap orphaned oil and gas wells, and prepare communities for extreme droughts, heatwaves, floods, and wildfire.

World leaders also made new commitments at COP26. The United States signed onto pledges to curb methane emissions as well as end deforestation by 2030. Now Biden will have to pass policies at home to cement these promises made on the international stage.

Throughout the conference, leaders were confronted by young activists. They lined hallways, chanted at delegates, and staged ‘die-ins’ to remind leaders of climate change’s present death toll. An estimated 100,000 protesters marched through rainy Glasgow streets on November 6, demanding world leaders stand up to fossil fuel industries.

The biggest polluters, despite pleas, were unwilling to limit atmospheric warming to 1.5 degrees.

The biggest polluters, despite pleas, were unwilling to make the concessions required to limit atmospheric warming to 1.5 degrees. Leaders of countries that have contributed little to global warming also begged for help fortifying their countries from increasingly extreme weather. Barbados Prime Minister Mia Mottley called the current trajectory “a death sentence.” In a formal address, she said: “We’ve come here today to say, try harder.”

From the start, vulnerable nations’ top priority was the creation of a new “loss and damage” fund, calling for at least $500 billion by 2024 to help their people survive impacts already locked in by global warming. Negotiators failed to create the fund. However, they found room for other financial work: They created rules for carbon markets and offsets, which could funnel trillions of dollars into climate actions. Yet many activists are skeptical of these tools, which are ultimately controlled by wealthy corporations and investors, and subject to market manipulation.

On a high-drama final day, November 14, leaders from three of the world’s most powerful and polluting countries—United States, China, and India—huddled to make a last-minute change to the agreement, bypassing the normal negotiation process. Forcing other nations to sign-off or else reopen the conference’s work to debate, they weakened the final language of the Glasgow Climate Pact: Instead of calling for the “phase-out of unabated coal power and phase-out of inefficient fossil fuel subsidies” it now calls for a “phasedown of unabated coal and phase-out of inefficient fossil fuel subsidies” (emphasis added). Alok Sharma, president of COP26, held back tears as he apologized to delegates for how the negotiations ended, emphasizing the need to finalize the agreement in the late hours.

Despite the tweak, this was the first time any U.N. climate pact acknowledged coal and fossil fuels as the cause of climate change. “They changed a word but they can’t change the signal, that the era of coal is ending,” said Greenpeace executive director Jennifer Morgan. “If you’re a coal company executive this COP saw a bad outcome.”

One piece of good news is that attendees agreed to not wait another five years to strengthen their pledges. Instead the 197 nations are expected to submit new climate goals to the United Nations by the end of 2022.

What does it mean for birds?

Given the results of COP26, preventing global warming of 1.5 degrees Celsius is now seemingly off the table. In that world, which we’ll experience within decades, Arctic birds face the highest risk of extinction, according to the 2019 Audubon report Survival by Degrees. These birds, including rosy-finches, redpolls, Arctic Warblers, ptarmigans, and Snow Buntings, nest in high-latitude habitats, which are warming faster than anywhere else on Earth.

Also at risk are birds that nest in the boreal forest, including many of the stunning, colorful warblers seen during spring migration—Connecticut, Cape May, Bay-breasted, Blackburnian, Magnolia, and others. Their boreal forest habitat is changing fast: Wildfires are growing more common, and as they burn, evergreen forests are being replaced by deciduous woodlands and grasslands. It’s possible other birds could adapt to the habitat changes, but scientists suspect that these boreal-nesters are limited to the northern region.

Birds that live in hot places are at risk from climate change, too. Already, the hottest desert regions in the West are experiencing new extremes. In the Mojave Desert, bird communities have collapsed over the past century due to heat and limited water access. Other hot, arid places are likely to experience similar declines because they’re based on birds’ basic physiological constraints. To stay cool, birds need water, which they acquire primarily through their food. As it gets hotter, it is harder for them to hunt; at some point, their bodies give out.

This is just a sampling of some of the challenges portended for birds by the outcomes of COP26. Much is unpredictable. Audubon’s climate modeling for species does not include the impacts of extreme weather—for example the Pacific Northwest heat wave that drove baby birds to jump from their nests this summer or wildfire smoke that interferes with migration and damages avian airways. The models also can’t account for birds’ ability to adapt to new environments; some birds may surprise us by figuring out new ways to survive.

If birds get pushed out of the last places they have, there isn’t much space left for them to go.

But, overall, the models are conservative, meaning the disruption to birds could be more severe than predicted. During past climatic changes, birds could fly into new landscapes. If one part of the desert grew too hot, they could shift into a cooler area nearby. If a prairie burned, there was plenty of other prairie—millions of acres of the Great Plains, for example. Now much of that habitat is gone, converted to roads, farms, cities, and neighborhoods. If birds get pushed out of the last places they have, there isn’t much space left for them to go.

Still, any new climate actions would help. Limiting global warming to 1.5 degrees, and not letting it reach 2.7 degrees as currently projected, could help 150 species avoid conditions that risk their possible extinction. In this way, bird and human fates are tied. Shifting weather patterns are disrupting predictable routines. Homes are changing and may disappear entirely, replaced by something new. Extreme weather causes disaster and mass death for entire species and entire nations. They have nowhere to flee, unless they receive help—loss and damage funds for vulnerable nations or conservation actions for vulnerable birds.

The results of COP26 remind us that 1.5 degrees of warming will be here soon. Catastrophic climate change isn’t a far-off future possibility: It’s here, and it is going to get harder. International meetings and treaties can help, but they won’t save us. All of us, especially the most privileged and complicit, must roll up our sleeves to help those who need it.