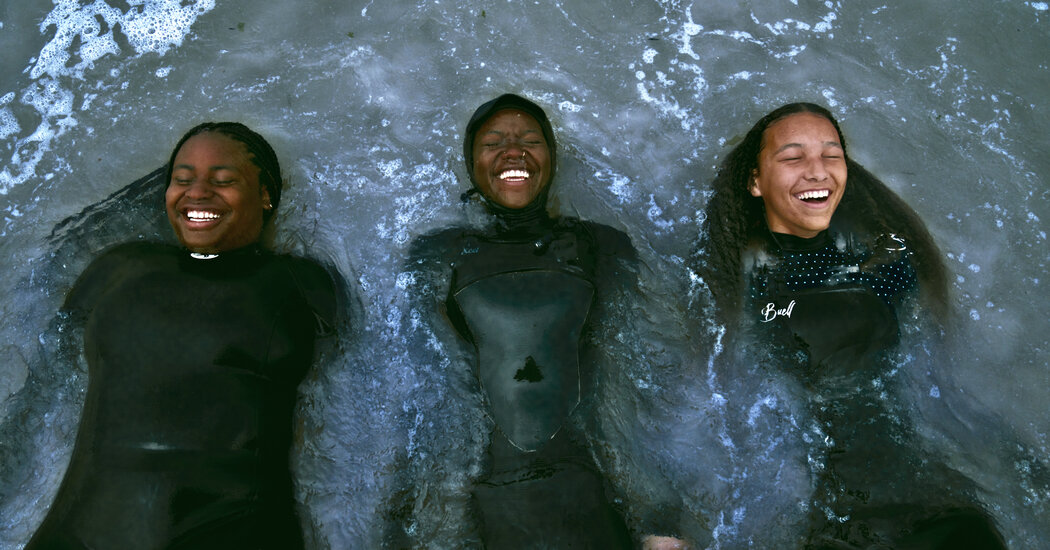 “We worked with people who are strong swimmers, who know the sport, who can predict where the surfers are going to go,” Ms. Hopkins said.

Ultimately, each of the three shoots went smoothly and the surfers were fortunate to find waves, even though the conditions were different. In California, there was a sunny, perfect day, and a cloudy early morning; in New York, the weather was overcast, rainy and windy.

Mr. Kissi worked mainly on the beach, engaging with his subjects, though he did get into the water on occasion. Mr. Maassen primarily swam in the water with the surfers, his waterproof camera close at hand, and sometimes jumped on a board himself.

“I can go on and on and on describing all of these limitations and how extreme it is, and how hard it is, and how what I do is so brave and crazy and dramatic,” Mr. Maassen said. “But in reality, it’s very simple.” He pointed out that the limitations imposed by this working environment actually removed some of the pressure to get a “flawless” shot. “It really just becomes this confluence of your ability to swim and your ability to be inspired and capture what you want,” he said.

Mr. Kissi and Mr. Maassen’s approach resulted in film and photography that carry viewers through the waves, creating a soft, intimate experience. Mr. Kissi said he was proud of reintroducing what he called a “new, rich visual lexicon of images — not only of people just swimming, but people thriving in the water, and not just surviving.”

As discussed in the text of the article by Diane Cardwell — whose memoir on surfing, “Rockaway,” was recently picked up by Netflix with Kerry Washington as producer and star — there is a notorious stereotype that Black people don’t swim, or don’t take part in water activities. As a package, this piece provides an alternative view.

“We see this as an opportunity to contribute something significant to the canon of imagery of Black surfers,” Ms. Hopkins said. “We wanted to bring powerful and evocative images that would last beyond this story and be seen by future generations.”