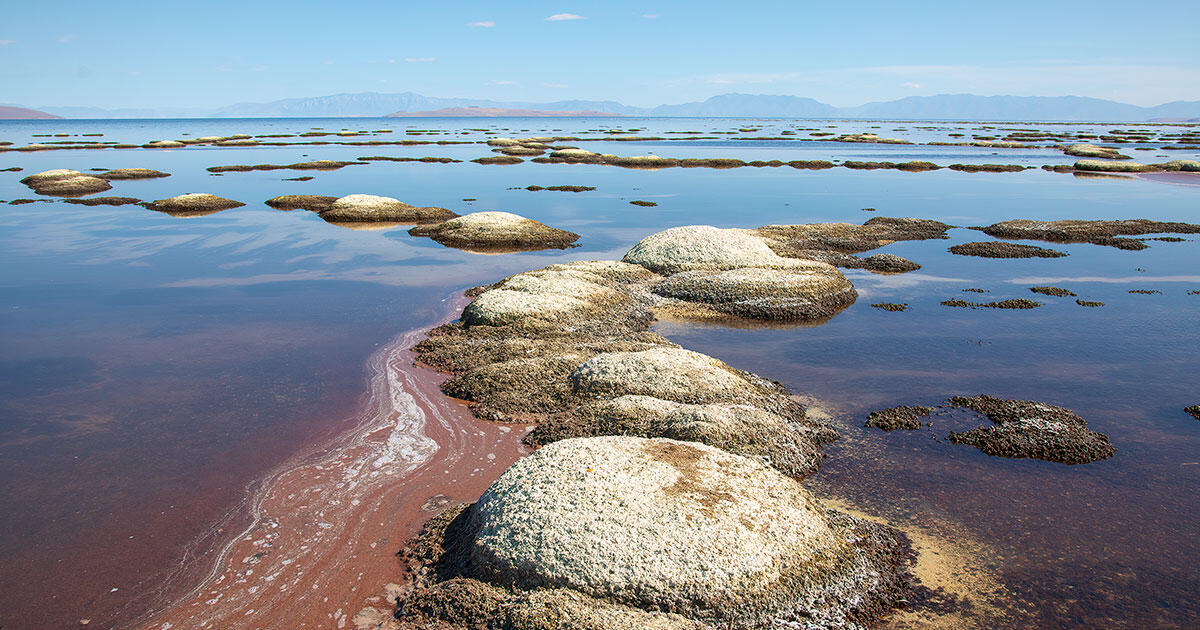 Scott Baxter has been paddling Utah’s Great Salt Lake for 30 years. He’s spent countless hours winding through the lake’s rich wetlands and out on the briny open water facing oppressive heat, big waves, and harsh winds. But this fall Baxter, a photographer and bird enthusiast, took on a journey he’d never attempted before. A month ago, he and a companion circumnavigated the entire lake by kayak—a 180-mile voyage in six days.

On the first day of the trek, the duo came upon a mass microbial graveyard. Dry, rough, circular mounds stretched far into the distance—dead microbialites. “It was a really hard feeling,” he says. “I wasn’t really prepared for that.”

Healthy microbialites look like slimy underwater rocks but are formed by a community of tiny living organisms on Great Salt Lake’s floor, a partnership between life and minerals similar to coral reefs. They grow over the course of centuries, built by microbes called cyanobacteria that use sunlight to make energy through photosynthesis. The process of cyanobacteria turning light into lunch produces a hard, mineral byproduct that forms rocky structures. Atop that scaffolding the cyanobacteria and other microorganisms form a dark mat of algae. “It’s this beautiful interplay between biology and geology,” says Bonnie Baxter (no relation to Scott Baxter), a biologist and director of Great Salt Lake Institute at Westminster College in Salt Lake City. Invertebrates feed on the algae and birds, in turn, feed on the invertebrates, making microbialites critical to the lake’s food web.

Great Salt Lake hit its lowest recorded water level ever this month, leaving many microbialiates out of the water. Exposed to the air and allowed to dry out, the algal mats die back, and lifeless, yellowing mineral skeletons are all that remain. Because they need sunlight, microbialites grow only within a narrow, 15-foot band in the lake’s shallows, says Michael Vanden Berg, a geologist for the Utah Geological Survey. Right now, the lake’s level has dipped well into the microbialites’ habitable zone.

Exposed to the air and allowed to dry out, the algal mats die back, leaving behind lifeless, yellowing mineral skeletons.

The lake and its associated wetlands and uplands support about 338 different bird species, and are a critical stopover site for millions of migratory birds every year, says John Luft, Great Salt Lake ecosystem program manager at Utah Division of Wildlife Resources. It’s also a nesting ground for waterfowl like Cinnamon Teal and Gadwalls, waterbirds like American Avocets, and the largest breeding population of Snowy Plovers anywhere. For birds, it’s “an oasis in the desert,” Luft says.

The lake’s importance for birds owes much to microbialites. Most of Great Salt Lake is too salty for fish, mollusks, and other aquatic life to survive, but birds find abundant food in the form of brine flies and brine shrimp. Both benefit from microbialites, but brine flies are especially dependent on them throughout their lifecycle, grazing on their algal mats and clinging to their surface for stability. Every stage of that lifecycle feeds birds. “Even in the winter, we have Common Goldeneye that feed on the larvae attached to the microbialites,” Luft says.

In warmer months, adult brine flies are typically so abundant that they form a thick blanket that smothers the lakeshore in a low-lying fly fog. California Gulls have been known to feed on them by simply running down the beach with their beaks agape. Snowy Plovers, Wilson’s Phalaropes, and Red-necked Phalaropes are just a few of the other birds that also favor brine flies, says Ella Sorenson, manager of Audubon’s Gillmor Sanctuary located on the southern lakeshore.

But today that oasis is drying up. At the end of July, Great Salt Lake’s surface elevation reached lows not seen since 1963. Late summer heat and lack of rain have further reduced the lake to its current level, which sits at 10 feet below the historical average. Its surface area has shrunk by more than 40 percent since federal monitoring began in 1875 due to long-term effects from agriculture, industry, and other human uses, which divert much of the water that would naturally flow into it. Plus, ongoing drought and increasingly hot temperatures linked to climate change are exacerbating the lake’s water loss.

The receding shoreline has left microbialites high and dry across the top one-third of the range they inhabit, leaving less food for brine flies. Plus, as the lake shrinks, its saltiness climbs, creating an even worse situation for the coral-like organisms, which can tolerate only a small window of salinity. Scientists worry that, as microbialites die off, the brine fly population could eventually crash, imperiling the birds that rely on them. It will take until spring, when adult flies usually emerge, to get a better sense of how the population is responding. But Luft says it seemed like the birds that migrated through the area this fall didn’t linger as long as they usually would, and preliminary data show phalarope counts falling over the past two years.

If the water levels rebound, algae can recolonize submerged microbialites and bring them back from the dead, though experts don’t know how many years that could take. And brine flies and shrimp aren’t the only food sources available; birds can find a limited supply of other insects like water boatmen, backswimmers, and midges where streams bring fresh water to the lake on its margins, Sorenson says.

Still, the microbialite die-off is a new signal of just how far Great Salt Lake has declined. It was certainly a wake-up call for Scott Baxter, the kayaker. Seeing water levels so low forced him to think differently about the place he’s spent so many decades exploring. He once thought Great Salt Lake was “invincible,” or nearly so. For more than a century people have siphoned off its water, poured in sewage, and dumped in industrial waste. “We’ve done so many bad things to that lake, and it just keeps on continuing and producing life,” he says.

But then he looked out at hundreds of yards of dead microbialites bleaching in the sun. “That’s the first time in my life that I’ve felt this lake is really vulnerable,” he says. “This was the first time I thought: ‘This lake could die.’”