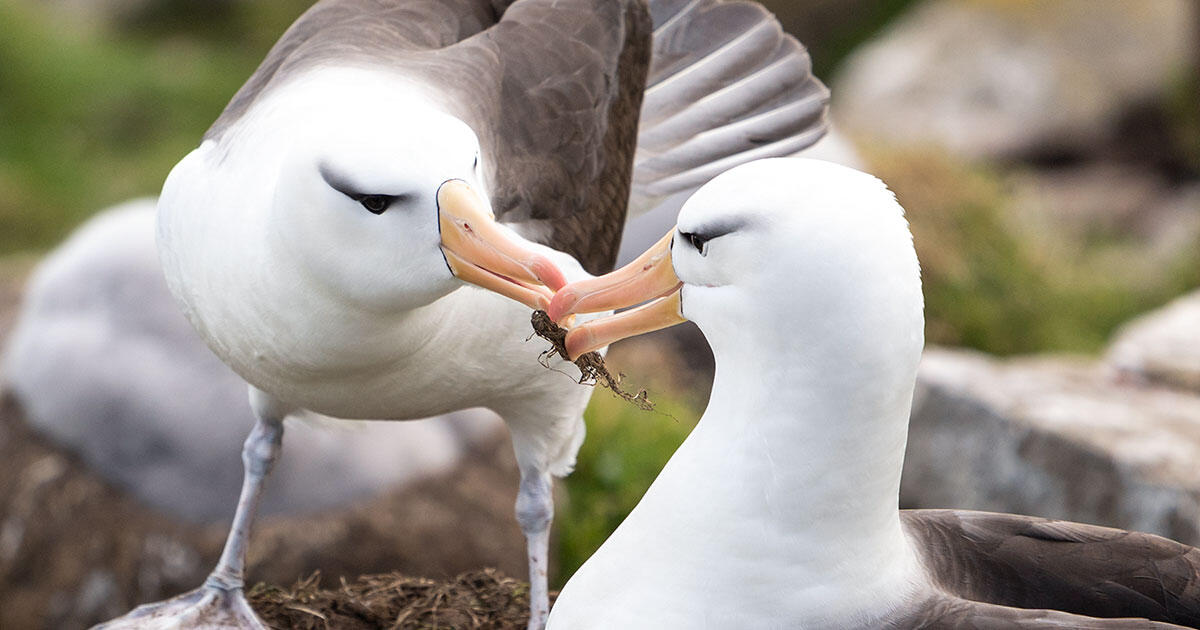 For nearly two decades, Paulo Catry has coordinated a study of Black-browed Albatrosses in the Falkland Islands. On his latest visit to the colony, he took note of bird pairs that had stayed together almost since the study’s onset. “There were still partnerships, the two same birds—16, 17 years later, they’re still on the same nest,” says Catry, a researcher at ISPA – Instituto Universitário in Lisbon. “It’s really, really nice to see.”

That is not too unusual: These long-lived seabirds typically mate for life. In fact, albatrosses rarely “divorce,” or choose a new mate while their partner from the previous breeding season is still alive. But as climate change drives up ocean temperatures, such divorces could become more common, Catry and his colleagues warn in a new paper. And that could have serious implications for seabirds that face a host of threats in a warming future.

For some species, divorce happens frequently: Emperor Penguins break up about 85 percent of the time, and two-thirds of Piping Plover pairs split. Mallards are largely faithful, with a divorce rate of just 9 percent. But albatross pairs, after spending much of the year alone at sea, almost always stay together when they return to their breeding grounds. For this fidelity, they’ve been heralded as the epitome of avian love.

Divorce among birds is actually a strategy for breeding success. If a pair doesn’t succeed in hatching or fledging chicks, at least one of them, usually the female, may choose to find a different mate the next season. “But it’s not a strict rule,” Catry says. Some birds that don’t succeed in reproducing still stay together, and some that do succeed may divorce anyway. “So failure, although it is a predictor of divorce, it’s not a very good one. So there must be other variables.”

The new findings, published in Proceedings of the Royal Society B, show that Black-browed Albatrosses were significantly more likely to divorce in years with a higher ocean surface temperature, even after accounting for breeding failure. Throughout the 16-year study, divorce rates ranged from less than 1 percent to nearly 8 percent in the warmest year. The study is the first to indicate that environmental changes can lead to higher divorce rates in monogamous animals.

One likely reason for the trend is that the fish albatrosses eat become more scarce as ocean surface temperatures warm.

One likely reason for the trend, the authors say, is that the fish that albatrosses eat become more scarce as ocean surface temperatures warm. When birds struggle to find food, raising chicks takes more energy. Previous research has shown that the toll this takes on the adults carries over into the next breeding season, making them arrive later to nesting sites. If birds that had previously been a couple arrive at different times to breed, they may find different mates. Plus, food scarcity is associated with stress hormones in birds, and stress in a relationship doesn’t bode well for its success.

“There is a sort of a partner-blaming hypothesis,” says Francesco Ventura, a bird biologist at the University of Lisbon and lead author on the study. “A stressed female might think that the male is underperforming, and this might trigger the divorce.”

But these findings reveal a deeper issue than a few ruffled feathers in some avian relationships: Increased divorce could have population-wide effects by breaking up successful partnerships, researchers say. And the authors suggest their findings may apply to other seabirds, too.

For albatrosses, raising a chick is a deeply coordinated process of alternating duties. The male and female equally take part in incubating the egg for about 70 days and feeding the chick for around four more months. The whole operation relies on both partners having success in foraging for fish and arriving back to the nest on time.

“A pair of albatross that stay together get really good at raising young,” says Don Lyons, director of conservation science for Audubon’s Seabird Institute. “They become really familiar with each other’s patterns and are able to really complement the delivery of food by their partner. So it is known that generally, pairs that work together over multiple years are more successful.”

In this way, if a pair that’s been successfully raising chicks gets divorced due to environmental stressors, they lose the benefit of a familiar mate. And after a divorce, Catry says, birds might go a year without breeding as they look for a new partner.

Fortunately, the Falkland Islands population—which represents 70 percent of the world’s Black-browed Albatrosses—hasn’t yet shown any impacts from divorce, and in fact, is growing. New Island, where the study took place, alone hosts 15,500 breeding pairs. “However, you can imagine that if you’re dealing with a population with a much lower number of breeding pairs,” Ventura says, “even one disruption of a breeding process might be an issue.”

Globally, seabird numbers have dropped by 70 percent since the 1950s due to human activity, including overfishing and climate change. These birds are put even further at risk as warming drives fish away from coasts and into deeper, cooler water. Meanwhile, nests are inundated by severe storms, and rising seas threaten to submerge these birds’ low-lying habitat. The northwest Hawaiian islands, for example, host nearly all the world’s population of Laysan Albatrosses, and these atolls are threatened by storm-induced flooding and sea-level rise. “Currently, there’s large numbers of birds—millions of albatross—but most of their nesting habitat is at risk of being lost,” Lyons says.

With all these other risks from climate change, increased divorce may not be the biggest threat albatrosses face, but it’s one more challenge complicating their future. “When climate changes,” Catry says, “there are all sorts of impacts.”