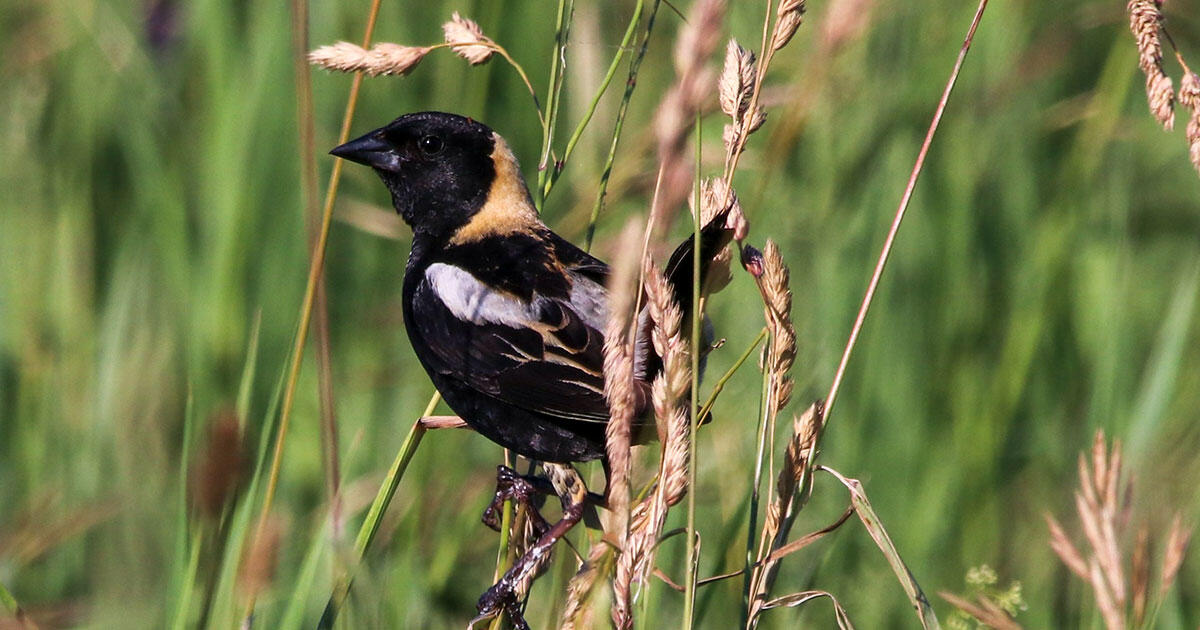 The generations of grassland birds living in the Champlain Valley of Vermont and western New York have been through a lot. Through the 19th and 20th centuries, farmers and developers razed their native grassland homes. Though most of their habitat was destroyed, some songbirds such as Bobolinks and Savannah Sparrows managed to stick it out in pockets of replacement habitat: actively farmed agricultural fields. In nesting season, birds raise their babies in hayfields located on dairy farms. But life in the hay has its drawbacks. Most grassland songbirds build nests on the ground directly in the path of farm machinery like mowers and hay balers. If the young haven’t fledged before hay harvest, farmers inadvertently destroy the nests and kill the chicks.

Now the birds’ agricultural habitat is changing again due to climate change. Until the 1950s hayfields in the region were typically ready for harvest in July, after most Bobolinks and Savannah Sparrows had finished nesting. Over the past few decades, rising temperatures have shifted forward the ideal harvest date for hay—but birds are not nesting earlier to match. As climate change compels farmers to harvest earlier in the year, the birds’ nests are at greater risk of getting run over by plows, according to research led by ecologist Noah Perlot at the University of New England in Biddeford, Maine. To survive, either the birds have to adapt to the new seasonal timing by nesting earlier—or farmers need to decide to prioritize birds over their harvest.

Hayfields are just one plant community responding to a warming planet more rapidly than the migratory birds which depend on it. While many plants are maturing earlier, some birds remain tied to their ancestral schedules and are increasingly out-of-sync in a changing world.

Perlut observed this shift in the hayfield harvest, and the birds’ failure to adjust, by following more than 1,000 Savannah Sparrow and Bobolink nests at seven Champlain Valley dairy farms from 2002 to 2019. “We caught every single bird breeding in fields,” Perlut says. “Then we followed them for their lives.” He tracked the birds through their entire lifecycle, from nest-building, hatching, fledging, and migration. He also noted when farmers destroyed nests by mowing their fields.

Over those 17 years, farmers harvested hay 10 days earlier on the average, with the harvest date advancing to May 21 from May 31. However the birds began building nests on the same day on average. Perlut’s projections of the future suggest the mismatch will grow worse: hay season will continue to creep earlier in the year while the birds’ breeding season will remain fixed, according to models.

The timing of ecological events like blooming, fruiting, and migrating—known as phenology—is “one of the most sensitive indicators of climate change,” says Richard Primack, a Boston University ecologist who was not involved in the research. In some cases, species dependent on one another are falling out of sync. For example, at Primack’s study site in Massachusetts, as temperatures have gotten hotter he’s seen trees sprout leaves so early that they shade out wildflowers before they can bloom. He’s watched tender plants flower before the threat of frost is gone.

The trend of plant-bird mismatch in North America can be explained by the fact that higher latitudes are warming more rapidly than areas near the equator, Primack says. Temperatures in the northeastern United States rose by about 2 degrees Farenheit from 1901 to 2011; conditions in the birds’ wintering grounds in the South and the tropics have changed at a slower pace. That means that the birds’ evolutionary cues to migrate north every spring lag behind the North’s advancing bloom.

“When the birds are migrating from the tropics, they don’t know what the climate is like in New England,” Primack says. Bobolinks winter in South America, centrally in Bolivia, Paraguay, and Argentina; most Savannah Sparrows winter in the southern United States and Mexico.

So far, the birds aren’t adapting to the changes on their nesting grounds. However, farmers can change their ways and manage fields intentionally to help birds survive changing conditions. “We can’t control how wildlife will respond to climate change,” Perlut says, “so we need to instead adjust how we respond.”

The problem is that changing the haying schedule comes at an economic cost to farmers, as described in the Summer 2021 issue of Audubon. Harvesting hay early or late can force farmers to buy extra feed for their animals or to lose income. But the conservation benefits are significant enough that some programs compensate farmers for their losses. The National Resources Conservation Service, a group within the U.S. Department of Agriculture, has a Vermont program that pays landowners to harvest late or otherwise adjust their schedule to accommodate the birds. Another program The Bobolink Project, run by Mass Audubon, Audubon Vermont, and New Hampshire Audubon, collects donations from the public and uses the funds to directly compensate farmers for delayed hay harvests. In 2018 the project raised more than $50,000 to protect nearly 1,000 acres of New England hayfields.

For many farmers, it’s not enough money. The landowners most likely to change their harvest practices don’t depend on their farmland for profit, says Alan Strong, a University of Vermont ecologist who collaborates with Perlut and works closely with the Bobolink Project. Those whose livelihoods rely on their crop may be less willing to change their ways.

Then there is another set of farmers who do it for the Bobolinks. “There are some participants who are interested in birds and who might delay mowing their fields even if they didn’t get paid for it,” Jon Atwood, director of bird conservation at Mass Audubon, told Audubon in the Summer 2021 issue.  “There are other farmers who would just have to go out and mow their fields in order to make their business plan work. Regardless of motivation, the fact that there are farmers who are willing to modify their practices for the good of grassland-nesting birds is pretty cool.”