Two Fantastic Warblers Anyone Can Find 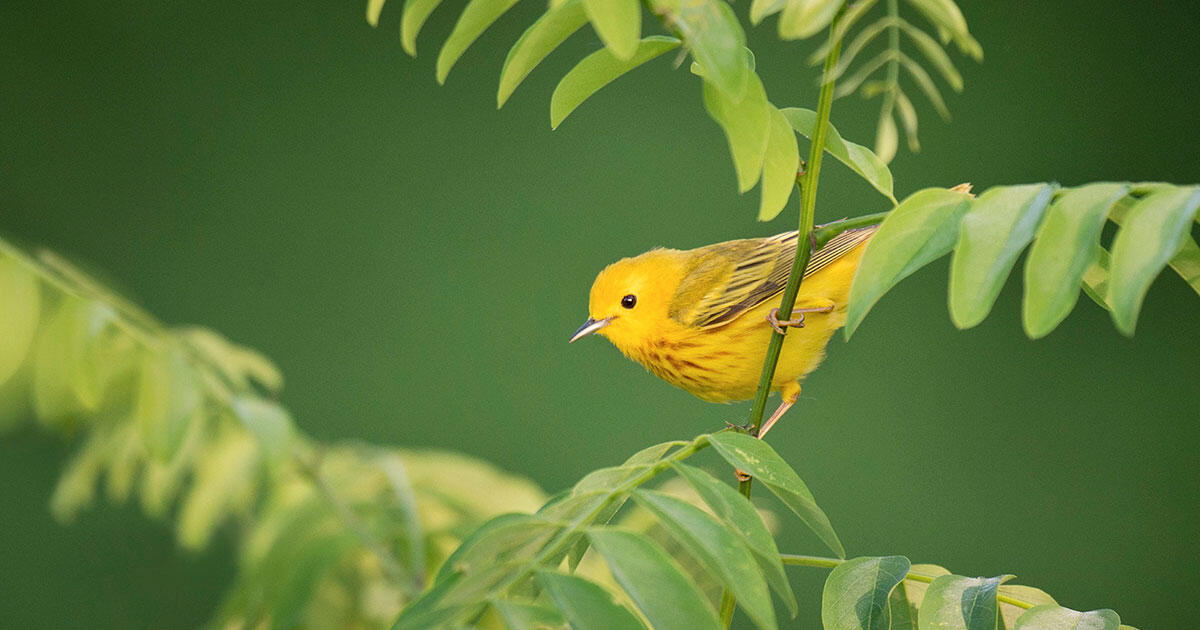 Warblers can be an intimidating bunch for new or casual birders. This is doubly true during spring and fall migration, when hoards of unfamilar species pass through much of the country heading to their northern breeding grounds or south to overwinter, respectively. Suddenly, literally overnight, there are birds everywhere! And many of them are tiny, quick, and located high up in the canopy—usually behind a stupid clump of leaves. What’s more, in spring, many warbler species sound similar and, more often than not, sport some shade of yellow. Meanwhile, in fall, most of those same birds have lost all of their bright plumage and require a totally different set of ID knowledge that even gives experienced birders trouble. So, yeah, it can all be a bit overwhelming.

But as with anything else in birding, learning to identify these neotropical migrants in either season takes time and practice. For those interested in upping their warbler game, one way to begin is to have target species that you can specifically seek out and get to know. Familiarizing yourself with some of our more common warblers will also help you start learning the difference between them and more elusive species or those that only pass through during migration. Fortunately, in North America, we have two excellent warblers that you can easily find during migration and, to varying degrees, throughout the summer from coast to coast: the Yellow Warbler and the Common Yellowthroat.

Finding these birds isn’t always a given, but there is one reliable way to regularly see both of them: Head to some of your local freshwater spots. Whether it be a pond, lake, stream, or river, you’re likely to be rewarded with at least one of these birds.

The Yellow Warbler didn’t get its name by mistake. This striking species sports luminous, lemon-yellow plumage that stands out from a distance. Up close, once you have this bird in binocular view, you’ll be able to appreciate its finer details, like that perfectly pointy black beak, the contrasting gray wings, and those lovely rufous breast streaks. Yellow Warblers are real stunners, and while they are found in any woody habitat—especially along the edges—they can be routinely spotted in trees flanking any type of freshwater.

That said, seeing them isn’t always easy. During spring and summer, these small birds can be tough to spot as they move among branches gleaning food from similarly colored leaves and catkins. Fortunately, Yellow Warblers have a distinctive, high-pitched song that helps you track them down: sweet, sweet, sweet, sweeter-than-sweet. While thin and airy, it’s an easy one to identify once you learn it. When you hear that tune along the water’s edge, that should be your signal to start searching the boughs of nearby trees—paying extra attention to lower ones hanging over the water—until you see some movement. When you do, prepare to be delighted.

Common Yellowthroats are great birds. Just look at that male with his bandit mask, acting like he’s about to steal your bins. And the female, while lacking the male’s visual bravado, still sports a bright yellow throat that complements her abundant olive tones. It’s impossible to see a Common Yellowthroat without getting a little jolt of joy. Good thing they are widespread across most of the country and also fairly easy to see. Like the Yellow Warbler, they can be found in a variety of habitats, but they prefer dense brush, thickets, and marshes. In fact, this is the only warbler north of Mexico that has adapted to nesting in marshes. As such, Yellowthroats are reliably found around water, often often lurking down low among the reeds, cattails, and other shrubbery.

In terms of behavior, Yellowthroats act a lot like wrens, furtively sneaking about until they suddenly pop out into the open to perch atop a bush or grab hold of a reed while belting their songs. Because of this, they sometimes take time to locate. They are never hard to hear, however, and listening for their clear, insistent witchety, witchety, witchety, wit song is the best way to pinpoint the bird’s location. Once you do, wait for movement, and eventually—and that can be a long eventually with Yellowthroats—your patience is usually rewarded

Of course, water is a big attraction for all species, especially during migration, so keep an eye out for anything else in the branches or bopping along the water’s edge. In the South, perhaps you’ll get lucky and catch sight of the only warbler more yellow than the Yellow Warbler: the Prothonotary Warbler, known as the swamp candle for good reason. And in the East, Lousiana Waterthrushes, which are actually warblers, can be found bouncing their bums along the water’s edge. Though not as common out West, the Northern Waterthrush also can be spotted on banks across the country. And that’s just to name a few possible species. You never know what you might see around the water, and as is always the case with birding, that’s part of the fun.