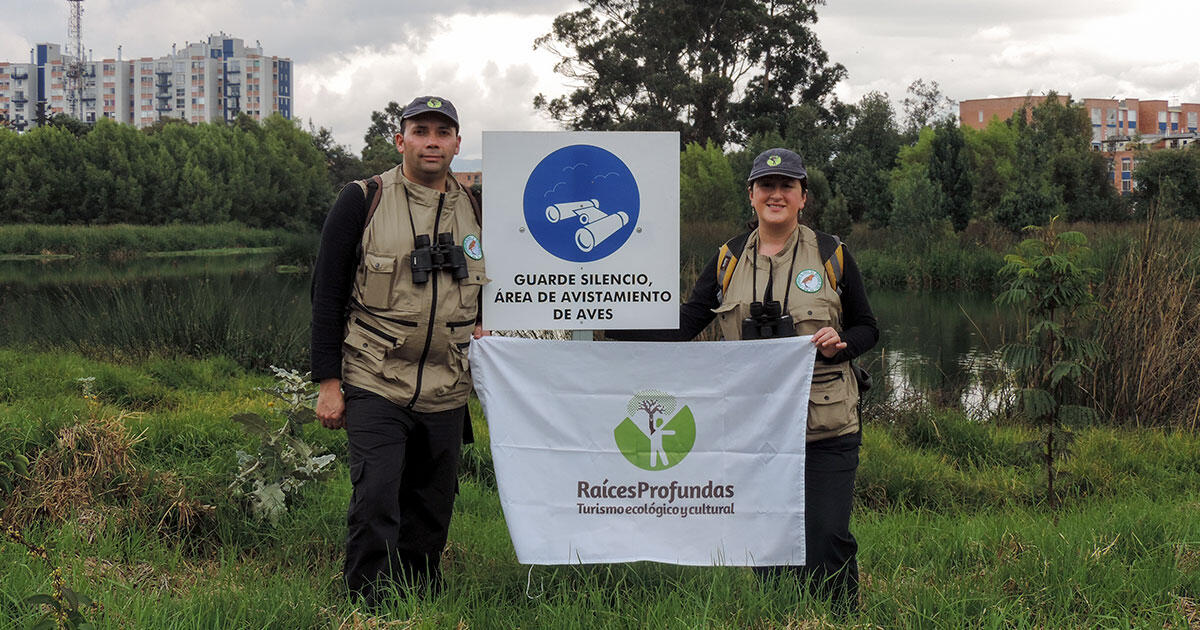 It was pouring rain in Bogotá, Colombia, last Monday when Liliana Marcela Ospina Sanchez first thought about protesting this year’s Global Big Day, when birders across the world tally their sightings on the eBird platform. Ospina, a business owner and ecotourism guide, was doom scrolling through social media. The hashtag #SOSColombia was trending.

Since April 28, local NGOs and citizens have used social media to document widespread police violence during a national strike. Tens of thousands of people took to the street to demonstrate against a controversial tax reform bill that opponents said would disproportionately affect the poorest people in a country whose economy has been decimated by Covid-19. The tax reform that sparked the demonstrations was withdrawn on May 2, but the demonstrations continued, as the country faces high unemployment and poverty rates due to the pandemic.

Ospina thought about the people protesting in the rain just outside her home. At the same time, she says, “I was seeing these posts like ‘Let’s go birding on Saturday for the Global Big Day!’ ‘Let’s be number one again!’ That’s when the conflict inside me started.”

Last year more than 50,000 people from 175 countries took part in the Global Big Day. Since 2016, Colombia, the most biodiverse country in the world per square mile, has been the winner of the Global Big Day, with participants recording as many as 1,590 bird species in one day.

This year, vying for the international bragging rights amid so much turmoil felt wrong. On Tuesday, Sanchez and her husband and business partner, Juan Carlos Rubiano Reyes, took a stand in solidarity with the protesters. Citing the current pain of the country’s “forests, birds, environmental leaders, peasants, and people,” they announced in a Facebook statement on the page of their ecotourism company, Raíces Profundas Turismo Ecológico y Cultural, that they would not participate in this year’s Global Big Day on May 8.

The decision sparked heated conversations among Colombia’s birding community and inspired others to take action, too. By Wednesday, two universities, two ornithological societies, local bird groups throughout the country, and hundreds of individual birders had joined the boycott. In an informal poll on the Facebook page of the Red Nacional de Observadores de Aves (RNOA), the biggest network of birdwatchers in the country, 130 people said they also would not participate in this year’s Global Big Day. In contrast, 11 said they would, and five said they would go birding but wouldn’t upload lists to eBird.

Those boycotting hope that their absence will raise awareness among the international birding community about the critical situation in their country. The goal, as birder and biologist Jeancarlo Sánchez puts it, is “that the eyes of the entire birding world suddenly sees that Colombia is not there. That we’re missing, that we’re not in the first places in the ranking and that they wonder why.”

Before the national strike, the pandemic had birders already wondering if they could safely engage in this year’s activities. The country is enduring its third COVID-19 wave, with ICU occupancy at nearly 95 percent in some regions, and only 3.5 percent of the population has been fully vaccinated. After protesters blocked highways and the violence escalated, it became even more uncertain that people could safely go birding on May 8, says Felipe Estela, who had coordinated the Global Big Day in Valle del Cauca, southern Colombia, and decided to join the boycott last Wednesday. The violence in Cali, his hometown, has been terrifying in recent days. “We hear bullets, bombs. I’ve never, ever experienced anything like this,” he says. “It’s a situation of permanent angst.”

Still, many have decided to take a stand: “We can’t celebrate bird’s day in a country that’s cutting our wings,” says birder Julian Ávila-Campos. In nine days of protest, at least 24 people have been killed, including young students like 19-year-old Santiago Andrés Murillo, and 22-year-old Nicolás Guerrero. Their deaths have become the worst examples of the widespread violence in the country. Some NGOs have registered as many as 1,773 claims of police violence episodes, including 11 cases of sexual violence.

Some boycotters, like biologist María Paula Camelo, hope their absence will also call attention to assassinations of environmental leaders in Colombia, the deadliest country in the world for environmental activists. Earlier this year, Gonzalo Cardona, a beloved birder who dedicated his life to protect the ecosystems where Yellow-eared Parrots live, was assassinated for his environmental work. If every bird counts, Camelo says, that is because a birder has counted it. “Every dead birder should count, too,” she points out.

Support for the Global Big Day boycott is far from unanimous. Some feel that it politicizes birding, which should remain a “neutral space,” as the RNOA wrote in a statement. The RNOA erased posts about the boycott, but later apologized and made a call to respect everyone’s opinion. (It did not republish the deleted posts.) Some groups like the Sociedad Ornitológica de Antioquia (SOA) started to ban birders who mentioned the topic from WhatsApp or Facebook groups. One of the birders, Angela Caguazango, says that this practice is “unacceptable, especially in a country where censorship has sparked so much violence.” SOA declined to comment for this story.

Before the national strike erupted, the birding community planned to honor Cardona’s memory during Global Big Day. Many plan to participate in part to keep that promise. Others, like Jorge Muñoz, director of the Asociación Ornitológica de Caquetá, are aware that taking a top spot in the Global Big Day could help bring much-needed funding and support to local ecotourism initiatives. The region where Muñoz works was heavily ravaged during the worst days of Colombia’s civil war, and ecotourism is slowly becoming a financial alternative for peasants and former members of the FARC guerilla trying to reintegrate into civilian life. It would be unfair to abandon them, he says. Rural communities have been preparing for the event for months.

Ospina, who inadvertently started the protest, says she only intended to use the tactic of silence during Global Big Day to bring attention to the country’s situation. She’s inviting everyone to upload photos, songs, drawings, poems, or any art form to social media to showcase that without people defending and taking care of the land, there’s no No. 1 for Colombia. “We want to be recognized because of our birds,” she says, “but without ignoring the reality that we have here.”