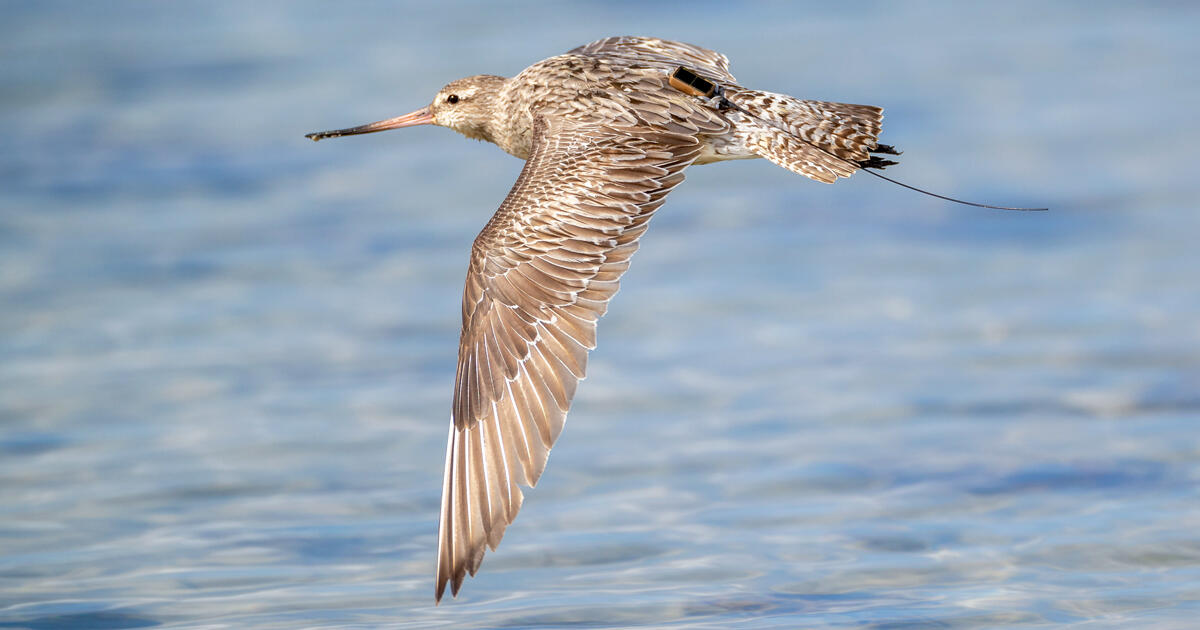 On September 28, one small bird completed a very long flight. An adult, male Bar-tailed Godwit, known by its tag number 4BBRW, touched down in New South Wales, Australia, after more than 8,100 miles in transit from Alaska —flapping its wings for 239 hours without rest, and setting the world record for the longest continual flight by any land bird by distance. And 4BBRW isn’t even done yet. In the next few days, the Godwit is expected to end its southbound migration in New Zealand after its well-earned island stopover, says Adrian Riegen, a builder from West Auckland and a passionate birdwatcher.

From his home office, usually reserved for managing building projects, Riegen keeps tabs on 4BBRW and 19 other Bar-tailed Godwits fitted with solar-powered location trackers. During migration season, he spends at least an hour each morning going through the most recent location data and writes a daily report for the ongoing project, run by the Pūkorokoro Miranda Shorebird Center, an education and research nonprofit in Miranda, New Zealand, where many Godwits spend non-breeding months. All of the best tidbits he compiles are disseminated to the center’s followers on Facebook and Twitter, so that people can follow along with the birds’ cross-hemisphere, trans-oceanic journeys—speed bumps and all.  “It’s such an amazing story,” Riegen says. “We want to share it as widely as we can.”

Although 4BBRW’s feat is astounding, it may not be particularly surprising. Bar-tailed Godwits are incredible migrants: Individuals have broken the “longest, non-stop, migration” record more than once since satellite tracking began in 2007 and regularly make continuous flights of more than 7,000 miles.

In fact, 4BBRW previously held the world record for his 2020 flight of 7,580 miles. And just three days before 4BBRW’s 2021 touch-down, a female godwit, tagged 4BYWW, completed a trip of a similar distance that was briefly considered the record. While multiple subspecies of Bar-tailed Godwit make long distance journeys around the world, the New Zealand-Alaska population travels the farthest in its migration loop. “It’s this thing of imagination and magic that we have in this world, to think this tiny little bird traveled thousands of miles,” says Audubon Alaska executive director Natalie Dawson.

Unlike albatross or other long-flying seabirds, godwits are active flyers, not gliders—their wings are moving the whole time. “It just beggars belief, really,” Riegen says. “I mean, though I’ve known that for decades now, I still find it hard to imagine how anything can keep up that sort of effort 24-hours a day, without taking a break.”

Unlike albatross or other long-flying seabirds, godwits are active flyers, not gliders—their wings are moving the whole time.

Godwits begin their lives along coastal and estuarine breeding and nesting territory in Alaska, from the Yukon-Kuskokwim Delta to the North Slope. To feed, they use their long beaks to pull crustaceans, mollusks, and insects out of sticky mud. “Move, feed, move feed—always active,” Dawson says. Juveniles can fly at just 30 days old, and by the end of their first summer, almost all congregate on the Yukon-Kuskokwim mudflats to fuel up. From there, only a few months after hatching, young Godwits join the previous generations and undertake a taxing first migration. Some birds will stopover in New Caledonia or Australia, as did 4BBRW, but many head straight to New Zealand.

The exact distance traveled varies from flock to flock and individual to individual. The birds make navigational decisions to optimize favorable winds and avoid severe weather—and one tenth of a degree of difference in the starting angle could add or subtract mileage. Even with all these variables, godwits are startlingly accurate and consistent, returning to the same sites year after year and setting off on their migrations within a window of a few days. “There’s one particular bird that goes [north] almost exactly on the 25th of March every year and has done for 13 years,” Riegen says.

When it’s time to return to Alaska in March and April, the Bar-tailed Godwits follow a slightly different path, detouring to mudflats in parts of the Yellow Sea, before continuing. And this stopover habitat has been rapidly disappearing in recent decades, which was part of the reason the Pūkorokoro Miranda tracking project began in 2019, in collaboration with other institutions in New Zealand and abroad. Globally, godwit populations have been declining amid growing threats of habitat loss and climate change. Researchers who follow this population want to know if the birds are adapting to habitat loss and finding other migratory routes. They’re also hoping to understand how young birds move around and select their non-breeding sites in New Zealand.

Only two years in, and the work has already yielded some surprising results. After the birds’ initial journey from Alaska, ornithologists previously believed that juveniles spent their first few years in New Zealand looking for the sites they’ll return to in the future and not moving around too much. Godwits don’t reach breeding maturity until about 3 years old, so there’s no reason for them to take the risk and waste energy flying back to Alaska before then. But tracking data has shown that young godwits do undertake big, additional flights early on. Young birds often join up with migrating adults—making test flights up to 1,000 miles—before they turn around, realizing they’re underprepared for the trip, says Riegen. And, in at least one case, a tagged, immature female bird completed the whole migratory cycle.

Adults, too, succeed in the face of incredible odds regularly. One bird this year, tagged 4BWRB, departed from Alaska and flew 1,300 miles before hitting severe weather and turning back. Despite that false start, it tried again and reached New Caledonia just 17 days after its initial attempt.

“You know, whatever we predict they rubbish us: just say, ‘you’ve got no idea what we can do,’” Riegen says. The birds’ ability to cope with extreme adversity makes the story of the Godwits an easy one to get people excited about, he adds. “If your passion is nocturnal, endangered snails, you know, it’s much harder to sell that to the rest of the world. But people can grab this story, and they can go and see godwits.“

Ultimately, he believes that the more people meet these birds, virtually or otherwise, the more likely they are to be protected—which has made the hours writing Facebook posts worthwhile. He frequently encounters birdwatchers who come to Pūkorokoro Miranda after having first learned about the godwits online. “They say, ‘well, I’ve been following this story and I had to come and see for myself.’”