The ‘Kill Bill Tanager,’ a Species New to Science, Finally Has a Real Name 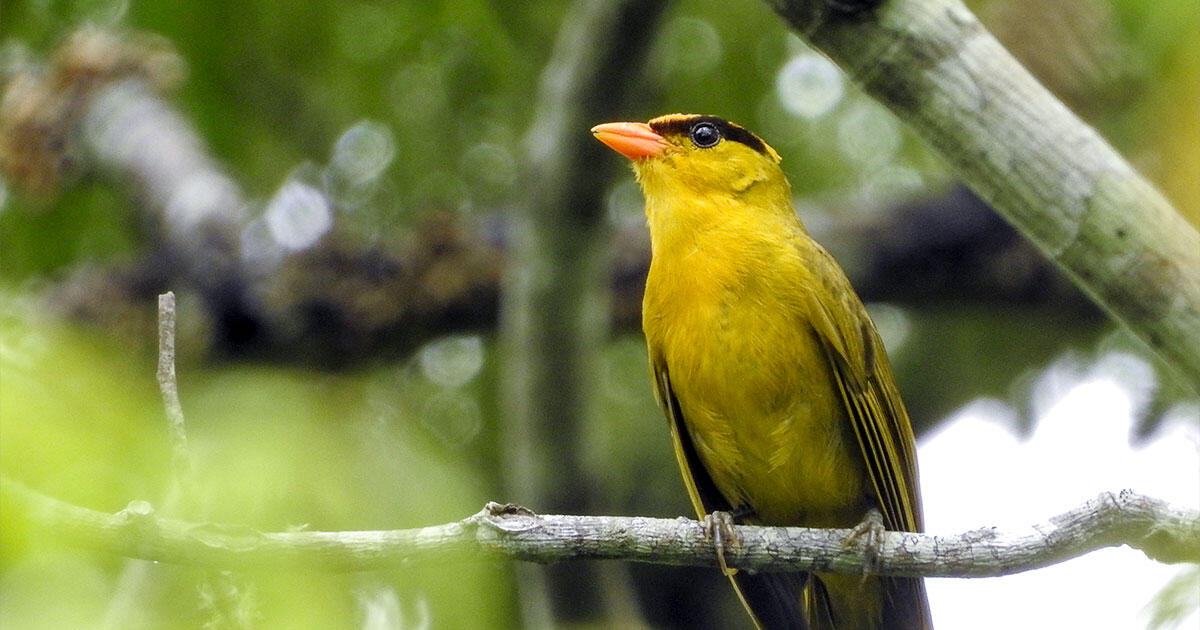 A stunning new species of South American songbird has just been described to science. In a paper published by the American Ornithological Society in October, an international team of experts introduced the Inti Tanager (Heliothraupis oneilli), a bird so distinctive that it is classified in a new genus by itself. Although this publication is new, it resolves mysteries that have lingered ever since the first remarkable sighting of this gloriously yellow bird 21 years ago.

On October 10, 2000, American ornithologists Daniel Lane and Gary Rosenberg, experts on tropical birds, were leading a tour group on a well-explored route when a sprightly, warbling song from the forested hillside caught their attention. The Kosñipata road in southeastern Peru had been a popular birding destination for years: Running from highlands to lowlands through rich tropical forest, with changes in birdlife at every elevation, it lets visitors access habitat for close to 1,000 species. Biologists thought they knew its avifauna relatively well.

But this song was something new. Rosenberg recorded it and played it back. Lane spotted the bird on a distant high branch, and both men had a brief view through a telescope. Then, to their consternation, it flew off, crossing a ridge out of sight. The image burned in their minds: a brilliant yellow bird with a black head stripe and pink bill, unlike anything known for the region.

“My first wild impression was it looked like an Old World oriole, something like a Black-naped Oriole from Asia,” Lane says. “Since that was obviously impossible, my next thought was that must be a tanager. Gary also thought it had to be a tanager.” It didn’t match any known species, though, leaving them perplexed and excited.

The ornithologists had to leave the area that day, but they returned to search for the yellow bird. Over the next two years, they found no sign of it. Lane made a careful sketch of what they had seen, and sent it around to other South American experts. Everyone agreed: They had never seen anything like it.

Then on October 7, 2003, Lane and Rosenberg were back in Peru at the Kosñipata road leading another group when they heard the same song. This time everyone in the group got good views of the bird. The news exploded birding and ornithology circles, and the mysterious creature soon achieved the status of legend. Someone pointed out that its colorful plumage suggested Uma Thurman’s bright yellow jumpsuit in the 2003 Quentin Tarantino flick Kill Bill: Volume One, leading to an irreverent nickname: the ‘Kill Bill Tanager.’ Everyone wanted to know more about it.

Discoveries of new bird species like this one are rare. South America has more than 3,400 bird species, more than any other continent, and a few new ones are discovered almost every year. Some of these finds are cryptic: very similar to known species, distinguished mainly by voice or other subtle clues. Others stand out as unique creatures, but live in isolated habitats previously unexplored by biologists. The Kill Bill Tanager, on the other hand, was a well-marked, bright yellow bird living along a well-traveled road. How could it have gone unnoticed until now?

The discovery also came at a moment when ornithology was rewriting the rules of tanager taxonomy, adding to the frenzied fascination. In the early 2000s the tanager family (Thraupidae), originally defined by aspects like moderately thick bill shape and bright plumage color, was being redefined by new DNA studies that reveal relationships among species at the molecular level. The new classification shows, for example, that North American species like Scarlet Tanager and Summer Tanager are actually members of the cardinal family. Meanwhile, seven South American species of “cardinals,” including the Red-capped Cardinal, are now classified as tanagers, and so are various other birds formerly regarded as finches, honeycreepers, or seedeaters. So even though a specimen of the new bird was collected in 2004, biologists needed more time and more information to decide what it was.

The next breakthrough came in December 2011, more than 200 miles away from the Peru site. In semi-deciduous forest of the foothills in the Machariapo Valley in northwestern Bolivia, ornithologist Frank Rheindt heard an unfamiliar song. When he tracked down and spotted the singer, he realized it matched the mystery bird from the Kosñipata road.

Remarkably the Machariapo Valley had also been previously surveyed by biologists—but only in the dry season. Rheindt was there during the rainy season, and so was the new bird. In fact, it was fairly common: multiple individuals sang from forest along the ridge tops. Rheindt had finally discovered a population that could be studied. Teams of U.S. and Bolivian ornithologists visited the region in 2012, 2013, and 2019 to gather more information about this beguiling bird.

“Inti” is an ancient Indigenous word for the sun, used in the modern Quechua and Aymara languages.

The fascinating picture that emerged is a tanager that stands on its own. The tanager is so distinct genetically that scientists placed it in its own new genus, Heliothraupis, translating loosely to “sun tanager”—reflecting the bird’s golden hues and preference for sunny, dry forest atop ridges. Its common name is Inti Tanager in English (or, in Spanish, Tangara Inti): “Inti” is an ancient Indigenous word for the sun, still used in the modern Quechua and Aymara languages of the region.

Also unusual is that the Inti Tanager migrates within the tropics. It spends the rainy season (at least November to March) nesting in semi-deciduous forest in northwestern Bolivia. For the dry season (about June to October) it apparently moves to lower slopes of the Andes in southeastern Peru. (In the latter region it’s known only from the Kosñipata road so far, likely because few roads allow biologists access to its habitat, Lane says.) Ornithologist Ryan Terrill, another coauthor of the new species description, calculated that the potential nonbreeding habitat could cover 10 times as much area as the breeding range. That helps explain the numbers observed in Bolivia, where it’s concentrated, compared to the rare individual along the road in Peru.

Biologist Miguel Angel Aponte Justiniano, an associate of the Noel Kempff Mercado Museum of Natural History in Santa Cruz, Bolivia, played a key role in the expeditions to study the tanager and was a coauthor of the paper describing it. The news of the new species is being celebrated with great joy among Bolivian biologists and birders, he says. Observing the Inti Tanager was one of his most exciting experiences, Aponte told me, but so is the process of making the species known to the scientific community and to the public at large.

Everyone involved with the project seemed to react the same way. For Daniel Lane, the paper’s lead author, this classification was a way to close a circle from his youth. As a pre-teen birder in the 1980s, Lane read an article about John O’Neill, whose work through Louisiana State University Museum of Natural Science had produced so many discoveries in South America. O’Neill’s career got off to a spectacular start when he discovered a genus and species of tanager new to science in Peru in 1963. Later, O’Neill directed numerous LSU expeditions to the tropics and taught generations of young ornithologists such as Lane, Rosenberg, Terrill, and many others, including many from South American nations. So when Lane had a new genus and species of tanager to describe to science, also discovered in Peru, it was satisfying to name the species for this mentor: Heliothraupis oneilli.

What does the future hold for the Inti Tanager? Aponte is cautiously optimistic. The bird is known to breed in forest with some protections: the Natural Area of Integrated Management (ANMI) associated with the Madidi National Park. It may yet be found within the park itself. These are among the most biodiverse areas in Bolivia, Aponte says, and the habitat is important for many other birds, including the scarce and vulnerable Military Macaw. The area is also turning out to be an important wintering site for Connecticut Warblers, migrants from North America whose nonbreeding range is poorly known.

Still, Aponte says, science needs to learn more about the Inti Tanager’s natural history to better protect it. Its breeding habitat in Bolivia seems safe for the moment. But like everywhere else in the world, these areas’ preservation will depend on continuing effort and vigilance. The presence of this beautiful and unique tanager, and the fascinating and inspiring story of its recent discovery, provide more reasons to conserve these priceless habitats.