The Fastest-Ever Tour of the Audubon Mural Project in Harlem 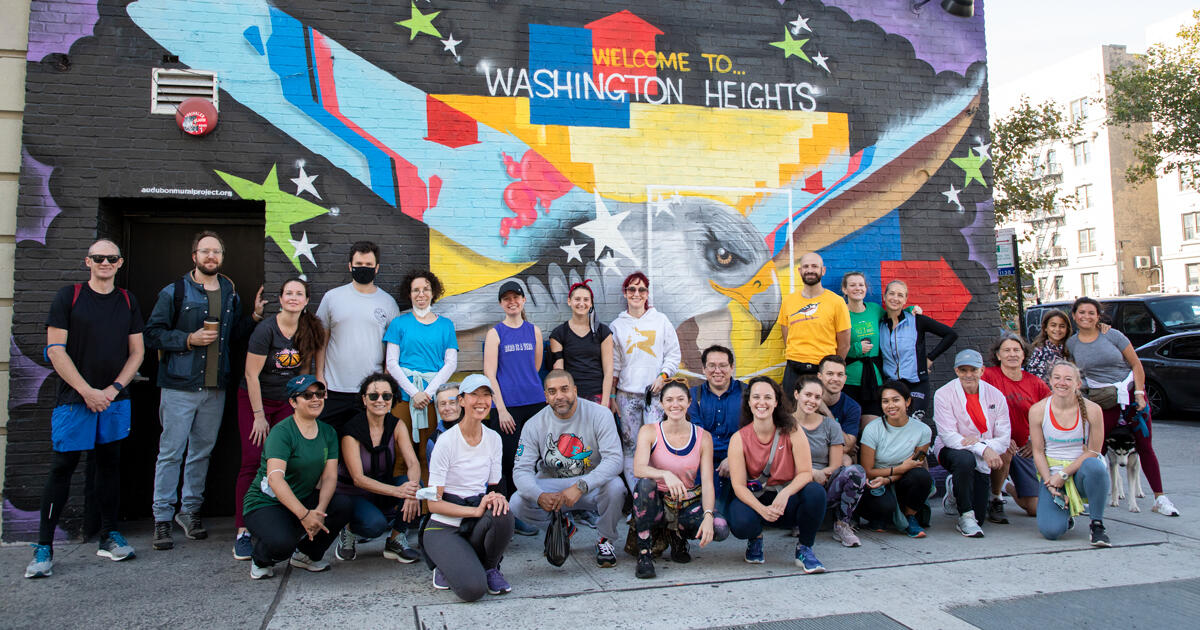 It’s 9am in Harlem on the first Saturday in October. The crisp morning air and clear skies suggest it’s a perfect day for morning activities—like birdwatching or running. It’s generally considered difficult to do both of these at once, but a small crowd of runners gathered outside the restaurant Harlem Public for the Audubon 5K Art Run is preparing to do so in a highly unusual way.

The birds they’re seeing today aren’t live, but painted onto business security shutters, on panels installed above subway stations or stores, or building facades. With 90 bird murals painted within a several-block radius, the runners will seek as many as they can while running in a 2.8 mile circuit. Marnie Kunz, owner-operator of Runstreet, helped make today’s gathering possible. The event company has combined running with public art to create one-of-a-kind ‘art run’ events across the country.

“Since art runs aren’t races, they have a more relaxed atmosphere, and people talk to each other,”  says Kunz. “And at this event, all the murals are birds, so it’ll be really fun and educational for everyone. I don’t usually do art runs where all of the art is on the same theme.”

The Audubon 5K Art Run is the brainchild of Audubon art director Kristina Deckert, who was inspired by a Runner’s World article that quoted Kunz.

“[Marnie] referenced the art runs she started in 2015, and I immediately thought it’d be a great fusion of three things I care about: art, running, and birds,” says Deckert. “I reached out and she was all in.”

The crowd is full of people dressed in exercise gear awaiting the run to start. As I take in the scene, I see the first mural of the day right behind me—a Mountain Bluebird on the gate of a tattoo shop. The photographer directs my attention to another one across the street—two Ovenbirds amidst a colorful spray paint haze. These murals are part of the Audubon Mural Project, a joint public-art initiative of the National Audubon Society and Gitler & _____ Gallery launched in 2014. Most of the murals are clustered in Northern Manhattan, where bird artist John James Audubon once lived and is now buried.

Gitler & _____ owner Avi Gitler has invited dozens of artists to participate in the project to paint their chosen birds on walls, doors, and security gates. He also designed the route to create the optimal exercise and mural viewing experience.

“The route echoes the same walking tours I’ve given dozens of times over the years,” said Gitler. “I wanted to provide the runners with the best distance and best spots for seeing the murals.”

Beyond adorning the neighborhood with striking installations, there’s a greater purpose to these murals. All birds depicted in the project are jeopardized by climate change. Commissioned artists choose which bird to paint from a list of 389 at-risk species identified in Audubon’s Survival by Degrees Report. While Gitler thinks the project inspires people in different ways, many will draw the inevitable connection between these birds and the rising temperatures that threaten their livelihood.

“People might see a mural of a bird they think is pretty commonplace, like a Mallard, and it might shift their feelings to know this bird is also threatened by climate change,” said Gitler.

Deckert says she’s even more aware of the changing environment after improving her running skills, especially during the hot weather.

“Every time I go out for a run, I check the weather and adjust my run accordingly,” she said. “Different temperatures have massive effects on our runs, [and] air quality has a huge impact on our lungs’ ability to breathe while we run.”

Non-birder runners also shared some of the dire sentiments about the changing climate. Brett Cohen, a golf trainer from Queens, said the endless cycle of bad news is a source of anxiety.

“It’s very clear when you watch the news that the earth is changing,” says Cohen. “After living in New York for so long, it’s obvious our winters are different. The snow we used to get has diminished dramatically.”

Cohen found out about the Audubon 5K Art Run after previously attending an art run with Runstreet in Chinatown. A lifelong runner, he knows runners depend on a healthy environment, but claims the running industry leaves its own significant carbon footprint.

“Between bag drops and long-distance traveling [for running excursions], we ought to be more conscious,” he says. “We’re not only using Mother Nature but taking from her as well.”

Immediately after, Kunz takes off at the starting point. The crowd trails her, kicking dust behind me. They loop through the streets of Washington Heights and point out warblers on security gates. They stop to admire giant murals of Evening and Black-headed Grosbeaks, a Fish Crow, and a Swallow-tailed Kite made up of other smaller birds.

Although I take shortcuts, the group moves briskly. I peel off my jacket and catch my breath. Between exhales, I spot plenty of peculiar painted birds without even trying—a Black-throated Blue Warbler as an ‘80s Nintendo sprite; an eerie Whiskered Screech-Owl; a Canada Goose wearing a Yankees hat and Timberlands.

I catch up with the rest as they approach a White-tailed Hawk mural. A man in a bejeweled sweatshirt turns the corner. Gitler introduces him to us as TOTEM—Washington Heights native, medical technician at New York-Presbyterian, and the graffiti artist behind the installation. TOTEM’s mural shows the raptor’s sharp talons and stare, with overlapping shapes in primary colors accentuating its ferocity. According to the artist, he found that he strengthened his own connection to nature through the power and beauty of the White-tailed Hawk.

“We connect to animals in a lot of ways, especially birds,” says TOTEM. “They’re always trying to send us a message, you just have to know how to grab it.”

A few blocks later, the run ends and the crowd begins to disperse. Some brunch in outdoor cabanas; some admire pictures they took while on the run; others pick up copies of the Survival by Degrees report or hear about the history of the mural project from Gitler. People depart with lots of new information, including Kunz, who’s reevaluating how she thinks about climate change.

“I didn’t even think about how many bird species or how migration patterns would be affected by rising temperatures,” says Kunz. “As humans, we don’t always think about other animals, so I really thought more about all the wildlife we could lose.”

As participants leave the event with either a newfound or bolstered appreciation for birds and the habitats they need, Deckert hopes the runners realize their fates are inextricably tied to those of the birds they saw.

“The good thing is that runners keep showing up, even when it’s hard,” says Deckert. “[I hope] they’re inspired to act to help save the environment we all share.”