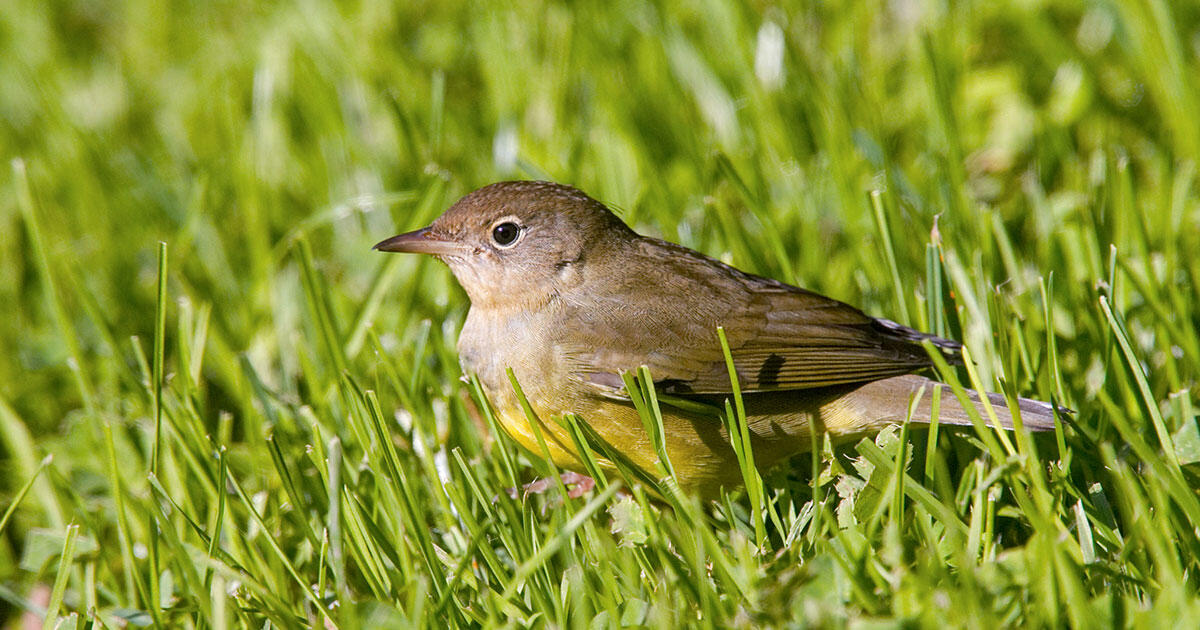 Retiring and infamously tricky to observe, the Connecticut Warbler is one of North America’s least known bird species. Usually chanced upon by lucky birders in migration, particularly in the East during fall, this large, primarily ground-dwelling warbler is one of the most sought-after migrants. Thus, it comes as no great surprise that birders surround this species in hyperbole and think of it as equal parts myth and feather.

But Connecticut Warblers are not just baffling for birders; they are one of North America’s most mysterious birds for researchers as well. Fortunately, thanks to advancing tracking technology, the closely guarded secrets held by Connecticut Warblers, particularly their migrations and non-breeding locations, are slowly being revealed. Armed with this new understanding, researchers and conservationists can begin to identify the robust conservation measures needed for protecting this long-distance migrant, which is unfortunately experiencing steep population declines.

Researchers tracked Connecticut Warblers from four locations across their breeding grounds in Canada and the northern United States to non-breeding grounds in South America. Their study, published April 2021 in the Proceedings of the Royal Society explored the correlation between changes in forest used by Connecticut Warblers and the observed population decline of this species. To do so, the publication’s authors, led by Michael Hallworth, PhD, of the Smithsonian Migratory Bird Center, integrated and analyzed several distinct types of data, including long-term community science data from Breeding Bird Surveys, tracking data from archival light-level geolocators, and remote sensing data of habitats used by Connecticut Warblers throughout the year.

Findings from Hallworth’s study demonstrate the importance of the Boreal Forest, particularly its intactness, for Connecticut Warblers. In the publication, the authors identify habitat loss and fragmentation of the Boreal Forest breeding grounds as a contributing factor to the steep population declines of Connecticut Warbler. Furthermore, they also found that more Connecticut Warblers occur in areas with intact Boreal Forest patches. Adding clarity to their findings, Hallworth states, “Our findings suggest that forest management strategies that encourage large swaths of intact boreal forest may help abate ongoing population declines. However, many questions about their basic ecology still remain, and maintaining large, intact forest patches within the Boreal Forest is only one piece of the conservation puzzle.”

Further reflecting on the study, Hallworth continues, “Our approach allowed us to assess the relative importance of forest change occurring at critical phases of the warbler’s full annual cycle, such as on the breeding grounds, at migratory stopover sites, and their wintering locations in South America. We found that habitat alteration and the resulting fragmentation within the Boreal Forest are more strongly correlated with population declines than forest alteration occurring elsewhere.”

While much of the Boreal Forest biome remains one of the most extensively intact and largely inaccessible forests on Earth, the southern portion of the Connecticut Warbler breeding range is one of   the most impacted and threatened areas of the Boreal. In fact, heavy industrial impacts to the southern Boreal are also why the Boreal Woodland Caribou is now federally threatened in Canada.

Today, only a small percentage of the Boreal Forest breeding range of Connecticut Warbler is currently protected; most of its range remains open to forestry and Fortunately, some of the largest land conservation proposals in history are now being led by Indigenous governments across the Boreal Forest region of Canada. Already, millions of acres of southern Boreal Forest habitat have received protection through the efforts of four First Nations as part of the Pimachiowin Aki World Heritage Site in eastern Manitoba and western Ontario. Millions of additional acres within the range of Connecticut Warbler are in various stages of proposed protected status through the leadership of Indigenous governments and communities. Audubon’s Boreal Conservation program is working to be a strong ally and supporter of these Indigenous-led efforts so that Connecticut Warblers and other Boreal birds will continue to have safe and healthy areas to breed across the Boreal Forest. Proposals for new Indigenous Protected Areas and Indigenous Guardians programs to steward them are the greatest hope for ensuring the large tracts of Boreal Forest breeding habitat that Connecticut Warblers need will be there in the future. Continued funding from the Canadian federal government and other funders to support these Indigenous conservation and stewardship efforts will be essential.

boreal breeding grounds, across to the eastern seaboard where they stopover for approximately 10 days before departing over the Atlantic to reach South America where they winter.” Hallworth also notes an interesting pattern to their data from tracked individuals, “Interestingly, almost all of the tracked birds wintered in the Gran Chaco region of South America.”

Connecticut Warblers, like all our neotropical migrants, cross many geopolitical boundaries, spend most of their time away from the breeding grounds, and face many conservation challenges throughout any given year. Hallworth is sure to note these circumstances, “As long-distance migrants, they face many of the same challenges as other migrants such as artificial light and window strikes for example.”

He also goes on to relay that the wintering grounds the tracked individuals call home also faces a litany of issues. “The Gran Chaco ecoregion has long been a global deforestation hotspot and is also being impacted by wildfire. The continued forest loss, habitat conversion into agriculture, and wildlife within the Gran Chaco ecoregion are potential threats for Connecticut Warblers across their entire breeding range.” For Hallworth, this is an important point to convey for those who wish to see this magnificent warbler on the breeding grounds or in migration. “Although South America may seem quite far away, habitat loss, agricultural practices, and climate-induced wildfires occurring there may also contribute to fewer Connecticut Warblers breeding across the Boreal Forest next spring.”

“This study illustrates how researchers can use tracking data to develop a better understanding of the places migratory birds use throughout the year,” explains Nat Seavy, PhD, director of migration science for Audubon’s Migratory Bird Initiative. “By using this information, we can develop conservation strategies that address the needs of migratory birds across their full annual cycle.”

Ultimately, Connecticut Warblers are just one of the hundreds of migratory bird species tagged and tracked by migration researchers all across the hemisphere. These data provide conservationists with a better understanding of when and where migratory birds most need protection across their full annual cycle. Learn more about Audubon’s Migratory Bird Initiative here.