Take a Trip to the ‘Eighth Continent’ 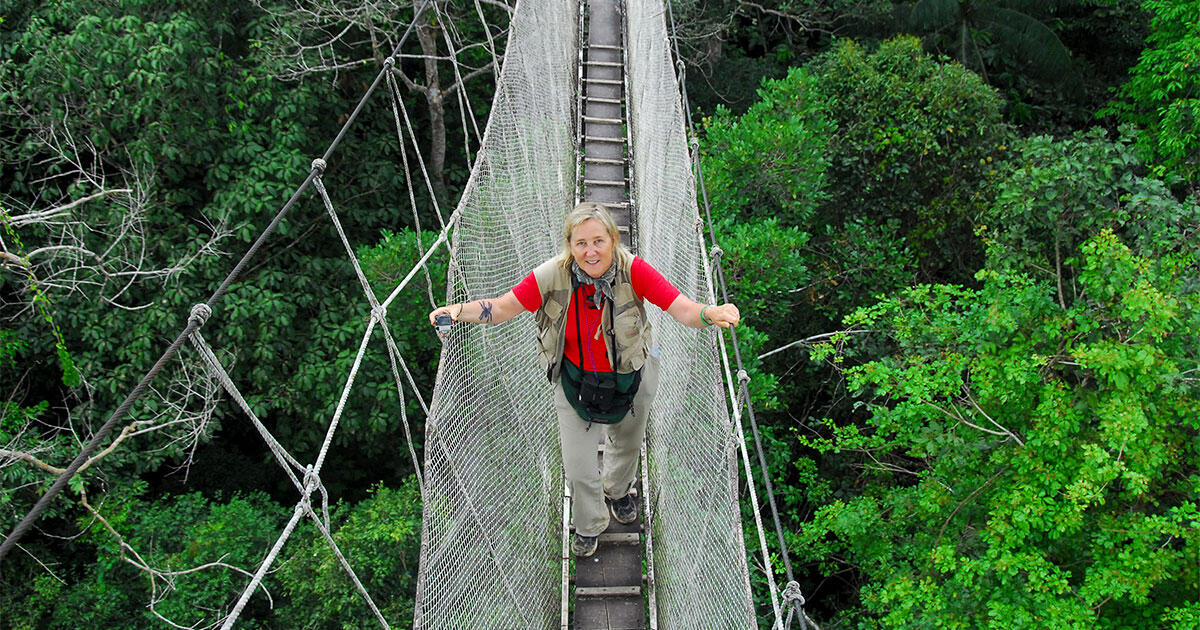 In the late 1970s, as a Ph.D. researcher in Australia, Meg Lowman took a step that would define her career and the future of forest research—she used a slingshot to launch a rope into the tree canopy. With borrowed caving gear, she ascended and entered a vibrant treetop world, bustling with wildlife and holding scientific information that had been ignored for centuries by tree researchers who made observations only from the ground. She and a handful of others invented a new word: “arbornaut,” an explorer of the tree canopy.

Before that, virtually no scientist had studied the treetops, though Lowman later learned a researcher in Costa Rica developed a similar tree-climbing technique in the same year she did. Now 67, Lowman’s science career spans decades, from her start as a botany-obsessed fifth-grader in upstate New York, to her research in forests in Scotland, Australia, Malaysia, India, Ethiopia, and the Amazon. She examined when leaves emerged and how that related to factors like elevation and sunlight, and she led citizen scientists in counting canopy-dwelling species to monitor treetop biodiversity. Her insights on herbivorous insects provide a threshold for how much leaf loss trees can withstand, as climate change brings more insect outbreaks. As executive director of the nonprofit TREE Foundation, Lowman builds canopy walkways in vulnerable rainforests around the world through a project called Mission Green, shaping economies based on eco-tourism rather than deforestation.

The Arbornaut: A Life Discovering the Eighth Continent in the Trees Above Us, published August 10, is Lowman’s most recent memoir. In it, she tells her story with remarkable detail, highlighting her research methods and discoveries as well as the adversity she faced as a woman in the sciences and a single mother. A devotee to increasing diversity in field research, Lowman hopes to inspire young people, especially girls, to follow in her footsteps. Lowman pioneered canopy research and taught others how to reach the treetops. At a canopy conference she hosted in 1994, there were about 200 participants. At the 2008 conference, there were more than 500. But to find all the undiscovered treetop species, it will require two or three times as many climbers, she says.

Audubon recently caught up with Lowman to discuss The Arbornaut, conservation, and birding in an elevated world so fascinating and diverse that Lowman calls it the “eighth continent.”

Audubon: What is it like to be in the tree canopy?

Lowman: It's surround-sound birdsong. Feathers. Colors. Birds are feeding on insects; they're feeding on flowers. It's just an amazing cacophony, and it's gorgeous. The insects are little jewels of color. You could focus on the orchids, or the air plants, or the foliage.

I feel it's akin to being in Times Square if you grew up in rural upstate New York, like I did. You move to the place where the people and the action are, and you're almost dizzy—in this case, with joy.

A: Throughout all of your travels, you kept a lifelong bird list of species that you saw. What role has birding played in your life?

L: Secretly, I became a botanist because I loved birds. And sometimes when you have a passion for something, you don't want to turn it into numbers and publications. So, I thought to myself, ‘If I study where birds live and nest, then I can see them all the time, but I'm actually measuring the habitat and not the birds.’

A: What inspired you to write The Arbornaut?

L: I wanted to write a book that might help other women benefit from my own misadventures. I think I spent an unduly amount of time overcoming hurdles, being shy, and not speaking out when I should have, and somebody could perhaps learn from my experiences.

I'm the mother of two wonderful sons, and I feel just as strongly about getting boys in science as I do about getting girls. But there sure weren’t very many girls when I was pursuing my field biology career, so I have a special empathy for trying to help girls get ahead and feel more confident than I ever was.

A: When did you start noticing the effects of climate change in your work?

L: In the ’70s especially, and the early ’80s, I was surrounded by coral reef ecologists [that were also researching in Sydney]. There were some coral bleaching events, forests were getting extraordinary insect outbreaks, and yet we just passed those off as Mother Nature doing her thing.

But when I went to the dry forests in Australia and started tackling a huge problem called Eucalyptus dieback, where millions of trees were dying from extraordinary insect attack and extreme droughts [in the 1980s], we started to realize that these were not just intermittent insect outbreaks. They were the result of some extraordinary changes going on in our climate.

It absolutely changed me from being one of those conventional scientists in the closet that focuses on my narrow track, to reaching out and knowing that I had to talk to policymakers. We needed to reach corporate leaders in order to make changes for the health of our planet.

A: Was it difficult to transition into an outspoken advocate for the trees, being an introvert?

L: Absolutely. It was terrible. I used to throw up before I gave a talk in front of a policy group, or even in front of a class sometimes, I was that shy. But surrounded by mayors and bank presidents and corporate leaders—these people knew nothing about trees—it forced me to realize that my information actually was important. And it could help them change some of their policies.

A: How do your canopy walks help to promote ecotourism over deforestation?

L: In Mission Green, we've identified at least 10 forests that are highly endangered but highly diverse. And if we don't act soon, they'll be gone. So we're trying to build canopy walkways in those forests for the sole purpose that the walkway will attract ecotourists. Those activities will cause the local people to become guides, educators, chefs, owners of eco-tourist lodges, boat operators. All of the things associated with tourism can provide sustainable income to those local people.

We can't expect to have these forests put under glass and be useless to the people that live there. We need people that can afford to travel, such as Americans and Europeans, to visit these walkway sites and give these folks a good income in the process, which in turn convinces them not to be tempted to log their forests for very short-term dollars.

A: How can people deal with climate anxiety over things like the recent IPCC report, wildfires, and deforestation?

L: One adult to another, it's totally depressing. But as an adult who speaks to children all the time, we need to have a voice for some hope. And there is some hope. Keeping trees is a fantastic way to ameliorate climate change. Convincing adults that their actions count is really important. I have been the climate change adviser to former governors in Florida, where I live. Twenty years ago, nobody listened. Now, people are starting to listen. It seems like a tall order, but we've had innovative changes before. And I sure hope that human beings can pull this one off.

This interview has been edited for length and clarity.