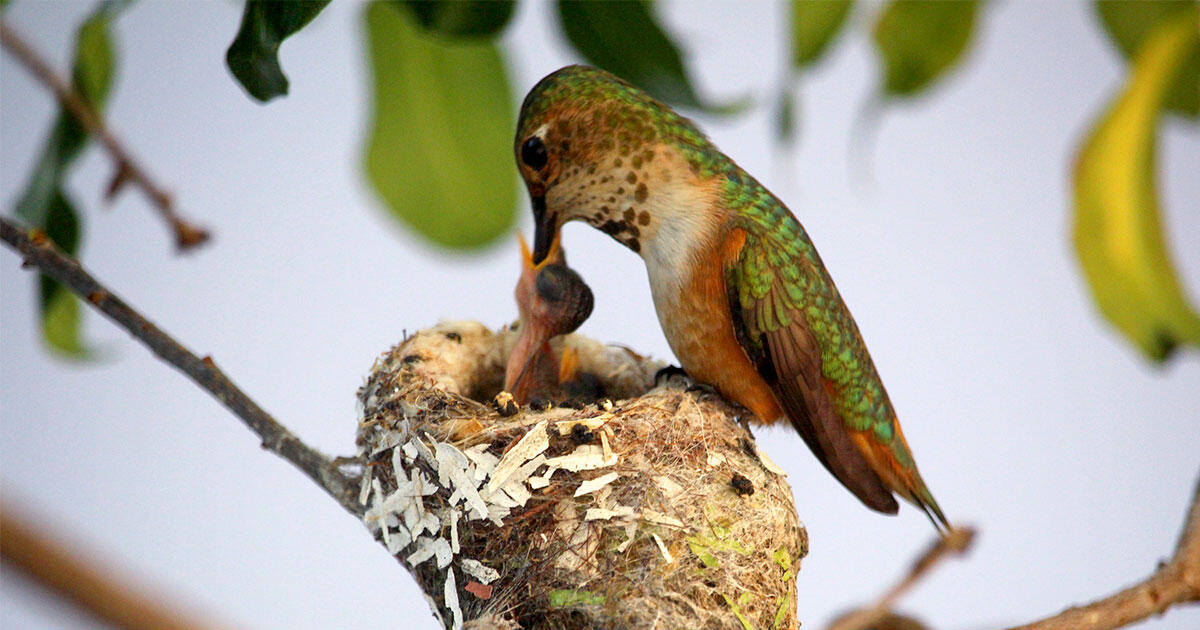 For the past three decades, Sy Montgomery’s passionate prose and intrepid adventures have inspired curiosity about the natural world. Montgomery, a naturalist the Boston Globe dubbed “part Indiana Jones and part Emily Dickinson,” becomes unapologetically invested in the subjects she writes about. She has written more than two dozen books for adults and kids, including the National Book Award finalist The Soul of an Octopus, and the New York Times bestselling The Good Good Pig. Montgomery’s latest book, The Hummingbirds’ Gift: Wonder, Beauty and Renewal on Wings, is her foray into the challenges and triumphs of rehabilitating some of the world’s most fragile creatures: baby Allen’s Hummingbirds.

Readers familiar with Montgomery’s work may recognize pieces of the story from her 2010 book Birdology, or from a 2013 Audubon essay in which she described the challenges of helping to raise two orphaned hummingbird chicks. The Hummingbirds’ Gift is an even deeper immersion into the perspective she gained from that experience. “The stuff we do in our everyday lives—the urgency of returning the phone call, or the email or the deadline or whatever that is—that stuff matters, and we all do it,” Montgomery told Audubon in a recent interview. “But compared to being able to keep one of these creatures alive . . . everything else just felt like cardboard, and this was life.”

In the short but captivating 100-page book, Montgomery documents the pair’s diligent care for the nestlings under Sherburn-LaBelle’s guidance. Between recounting their successes and challenges, Montgomery weaves an impressive list of hummingbird facts, anecdotes, and observations. For instance, she notes how the qualities that make the birds so vulnerable as infants ultimately give them unrivaled flying ability as adults. “It is the very source of their fragility that gives them their superpowers,” Montgomery says. “Birds are air-filled creatures,” she continues, with porous skeletons and hollow-shafted feathers made to trap and move air.

Hummingbirds are perhaps the most delicate of all birds, with thread-like feet and dazzling bubble-filled feathers. When chicks hatch from navy-bean-size eggs, they are naked, pink, and weigh less than a dime. Female hummingbirds, which lay a single pair of eggs each spring, construct their nest of the fine plant fibers, down, and spider-web silk to expand with the growing birds. The older chick hatches a few days before its younger sibling, and within a few weeks, both will have fledged and be foraging for food on their own.

For its body length, the Anna’s Hummingbird is the fastest bird in the world.

Despite their dainty frames, everything about adult hummingbirds is fast and formidable. Their oversized hearts can beat more than 1,000 times per minute, and their wings rotate in a figure-eight motion more than 60 times a second. For its body length, the Anna’s Hummingbird is the fastest bird in the world, diving at 385 body lengths per second—almost twice the Peregrine Falcon’s 200 body lengths per second. Unique in the avian world, hummingbirds can fly backward, upside down, and hover. But being light and quick comes at a cost.

Hummingbird adults and babies need to eat every 20 to 30 minutes, and missing a meal or two can mean death for young birds. When Montgomery arrived at Sherburn-LaBelle’s home in California and peered through the window of the incubator in the guest bedroom, she saw two fleshy pink blobs barely larger than bumblebees. If the chick got too cold, too hungry, too full, or had a bad case of mites—a pest that hummingbird rehabilitators regularly battle—they could die.

With the help of Sherburn-LaBelle’s expertise, Montgomery fed the Allen’s Hummingbird chicks a protein-rich slurry of mashed fruit flies through a pipet. “I was absolutely horrified that I had to stick into these delicate little creatures mouths a big, long tube that looked like the top of the Empire State Building,” she says. “I was horrified to learn that not only could I make the mistake of not giving them enough food, but if I gave them too much, they would literally pop.” Though she was terrified of hurting the birds, Montgomery knew she would do “absolutely anything to save them.”

The challenges the chicks face seemed to change by the minute. When Sherburn-LaBelle and Montgomery discovered mites covering the tiny birds, they prepared for the worst. The pair was torn—an untreated mite infestation could kill a hummingbird, but so could the stress of the treatment. They decided to treat the birds, and though the larger sibling quickly improved, the younger bird struggled through the traumatic process of applying insecticide powder and water-dunking. Montgomery says she couldn’t help but form an attachment to the two hummingbirds, even knowing their odds of surviving to adulthood were less than half. “You’re being extremely vulnerable if you fall in love with little birds that might die in your hands,” Montgomery says. “As vulnerable as they were, they showed us how vulnerable we were.”

As the birds grew stronger, Sherburn-LaBelle and Montgomery decided to name them—something Sherburn-LaBelle is hesitant to do until she thinks they have a chance at making it to the wild. They named the smaller chick Zuni and the larger one Maya. Zuni’s continual setbacks, like refusing food after his mite treatments, reminded Montgomery and Sherburn-LaBelle of the overwhelming obstacles the birds faced. Even if they made it to adulthood, they would be entering a world with vanishing habitat, a changing climate, and a whole host of unnatural threats.

Within a few weeks, the birds did grow strong enough to be released, and their lives were out of Montgomery and Sherburn-LaBelle’s hands. Though she and Sherburn-LaBelle were the chicks’ caretakers, Montgomery felt the hummingbirds had given them something valuable in return. “These little miracles that are all around us can remind us that we can put this world back together,” she says. “The gift they gave us was showing us that we can take a hand in resurrection.”