Settling Scores at a Fist-Fighting Festival in the Peruvian Andes 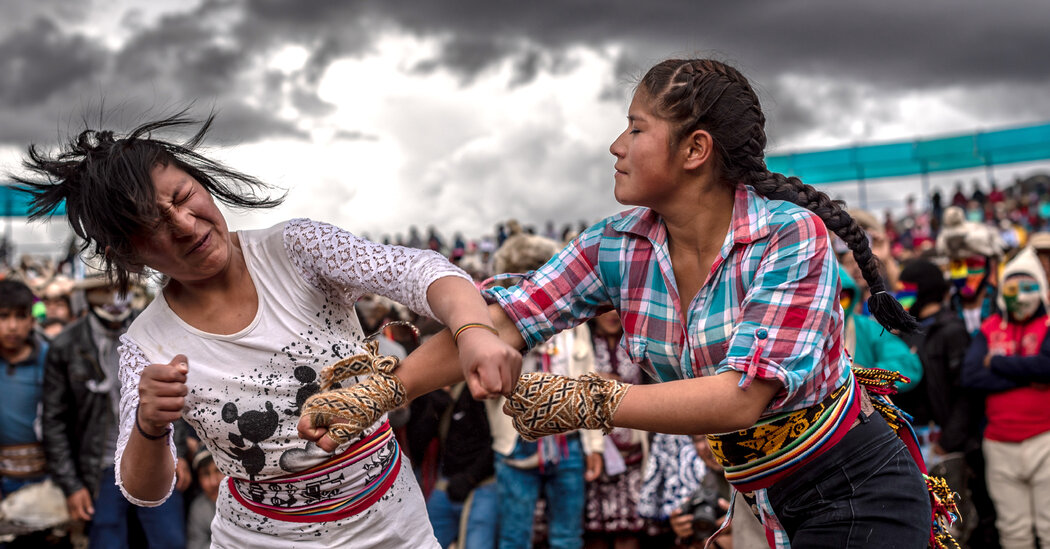 A light rain fell as I fought through a sea of masked fighters for a glimpse into the center ring. From a few feet away, I watched as two local fighters struck at each other with their bare fists.

Thousands of spectators stood in the stadium bleachers surrounding the fighting pit, their eyes following every move. Cheers erupted when one of the fighters was struck down in one clean blow. Bleeding from his lip, the winner threw his fists in the air celebrating victory before embracing his opponent in a hug.

It was Christmas Day, and high in the Peruvian Andes, the annual Andean fighting festival known as the Takanakuy was underway.

The crowd grew still as a new contender stepped into the ring: Yani Lopez, a woman from the town of Santo Tomás. Unlike her male peers, who donned masks and intimidating costumes, Yani wore an elegant red dress embroidered with flowers.

She had stepped up to challenge a friend, Vicentina Yallercco.

Takanakuy — the word means “to hit each other” in Quechua, the Indigenous language spoken in the Peruvian Andes — is a tradition specific to Peru’s remote Chumbivilcas Province. Small rural communities high in the Andes, many of which do not have regular access to law enforcement to resolve disputes, settle their scores once a year in a public arena, with their fists.

The ultimate aim is to begin the new year in peace. For this reason, every fight — whether it involves men, women or children — begins and ends with a hug.

As others joined from their houses, the crowd paraded to the town’s fighting stadium, where thousands of other participants and spectators — drawn from nearby villages — were waiting for the fights to commence.

Looking down from the stadium, spectators drank and ate while cheering the top fighters from their region. A number of men, emboldened by alcohol, formed their own individual fighting circles. While some participants were out to resolve actual grievances, others seemed to be fighting purely for the sport.

The festivities continued for a second day in the nearby village of Llique, where the fights took place on large grassy plains.

I first heard about Takanakuy from Jero Gonzales, a Peruvian photographer with a passion for capturing Indigenous Andean culture. We met on Christmas Eve at a small bus station in the city of Cusco, squeezed into a packed minibus and, for six hours, wove our way through an endless series of towering green mountains, all the while trading our phones back and forth to chat through Google Translate.

Some traditionalists disapprove of female participation in Takanakuy. In recent years, though, an increasing number of women in Chumbivilcas are defying convention and stepping up to fight in front of their community.

For so many women to enter the ring — “it is something new,” Jero told me. But most people understand that women have every right to participate, he added.

Yani and Vicentina are among them. After wrapping their wrists and shaking hands, the women were off twirling around the ring, trading punches and occasional kicks.

Vicentina gave in first, and referees immediately jumped in between the women to conclude the fight.

Like all the other participants, they, too, ended with an embrace — and with their grievances resolved. They were ready to start the new year with a clean slate.

Mike Kai Chen is a documentary photographer based in San Francisco. You can follow his work on Instagram.