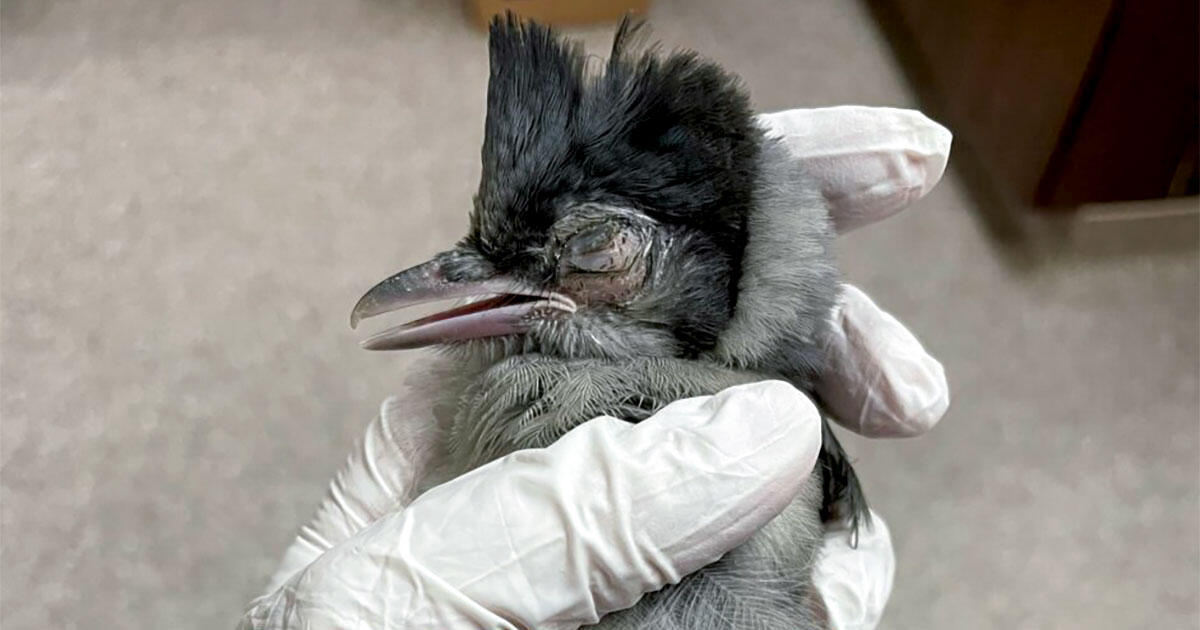 The week before, an alarmed wildlife researcher had reached out to her. “They started noticing an increased number of these birds coming in with crusty eyes,” says Casey, a wildlife veterinarian with the Kentucky Department of Fish and Wildlife Resources. Despite the rehabber’s best efforts, the sick birds kept dying. Even more worrisome, they all fit a similar demographic: mostly young Blue Jays, Common Grackles, European Starlings, and American Robins. It was a distressing pattern, and one that Casey recognized.

For two months, a mysterious bird disease had been rippling across parts of the Mid-Atlantic and Southeastern United States. Now, it had apparently reared its head in Kentucky. Casey quickly asked for samples to ship to the Southeastern Cooperative Wildlife Disease Study (SCWDS) in Athens, Georgia.

In April, scores of birds in the greater Washington, D.C., area began displaying strange symptoms. Their eyes were swollen and crusty; some became disoriented, started twitching, and died. “They were having a hard time seeing,” says Nicole Nemeth of the SCWDS. “Sometimes they don’t seem to be able to use their hind legs.”

By the end of May, similar reports were rolling in from across Maryland, West Virginia and Virginia. By June, the disease had spread to Delaware, New Jersey, Ohio, Tennessee, Florida, Indiana, and Pennsylvania. To date, thousands of sick and dying birds have been reported to SCWDS and other wildlife disease centers in nearby states. Casey’s department alone has gotten more than 1,200 calls since that first sample.

Although SCWDS is one of several state and federal agencies, including the United States Geological Survey’s National Wildlife Health Center (NWHC), currently working together to diagnose the mysterious ailment, none of the labs have been able to identify the cause of the birds’ deaths so far. But on July 2, they released a report that put them a bit closer.

Casey’s Kentucky bird carcasses were among the scores of birds from across the region that SCWDS ran diagnostics on. “We do post-mortem investigations, basically,” Nemeth says. The dead birds underwent a barrage of tests designed to detect everything from bacteria to fungal toxins to sexually transmitted infections.

After more than a month of rigorous, nationwide testing, the NWHC and its collaborators published their report ruling out several common bird pathogens. The coalition was able to strike West Nile virus and avian influenza from the list of possible causes—good news, as both viruses occasionally infect humans. They also ruled out Newcastle disease, herpesviruses, poxviruses, salmonella, chlamydia, and trichomonas parasites.

While it’s extremely helpful to narrow down the list of potential pathogens, investigators are still searching for leads as to the cause of the illness. In the absence of hard data, there has been a lot of speculation.

With such a broad spectrum of bacteria, fungi, toxins, and viruses to test for, it may be a while before researchers have a definitive answer.

Some ecologists have speculated that since birds eat a lot of cicadas, it is possible that they also ingest the occasional mouthful of zombie fungus or get spores in their eyes. While the similar timeline and geographic overlap make this an intriguing theory, so far there is no evidence that the pathogen has any effect on vertebrates.

Other scientists have noted that symptoms appear similar to House Finch eye disease, a type of conjunctivitis caused by the bacterium Mycoplasma gallisepticum. House Finch eye disease also originated on the East Coast and spread across the United States in the mid-1990s. Infected finches develop swollen, runny eyelids, which sometimes leads to total blindness, leaving them vulnerable to predators or starvation. However, the finches don’t develop the tell-tale neurological symptoms that many of the sick songbirds exhibit—which makes M. gallisepticum an unlikely culprit.

With such a broad spectrum of bacteria, fungi, toxins, and viruses to test for, it may be a while before researchers have a definitive answer. Nemeth says it’s even possible that the disease could be caused by multiple pathogens. “There’s really still a lot of possibilities,” she says. “Unfortunately, it just takes time.”

Until then, concerned citizens in affected regions can take steps to protect birds in their own backyards. “The best thing we can recommend is taking down your bird feeders,” Casey says. Once down, it’s important to clean your feeders with a 10 percent bleach solution to kill lingering pathogens.

When birds congregate in one place, it increases their chances of spreading disease. This is especially pertinent given the makeup of affected species. “The birds that have been seeing the symptoms are birds that tend to come to feeders,” says David Curson, director of bird conservation at Audubon Mid-Atlantic.

The NWHC, in partnership with state regulatory agencies, has issued a call for feeder removal in several Kentucky, Maryland, Virginia, West Virginia, and Pennsylvania counties. And it seems to be helping; reports of sick birds have dropped over the last few weeks, according to Casey. As long as that trend continues, “we don’t think this is going to potentially have long-lasting population level effects,” she says.