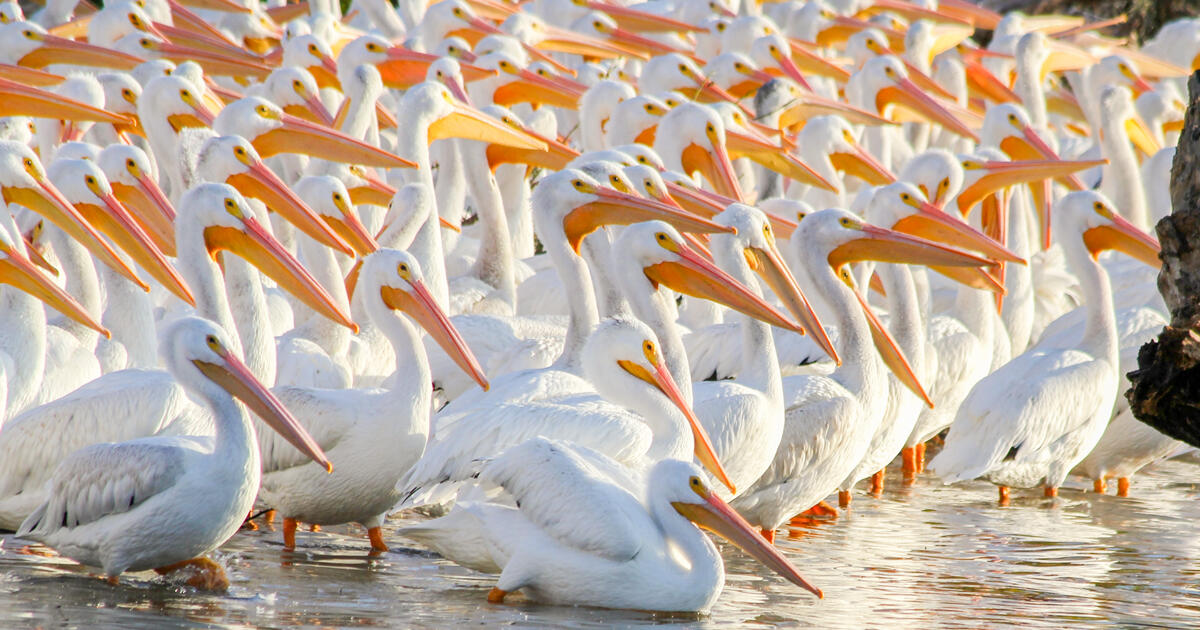 A recently published science paper focused on bird counts and water conditions at Bear River Bay, in the northeastern reach of Great Salt Lake, brings new emphasis to the importance of surface water flows for birds and their habitats. Audubon partnered with the Great Salt Lake Ecosystem Program (GSLEP) to analyze bird trends in the region and link the timing and quantity of water to better understand their habitat needs. This study was just published in the Journal of Field Ornithology and is publicly available.

The analysis shows that low water flows into Bear River Bay during July through September resulted in decreased bird numbers, consistent with a lack of food or other water-related habitat features at an important time for fall migration.

As a prominent feature of Great Salt Lake’s designation as a Western Hemisphere Shorebird Reserve Network site, Bear River Bay is essential to the hemispheric conservation of bird populations and is designated as a Globally Important Bird Area. Among other habitats, the area includes Bear River Migratory Bird Refuge, Willard Spur Wildlife Management Area, private duck clubs, and a large open area of the bay to the west of the refuge.

The birds that depend on Bear River Bay are among Great Salt Lake’s most iconic species, including breeding American White Pelicans and American Avocets and migrating Marbled Godwits and Wilson’s Phalaropes. Safeguarding the Bay’s ability to support these bird species is integral to securing the future for birds at Great Salt Lake.

The wetland birds that depend on Bear River Bay and other habitats at Great Salt Lake have physical features, physiologies, and behaviors shaped by water conditions. For example, some species, such as the American White Pelican, nest on islands that can be connected to the mainland by declining water levels, and these connections can expose nesting birds to predators and disturbances that reduce their success. The ability of birds to survive, reproduce, and thrive at Bear River Bay and Great Salt Lake depends on having enough water in the right locations and right times throughout the year.

Like other saline lakes across the globe, human consumptive water use and climate change have negatively affected and will continue to threaten water supplies needed to maintain Great Salt Lake and its associated wetlands for birds and for other services, such as the mineral extraction and brine shrimp industries. The water flows to Great Salt Lake are critically important, and efforts are underway to identify, evaluate, and implement studies, programs, and policies to maintain flows to the lake. Examining relationships between flows and bird species can further inform efforts to maintain flows to Bear River Bay and Great Salt Lake.

Established with the purpose to manage and conserve the bird and aquatic communities of Great Salt Lake, GSLEP has conducted monitoring of migratory shorebirds, waterfowl, and other waterbirds at specific locations within the lake since 1997. GSLEP has surveyed Bear River Bay using consistent methods since 2004. When combined with data from long-term water resource monitoring programs from the U.S. Geological Survey, sewage treatment facilities, and water conservancy districts, GSLEP’s data can be used to examine the effects of water resource conditions on bird counts in Bear River Bay.

Regionally, assessments indicate that surface water resources are declining, so maintaining sufficient water resources at Bear River Bay and other locally and regionally important sites is key to allowing wetland birds to thrive in the future. Coordinated monitoring of birds and habitats across the region will be required to evaluate the effect of regional conditions on bird use, and for this reason, Audubon has been advocating for passage of recently introduced federal legislation to conduct a regional, scientific assessment of saline lakes.

Audubon will continue working with collaborators, including GSLEP, to assess relationships between birds and water resources at Bear River Bay, Great Salt, and across the region. It is only through coordinated, local and regional water resource conservation and management that Bear River Bay and the network of saline lakes and their associated wetlands will continue to provide critical habitat for wetland birds.