Rare Photos Reveal the Secretive Life of the Banded Ground-Cuckoo 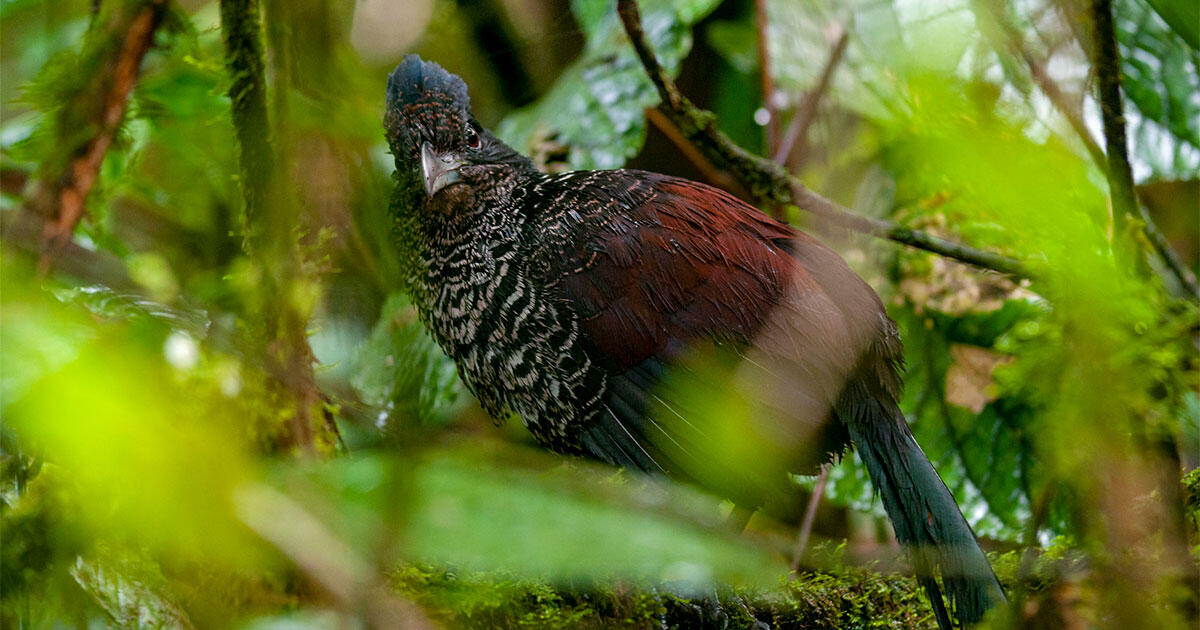 In the damp foothills of South America’s Chocó rainforest lurks a speedy, ground-dwelling bird that only a handful of dedicated people have ever seen. Even fewer have successfully photographed the Banded Ground-Cuckoo, but that’s exactly what Murray Cooper aimed to do. “You can hear it, but to see it used to be an impossibility, almost,” says Cooper, a wildlife photographer based in Ecuador.

Despite their relatively large stature—similar to the Greater Roadrunner—the Banded Ground-Cuckoo slips through the dense forest floor undetected. Their black, chestnut, and white plumage conceals them against the dark forest floor, and long legs help them chase down food. The birds’ clever main feeding strategy involves following swarms of army ants, munching on the insects and grubs that the ants disturb as they sweep the forest floor. “It’s got this huge beak, and it’s got these gnarly legs, and it’s just quite incredible for a ground bird,” Cooper says.

The Banded Ground-Cuckoo is one of five species of ground cuckoos, all of which are elusive denizens of South America’s humid forests, some of the most biodiverse and threatened ecosystems in the world. Deforestation has forced many of the Chocó’s sensitive species like the Banded Ground-Cuckoo to survive in scraps of forest bound by agriculture and human development. Today, fewer than 2,000 of these cuckoos are left, and their population is still falling.

Cooper knew that capturing a photo of a Banded Ground-Cuckoo in the wild would accelerate conservation efforts for the species, and in 2008 he partnered with Jordan Karubian, a tropical ecologist at Tulane University who studies the birds. For one month of the year, Cooper visited the Mache-Chindul Reserve, a section of the Chocó rainforest on the Ecuadorian coast where about 100 of the cuckoos remain. On their first expedition together, Karubian and Cooper spent five days searching, hiding, and waiting, until they finally saw one. “It was a huge moment” when they spotted the bird, Cooper says. Apart from the many technical photography challenges running through his mind, like the low light and dense foliage, Cooper says, “I was just going apeshit.”

To increase his chances of seeing the shy cuckoo and minimize his intrusion into its habitat, Cooper camouflaged himself in a bird hide in the early hours and waited through nightfall. He often heard the bird’s characteristic bill snapping and low, guttural calls. “Its mooing sound is very ventriloquial,” Cooper says. “One time I was hearing it and I was still relaxed—I thought it was further away. The next minute, it’s right at my feet.”

Some years, they failed to spot the bird altogether. Karubian’s research, which involves tracking a few cuckoos with small radio trackers to learn more about their movement and home range, helped Cooper narrow his quest, and in 2014, it led to a new discovery. “We just noticed that for several days the signal was coming from a very restricted area, and that made us suspicious,” Karubian says. He wondered why the bird wasn’t moving around as much as the others they were observing. When they investigated the area, they discovered a Banded Ground-Cuckoo nest—the first-ever recorded by scientists.

Finding a nest gave Karubian the chance to witness new behaviors and gave Cooper a chance to capture images of a parent feeding its chick. The flightless birds had been using a fallen branch as a ramp to access the nest, which was more than 10 feet off of the ground. Cooper recalls the pair passed a frog back and forth, as the parent tried to squash the meal into a more manageable size for the small fledgling.

The large sections of forest that are needed to support the Banded Ground-Cuckoo and species they rely on are increasingly rare. Army ants need big, healthy stretches of habitat to survive, and the Banded Ground-Cuckoos’ depend on them as a major food source. Over 60 percent of the Ecuadorian Chocó has already been lost to logging, mining, and crops like palm oil, but local organizations like Fundación para la Conservación de los Andes Tropicales, which Karubian helped found, are partnering with and training residents as conservationists and researchers. He hopes images of the rare animals that the forests hold will inspire people to advocate for these often-invisible species. After more than a decade of chasing the Banded Ground-Cuckoo, Cooper feels like he’s finally accomplished his mission.

While the mysterious nature of the Banded Ground-Cuckoo makes them “a holy grail of neotropical birding,” says Karubian, it also makes them both challenging and rewarding to work with. “They can be very cryptic,” he says, but whenever the bird reveals itself, “it feels like a gift.”