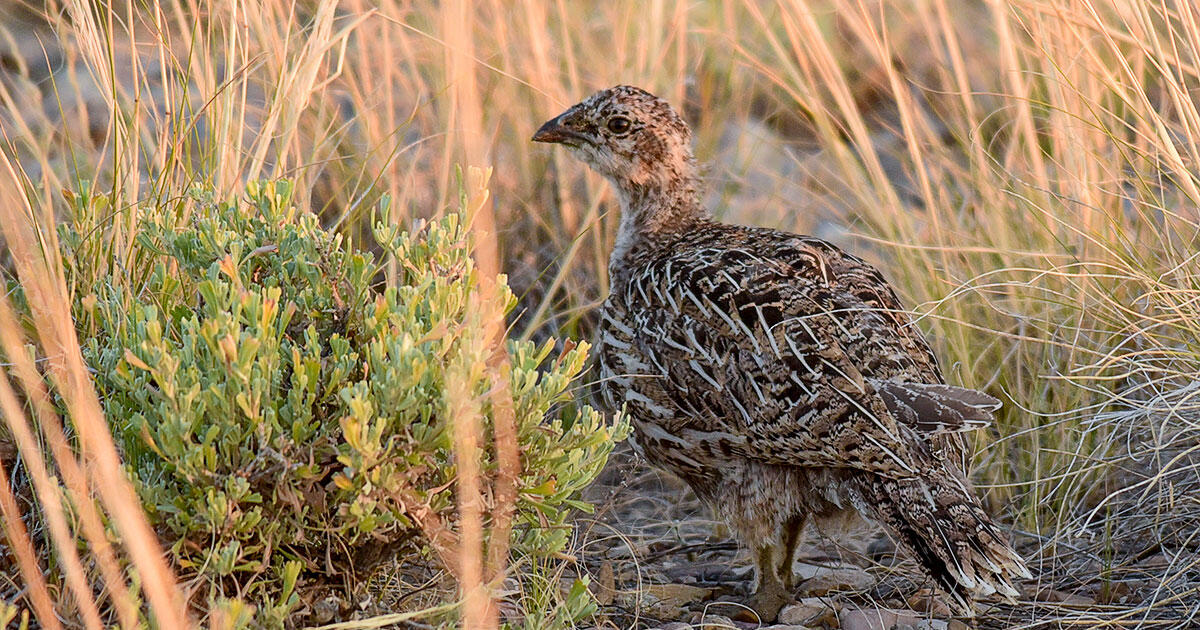 Grasshoppers belong on the grasslands of the West, and in most years they’re harmless—even beneficial. In fact, they’re a key food for other insects, birds, small mammals, and spiders. But grasshopper numbers famously fluctuate, and in years of peak abundance they can cause significant economic damage. This is one of those years.

This summer, across the western U.S., clouds of grasshoppers are devouring crops, trees, and public rangelands where ranchers graze their cows. The infestation is “a scourge of the Earth,” Oregon rancher Roger Nicholson told The Guardian. In some regions, grasshopper totals climbed to 15 or more per square yard, including massive swaths of Montana and Oregon, according to a map from the U.S. Department of Agriculture (USDA). It only takes eight grasshoppers per square yard for the government to consider using chemicals to control the situation.

To combat the outbreak, the Animal and Plant Health Inspection Service (APHIS), part of the USDA, is using aircraft to spray a pesticide called diflubenzuron at low volumes. According to contracting documents, APHIS planned to spray more than 1.5 million acres this year for grasshoppers and their relatives, Mormon crickets, which have similar effects on vegetation. The plan calls for alternating strips of treated and untreated ground totaling more than 3 million acres, mostly in Montana but also in Arizona, Idaho, Nevada, Oregon, Utah, and Wyoming. As of July 26, the agency treated about 805,000 acres. That places this year among the program’s largest spraying endeavors since the 1980s.

But environmentalists worry that this effort to protect farmers and ranchers comes at the cost of harming wildlife. Grassland birds are among the most imperiled in North America, and this pesticide campaign targets some of the food sources they rely on. Beyond that, the chemical may kill other insects. Conservationists fear that harm to birds and predatory insects would not only affect the wider ecosystem, but it might also contribute to future outbreaks, as these creatures prey on grasshoppers.

Several western states are dealing with the second-largest grasshopper outbreak that the U.S. has seen in 35 years. https://t.co/cJM49iiI8V pic.twitter.com/ixs49UsoaS

Diflubenzuron works by preventing insects from molting, killing them in their developing stages. While the pesticide is meant to kill grasshoppers, researchers have studied whether it will harm other, non-target insects as well, with mixed results. Generally, studies have found diflubenzuron to have a low environmental impact, according to APHIS’s 2019 risk assessment for the pesticide. In many cases, it caused minimal harm to non-target insects. But to environmentalists, certain studies raise red flags. Some studied locations have shown lower populations of beetles, spiders, ants, or flies after pesticide application. And other studies that showed quick recovery of non-target insect populations were done on a much smaller scale than APHIS’s pesticide use.

“Everyone hopes, and APHIS sort of seems to insinuate, that the spray will just kill grasshoppers, but it doesn’t actually work that way, unfortunately,” says Sharon Selvaggio, pesticide program specialist with The Xerces Society for Invertebrate Conservation. “We really can’t afford to cause harm to those [other] groups of insects. They are partly what keeps ecosystems in balance.”

Selvaggio and other environmentalists say that by killing large numbers of grasshoppers—as well as potentially killing other kinds of insects—spraying this pesticide could have cascading effects across the food chain. In particular, they worry about Greater Sage-Grouse, whose numbers have plummeted from the millions to a few hundred thousand—an 80 percent decline since 1965. Although adult sage-grouse subsist entirely on sagebrush leaves in winter, they do eat grasshoppers and other insects in warmer months. Insects are even more important for sage-grouse chicks, which don’t drink much water outside their food, says Brian Rutledge, recently retired director of Audubon’s sagebrush ecosystem initiative. “It’s a huge concern,” he says. “Crickets and grasshoppers are a huge part of the protein—and not just the protein, but fluid—for grouse chicks.”

Jocelyn Leroux, Washington and Montana director for the Western Watersheds Project, agrees that the widespread use of the pesticide is worrisome for sage-grouse survival. “If you have one year where all these insects are dying and sage-grouse can’t eat, then that can significantly impact the population long-term,” she says.

Similar concerns apply to other grassland birds, 74 percent of which are in decline. Species that also eat grasshoppers and crickets and could be affected by the pesticide treatment include Swainson’s Hawk, Long-Billed Curlew, and Sage Thrasher. According to APHIS’s risk assessment, the threat to insect-eating birds is “minimal,” based on available data. But given the importance of insects to grassland bird species, Leroux and others says more research is needed.

As for direct effects, the risk to birds from touching, breathing in, or consuming diflubenzuron appears to be very low. If a bird ingests the chemical once or over a short term, it would take a massive dose to cause any damage, according to the U.S. Environmental Protection Agency. And with repeated consumption, the risk of harm increases only slightly.

The debate over diflubenzuron is likely far from over. Grasshopper outbreaks tend to occur after multiple years with hot, dry summers and mild winters, which limit the spread of fungi and bacteria that can kill them. With those conditions only expected to become more common in the West as climate change worsens, the issue of controlling grasshopper populations may only increase. So, rather than spraying chemicals each year, conservationists urge a longer-term solution that strengthens the ecosystem’s ability to regulate itself.

Navneet Kaur, extension entomologist at Oregon State University, studies integrated pest management (IPM), an approach that combines different methods to control outbreaks, ranging from changing cultural practices to using chemicals. “Sometimes pesticides are the first line of defense in the IPM program,” she says. But IPM uses multiple strategies for a “holistic, system-level approach,” she says, and an important one is using natural predators, including birds.

Studies have shown that hungry grassland birds can help prevent infestations by eating grasshoppers. During an average year, birds can cut grasshopper numbers by 30 to 50 percent, lessening the chance of a future outbreak. There’s evidence that improving rangeland habitat and vegetation can attract birds and, as a result, help to manage the swarms. Predatory insects like beetles, wasps, and large ants can also keep grasshoppers in check.

“What actually needs to happen is a shift back toward more native ecosystems,” not more pesticide spraying, Leroux says. In the past, with “robust canopy cover and diversity of plant, insect and bird species, there was more natural competition, natural predation of these grasshoppers.” Rotational grazing, or moving cows through different contained pastures, can promote ecosystem health, increase vegetation diversity, and deter outbreaks, Leroux and Selvaggio say.

With APHIS’s program nearly complete for the year, Selvaggio says she’s going to keep working to manage future grasshopper outbreaks more sustainably. “We all want that long-term resilience of the land and the values that flow from it, whether it be cattle forage or biodiversity,” she says. Xerces has tried for three years to open a dialogue with APHIS about how to best manage the rangelands. This year, they started listening, she says. “We are going to stick with this.