On the Move With Mongolia’s Nomadic Reindeer Herders 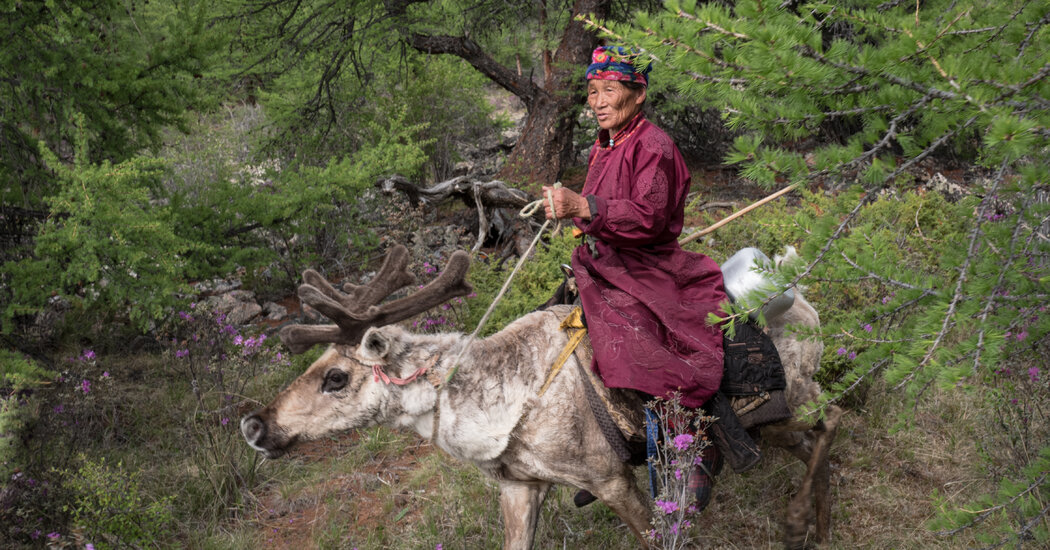 A morning mist filled the valley near Hatgal, a small village at the southern tip of Lake Khovsgol in north central Mongolia. Glancing at the figures between the fragrant pines and larches, I could hardly distinguish the silhouettes of the reindeer from those of their herders.

Darima Delger, 64, and her husband, Uwugdorj Delger, 66, gathered their belongings and dismantled a rusty stove. They tossed a coat over the shoulders of their grandchildren who were already sitting on the backs of their animals. The family’s herd stood as still as if in a Flemish painting. Everyone was waiting to depart.

The sound of colliding tent poles — mixed with a swirl of commanding voices — left little doubt: The transhumance to the herders’ summer camp was underway.

Darima and Uwugdorj’s family is part of a small group of semi-nomadic reindeer herders known as the Dukha or Tsaatan. Only a few hundred remain here in northern Mongolia. Their lives revolve around their domesticated reindeer, which supply them with much of their daily needs, including milk (used in tea, and to make yogurt and cheese), leather and a means of transportation. The animals’ velvety antlers, once removed, are sold for use in medicine and dietary supplements. Very few of the animals are killed for their meat — perhaps one or two a year.

The decision to move the herd was not a simple one. In past years, Uwugdorj explained, they moved the reindeer roughly every month. “In reality, we were following them,” he said with a laugh. “The reindeer are smarter than we are.”

But now the rain and snow cycles are changing, Uwugdorj said. Weather within the taiga, the subarctic forest where the animals thrive, has become less predictable. Lichen, a staple of the reindeer’s diet, is especially vulnerable to changes in climate. Moreover, reindeer populations — adversely affected by disease, historical mismanagement and predation by wolves — have declined.

“If we are wrong, we put the whole herd in danger,” Uwugdorj said, checking the straps of his saddles. Then, jumping onto his reindeer, he kicked off the impatient procession along a strip of thick snow.

On horseback, I could hardly keep up with the herd. Compared to reindeer, horses move like elephants.

Despite his injured knee, Uwugdorj wove between the pines and disappeared from view. With Darima and their daughter, I scanned for the few reindeer weakened by winter. Between efforts, I watched the looks the family exchanged. Their faces seemed to acknowledge the uncertainty. “If we lose our animals,” Darima told me at one point, “we lose everything.”

After arriving to the new pasture in a pouring rain, the group’s tepee-like tents, called ortz, came up with astonishing speed. About 20 families were in the process of migrating.

Darima went out to milk the reindeer. After attaching the animals to stakes for the night, everyone gathered around a crackling fire.

The Dukha are originally from the Tuva region of Russia, to the north. Tuva was for many years an independent country, until it was annexed by the Soviet Union in 1944. As children under Communist rule, Uwugdorj and Darima were sent to boarding schools and endured countless attempts to erase their identity, they said. Uwugdorj remembered escaping from the village at night because it was too hot in the dorms. “We were hungry, we were cold,” he said. In the winters, pieces of reindeer skin were boiled to make a broth that he swallowed to survive. Furs went to wealthy customers in the cities.

With their savings, Uwugdorj and Darima had a house built in the village of Tsagaannuur, to the west of Lake Khovsgol, so that their grandchildren could receive proper schooling.

The next morning, stepping through moss and lichen, I met a woman in her seventies who was milking her six reindeer. She told me about how dramatically life changed for the Dukha when the border to the north was redrawn — families were separated, their seasonal migrations stunted. Many Dukha became refugees in either the Soviet Union or Mongolia. “We wanted to escape, she said, “from the people who forbade us to live in the taiga.”

Every summer, a steady stream of tourists — from places like China, Israel, the United States and New Zealand — pass through the taiga to visit the herders. But not all Dukha families profit from the visitors. Instead, they make a living selling antlers and pelts, collecting pine seeds and receiving small subsidies, though “it is insufficient to raise our family,” said Dawasurun Mangaljav, 28, who spoke with me alongside her husband, Galbadrakh, who is 34.

“Strangers think we are free,” Dawasurun said. In fact, she said, money is a constant problem. During the summer, Dawasurun and Galbadrakh’s children live with them in the taiga. They will return to school each September — but only if the parents can afford it.

On my last day with the Dukha, I went with Uwugdorj to inspect the herd.

Uwugdorj, who once worked as a government-employed hunter, knows the land. The climate, he said, is changing; he can see it. Since the 1940s, the average temperature in Mongolia’s boreal forests has risen nearly four degrees Fahrenheit, more than twice the global average.

“We are not statues in a museum,” Uwugdorj said. “We are like our reindeer: on the move.”

And their fight, he added, is to persevere in a world that seems bent on challenging their way of life.