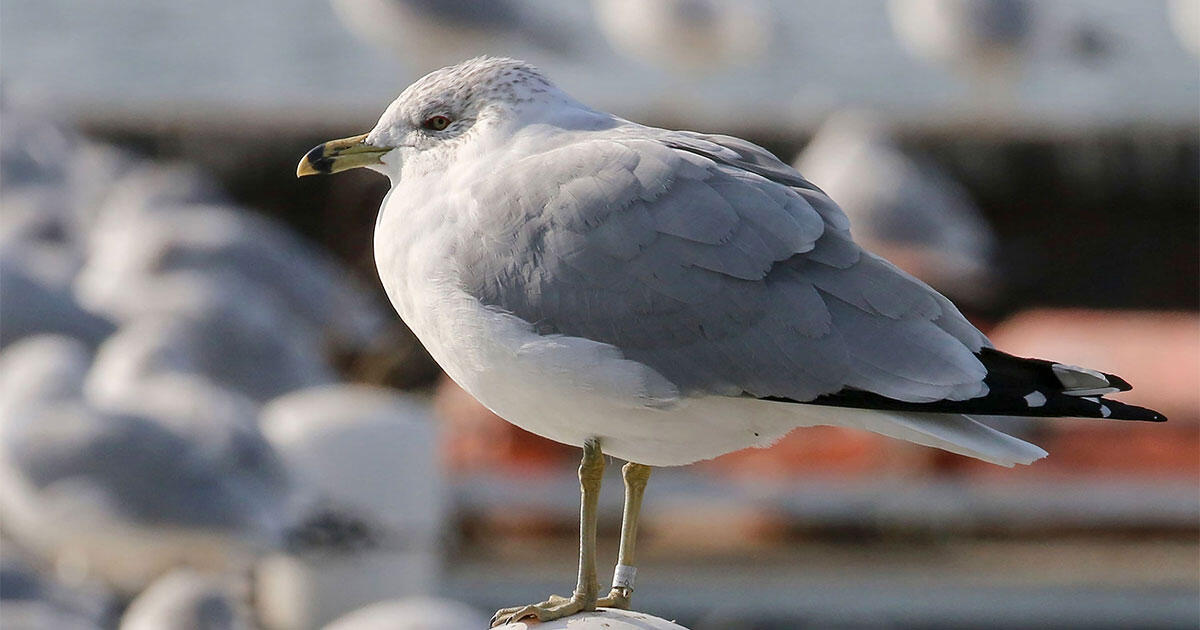 This past winter, Chuck Slusarczyk Jr. braved the frigid wind of Cleveland’s Wendy Park near daily to observe the thousands of gulls that congregate at the mouth of the Cuyahoga River. But on one January day, among the mix of several species, he noticed a Ring-billed Gull with a metal band around its leg. Hoping to learn more about the bird’s history, Slusarczyk returned over the next five days to re-find the gull and snap a clear picture of the band—but the bird always seemed to be facing the wrong way. Ultimately, Slusarczyk managed to capture only part of the band’s identification number before growing ice cover pushed the gulls to open water and beyond the reach of his camera lens.

Unsure whether the partial report would be useful, Slusarczyk sent an email to the United States Geological Survey’s Bird Banding Lab. Someone from the lab eventually got back to him and requested his photos to help with the ID. The lab tracks which numbers each bird bander uses, and they all begin with a three- or four-number prefix followed by a five-number suffix. Slusarczyk had photographed the full suffix, so staff had a good lead. In addition to the number, lab biologists also use clues like the band’s construction and where it is located on the bird to determine origin.

After another round of photo verifications, on March 4, Slusarczyk finally got his answer—and it was a surprise. The USGS biologists had positively identified the gull while also confirming that Slusarczyk had spotted the oldest Ring-billed Gull on record, at 28 years old, beating the previous record by a year.

Even with the missing digits, “it was a slam dunk to figure out which bird this actually was,” says Matt Rogosky, an encounter biologist at the lab who helped solve the gull’s identity.

As it turned out, Slusarczyk’s gull was born in 1992 at Tommy Thompson Park, a spit of coastal habitat jutting out into Lake Ontario near downtown Toronto. At the time, this colony was undergoing a population explosion, and researchers led by Hans Blakpoel at the Canadian Wildlife Service hoped to understand why, as well as where juvenile birds dispersed to after leaving the nest.

Ring-billed Gulls are one of the most familiar gulls in North America due to their prevalence around dumps, parking lots, and beaches, where their bold, french fry-stealing antics have earned them a negative reputation. However, biologists know surprisingly little about the species’ longevity, due in part to a lack of data. Slusarczyk’s find represents an important datapoint toward our understanding of these birds, while highlighting the value of bird banding for understanding species demographics more generally.

Biologists know surprisingly little about the species’ longevity, due in part to a lack of data.

Discovering such an old gull might sound shocking, but there simply aren’t enough long-term demography studies on Ring-billed Gulls to gauge how strange a record like this is, says Dave Moore, senior waterbird biologist at the Canadian Wildlife Service who holds Blakpoel’s role today. Many of these gull-banding studies last only a few years and have targeted purposes, he explains, and returning adults are typically younger than 10 years old. Further complicating things is that many older studies used flimsier aluminum bands that fell off after four or five years, according to Cornell Lab of Ornithology’s Birds of the World.

Resighting live birds away from the colony, especially those with such tiny bands, is also difficult. “These small metal bands are best read in the hand,” says Erin Giese, senior research specialist at University of Wisconsin-Green Bay’s Cofrin Center for Biodiversity. “The fact that [Slusarczyk] was able to resight the band was tremendous on its own.”

Paying attention to small details comes naturally to Slusarczyk—not only is he a birder, but he’s also a guller, arguably birding’s most fastidious faction. Gulls can be especially difficult to identify; species sport a relatively uniform color palette of whites and grays, and individuals may go through a complex sequence of immature plumages before reaching maturity (three years old, in the case of Ring-billed Gulls).

But the hobby also brings its own special pleasures: During the winter, rare or vagrant gull species may mix with large flocks, and only a trained eye can spot the outliers. Still, even the commonest gulls delight die-hard gullers. “They’re adaptable survivors, and sometimes they’re downright funny,” Slusarczyk says.

Apparently they can age gracefully, too. Slusarcyk says this Ring-billed didn’t look any older than the four- and five-year-old banded gulls he’s reported in the past.

As more people pick up birding, bird-banding biologists hope that a rise in band resightings will follow, allowing for scientists to learn more about the movements and lifespan of gulls and other birds than ever before. There’s even a chance these resightings could help change the Ring-billed Gull’s reputation in the general public. “Knowing that something lives that long is really important,” Moore says. “I hope it changes people’s perspective.”

Without any other reports of this bird in the past 28 years, it’s impossible to know anything about its life—what it’s seen or where it’s gone—but banding studies overall show Ring-billed Gulls’ marked fidelities to their breeding colonies. And though the Toronto gulls spread across eastern North America during the winter, they also show a similar loyalty to their wintering locations.

In fact, Slusarczyk took another look at his gull photographs after receiving his certificate from the banding laboratory, and he noticed that he’d photographed the same bird last year. He just didn’t know he could submit a partial band at the time. “It’s been here two winters in a row,” he says. “It was probably here every winter since 1992.”