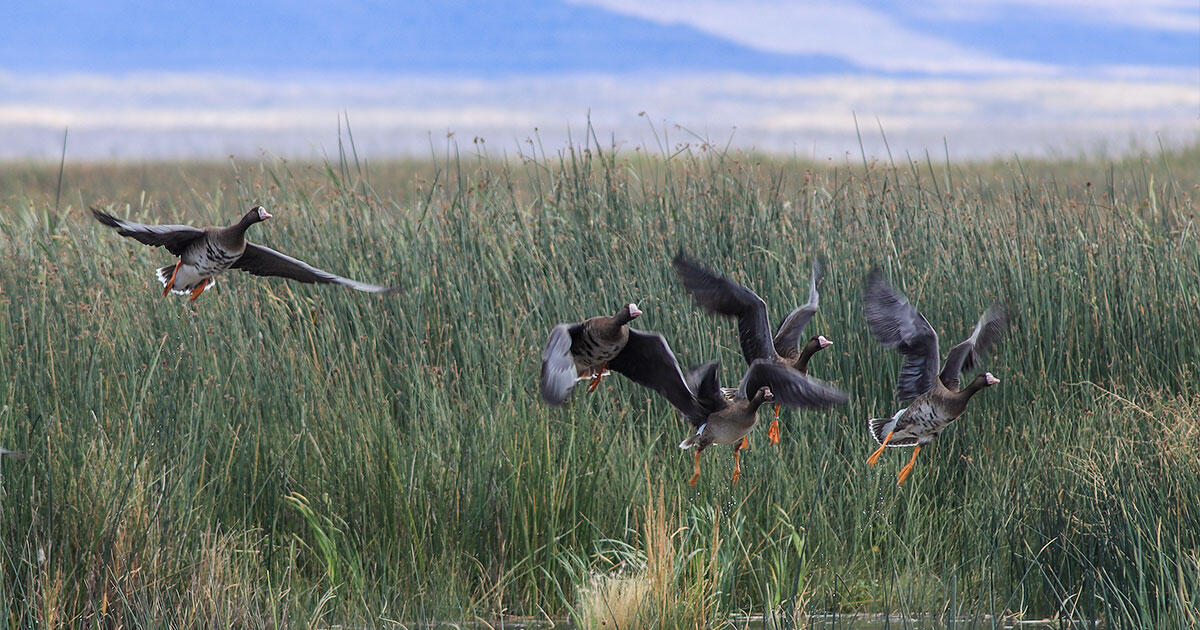 In the middle of last September, Cory Overton started receiving odd texts and instant messages from his colleagues. Their gist was, in his words: “What’s up with that weird goose?”

The “weird goose” was a Tule Goose fitted with a GPS tracker, one of a protected population of Greater White-fronted Geese that nests in Alaska and winters in California marshes. Overton, a U.S. Geological Survey wildlife biologist, and his colleagues were keeping tabs on the bird as part of a waterfowl-tracking project that’s been running since 2015. Because the goose wore a GPS tag, they could follow its location from their computers. Overton took a look: Instead of showing up near its usual stopover site at Summer Lake in central Oregon, the bird was about 300 miles off course in the Idaho Panhandle. “As far as we knew, nobody had ever confirmed the Tule Goose in Idaho before,” Overton recalls. “That’s really far outside of what we would expect.”

The team wondered about the whereabouts of three other Tule Geese previously tagged by USGS in 2018. The GPS data showed they were all also following offbeat migration routes. Overton and his colleagues quickly realized that the unusual flight paths lined up with areas of dense wildfire smoke, produced by what would go on record as one of the worst U.S. fire seasons in history. In September 2020 alone, more than 3.5 million acres caught fire. Smoke from the blazes extended even farther, covering an area more than 44 times that of the fires, according to Overton’s estimate.

Last week, Overton published an analysis of the Tule Geese’s response to wildfire smoke—the first to use GPS-tracking data to show how smoke interferes with bird migration. The new findings, published this month in Ecology, add nuance to the story of last year’s fall migration bird die-off in the Southwest and clarify the risk birds face as wildfires grow worse due to climate change. The wayward geese tried to avoid the smoke, and in the process doubled their migration time and wasted precious energy. Experts say other migratory birds likely face similar, or even worse, consequences.

For the four tagged Tule Geese, things started to go wrong off the coast of Washington’s Olympic Peninsula. That’s where they first encountered high concentrations of smoke, produced by vast wildfires that ended up scorching more than 10 million acres across the West. “These birds hit Washington, and it’s like they just lost their compass,” Overton says.

From there, each of the birds began deviating from the migratory paths they’d followed previously. Early on, three of the birds touched down separately on the Pacific Ocean and floated with the waves for a few days, conserving energy while they waited out the smoke but unable to eat. The fourth goose continued south over land but turned around when it reached the Oregon border in an attempt to escape thickening smoke, Overton suspects. Although birds generally fly just a few hundred feet above the ground, three of the geese climbed to more than 13,000 feet at various points in their journey—unusual behavior that suggests they were trying to rise above columns of smoke. There were additional pauses in farm fields and more turnarounds before the birds finally reached their stopover destination.

“There’s three main options to avoid air pollution,” Overton explains. “Go around it, go over it, and decrease your energetic use. And these birds tried to do all three.” They didn’t always succeed. One goose changed its usual course and crossed to the eastern side of the Cascade Mountains in Oregon to evade smoke. As a result, it ended up flying through some of the densest smoke produced by the fires.

The 2020 trek from Alaska to Summer Lake took the geese an average of about nine days, more than twice as long as it had in 2019. Tule Geese fly in large flocks, so although only four birds were tracked, each likely represents hundreds of flockmates.

Experts agree the geese were probably trying to minimize their smoke exposure. Smoky air harms birds in much the same way it does people, says Olivia Sanderfoot, a University of Washington ecologist who studies smoke impacts on birds. It damages avian airways, impedes breathing, can contribute to infections, and, at high enough levels, leads to carbon monoxide poisoning and death.

They were also probably confused. Birds rely on a combination of sensory cues to wayfind, including sight and smell, Sanderfoot says. Dense smoke could make navigation a challenge.

People living through the devastating 2020 fire season experienced some of the same impacts. Smoke poisoned the air in West Coast cities, forcing people to restrict their movements by locking themselves indoors to avoid breathing it in. At least 43 people died directly in the 2020 fires, and 1,200 to 3,000 additional deaths may have been caused by the smoke, according to one estimate. Smoke pollution makes it harder to breathe, worsens asthma and lung disease, and increases the risk of other health problems, including heart attacks and strokes. Over the long term, poor air quality can even damage your immune system.

The tagged Tule Geese managed to evade the immediate consequences. They survived the 2020 fire season, and subsequent population counts suggest overall Tule Geese numbers weren’t affected. But the birds used much more energy than they would have under normal circumstances, Overton says. Migration is already a difficult and risky undertaking. Birds fly thousands of miles, stopping infrequently. Every bit of lost energy matters. Difficulties like habitat loss, drought, storms, and fires that are individually tolerable can compound to kill birds, says Nat Seavy, director of migration science at the National Audubon Society.

Every bit of lost energy matters.

Tule Geese may have been better able to cope compared with other migratory species. Faced with the same conditions, species unable to execute water landings, such as small songbirds, might have met worse ends.

The mass avian die-off seen during 2020 western fall migration suggests many did. The same month the Tule Geese were waylaid by smoke, thousands of migrating songbirds were found dead in the Southwest—a mysterious and disturbing event also associated with wildfire smoke. According to lab results, birds collected during the die-off succumbed to starvation after an unusual southwestern snowstorm. But many experts suspected wildfires also played a role. Some birds had irritated lungs and many were already in poor shape before the storm, having passed through areas of smoke and drought. Another study that reviewed iNaturalist records submitted by local birders found a connection between reported dead birds and smoky air.

The new Tule Goose study gives support to the idea that wildfire weakened the birds that died in the mass event, Sanderfoot says, which made them susceptible to the winter storm that ultimately killed them. The birds didn’t die from smoke poisoning, but having to navigate through thick, toxic air and around unpredictable columns of smoke while struggling to breathe imposes big energy costs on birds.“The consequence of smoke is a migration that takes twice as long. And that is not something that birds are adapted to do,” Sanderfoot says. “If your migration takes four days, you ate enough food to get there in four days.” She also notes that the subsequent energy deficit could hurt birds in the long term, if it hinders their breeding or later survival.

Perhaps that was even the case for the four Tule Geese monitored in 2020: Of the group, Overton says only two have returned back from Alaska this fall. This could be because of the fires, or it could just be unrelated bad luck.

The episode has Overton fixated on luck. For this study to be possible, many forces aligned by chance: The four geese were already being tracked with years of previous data for comparison, they encountered wildfire smoke in just the right place and time, and the researchers happened to be paying attention. “Fortunate for us,” he says. “Unfortunate for the birds.”