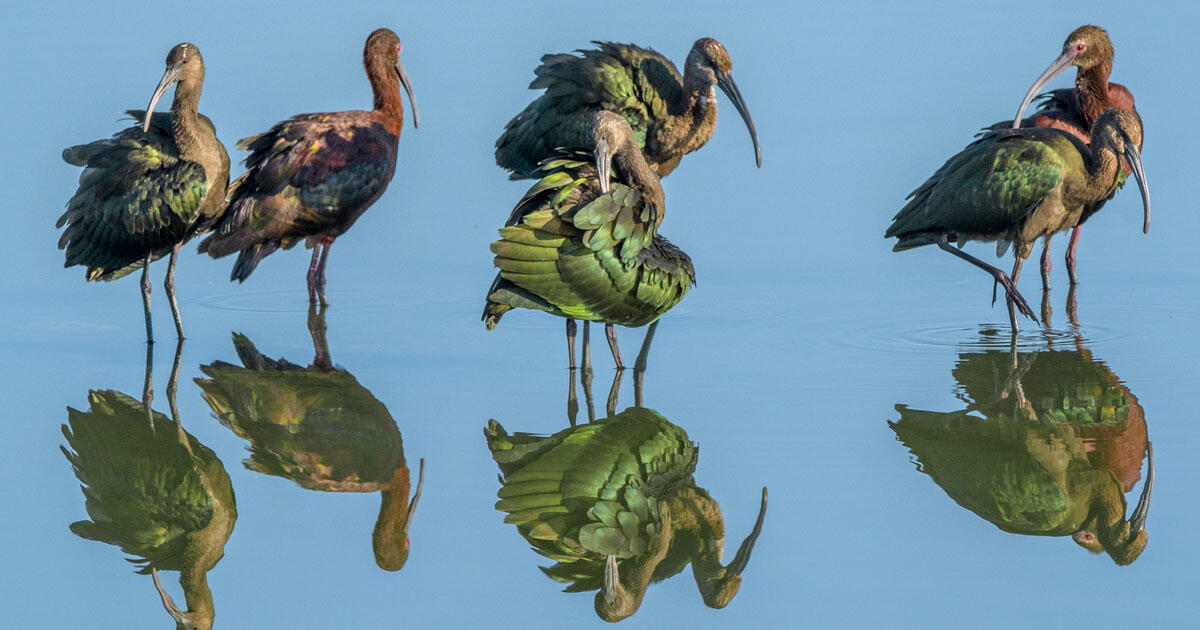 Large numbers of shorebirds, waterfowl, and other waterbirds being reported at Great Salt Lake continue to impress. In the fall of 2018, biologists with the Great Salt Lake Ecosystem Program (GSLEP) estimated more than 3.2 million Eared Grebes (more than 85 percent of the North American population) were present at the lake. In July of 2020, GSLEP biologists counted 122,850 Wilson’s Phalaropes (more than eight percent of the North American breeding population).

Established with the purpose to manage and conserve the bird and aquatic communities of Great Salt Lake, GSLEP has conducted monitoring of migratory shorebirds, waterfowl, and other waterbirds at specific locations within the lake since 1997. The specific locations surveyed by GSLEP represent areas with particularly large counts of birds, and they occur predominantly in Bear River, Farmington, and Ogden bays. The resulting dataset—collected by GSLEP biologists and volunteers—is likely among the longest annual count datasets for wetland sites in the western United States.

This unique dataset offers the opportunity to go beyond impressively large counts to understand how bird numbers have changed in the surveyed areas over time. Audubon entered into a collaborative agreement with GSLEP to analyze changes in counts (trends) for 30 species and 7 species groups and to relate counts to water conditions. This post describes trends observed from 1997 – 2017.

Almost without exception, the total number of birds counted across areas surveyed by GSLEP remained unchanged or increased during spring and fall for the 37 species and groups analyzed. It is important to note that these trends do not apply to Great Salt Lake as a whole—just those areas surveyed by GSLEP. Some habitats, such as shorebird playa habitat, may be under-represented within the surveyed areas. Additional work is required to understand why counts were stable or increased, as these trends do not necessarily indicate that habitat conditions were stable or improving in the surveyed areas.

Regionally across western North America, assessments indicate that surface water resources are declining. With declining regional conditions, birds may be pushed to the surveyed areas at Great Salt Lake because they are running out of places to go. Coordinated monitoring of birds and habitats across the region will be required to evaluate the effect of regional conditions on bird use of the surveyed areas. For this reason, Audubon strongly supports the recently introduced federal legislation to conduct a regional, scientific assessment of saline lakes. The bird numbers, along with the stable and positive trends at Great Salt Lake, suggest that the surveyed areas continue to provide important migratory habitat that must be conserved to support key species. However, explicit objective setting and management planning for shorebirds, waterfowl, and other waterbirds will be key to securing the habitat and food sources for the future.

While total numbers were mostly stable or increasing, the analyses did reveal specific areas where counts for species or groups declined. For example, Franklin’s Gulls and Willets showed declining numbers in some areas within Farmington and Ogden bays. Areas of decline could become the focus of conservation and management actions and help to ensure the surveyed areas continue to support birds and their habitats.

It is imperative to maintain the ability of Great Salt Lake and its associated wetlands to support birds and their habitats. Great Salt Lake is so significant to breeding and migrating shorebirds, waterfowl, and other waterbirds that each one of its five bays is individually recognized as a global Important Bird Area, an area critical to the international conservation of bird populations. Utah Governor Cox has declared 2021 the “Year of the Shorebird” in recognition of the 30th anniversary of the lake’s designation as part of the Western Hemisphere Shorebird Reserve Network. Audubon’s Saline Lakes program also recognizes Great Salt Lake as critical to a network of lakes and associated wetlands that provide habitats for shorebirds, waterfowl, and other waterbirds in the otherwise dry Great Basin landscape.

Like other saline lakes across the globe, upstream water diversions, drought, and climate change have affected and will continue to affect water supplies needed to maintain Great Salt Lake and its associated wetlands for birds and for other services, such as brine shrimp harvesting and recreation. The importance of flows for Great Salt Lake has been recognized, and efforts are underway to identify, evaluate, and implement studies, programs, and policies to maintain flows to the lake.

Audubon will continue working with collaborators, including GSLEP, to characterize the factors at Great Salt Lake and regionally that affect birds and their habitats at the lake. It is through these efforts that informed conservation and management actions can maintain Great Salt Lake’s phenomenal bird numbers and its special status within the region, across the hemisphere, and within the global conservation community.