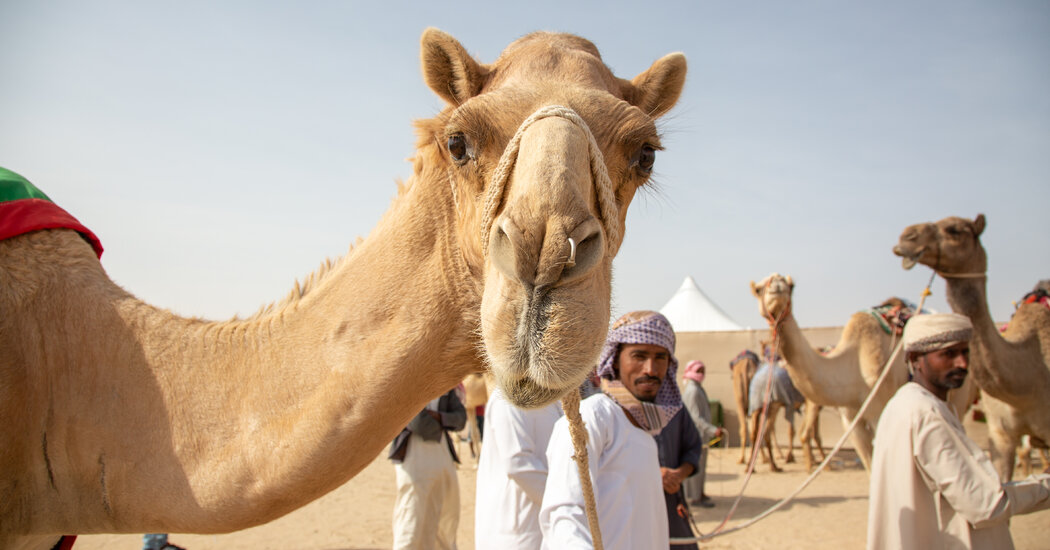 I had just arrived at the Al Dhafra Festival, and young boys in kanduras, or long tunics, were running toward my car, shouting as they pointed their index fingers in the air. In the distance, two men rode camels, each pulling another of the animals on a leash. One of the camels was draped in a gold-tasseled winner’s blanket.

Behind the men, slowly making its way across the sand dunes, was a large convoy of honking pickup trucks. Men and boys stood in the beds of the vehicles and leaned out of all the windows, waving and cheering, many of them filming the scene on their phones.

Without a second thought, I left my little rental car behind — I wouldn’t have gotten far in the deep sand, anyway — and jumped on the back of the nearest pickup. I wanted to be part of this impromptu celebration.

The annual Al Dhafra Festival celebrates Bedouin traditions, and takes place at the edge of the Rub al Khali, or the Empty Quarter, considered the largest sand desert in the world, near the Emirati city of Madinat Zayed, a two-hour drive southwest of Abu Dhabi.

Highlights of the gathering include Saluki races (the dogs are prized by the Bedouin because of their speed and eyesight), poetry readings and exhibitions on falconry and traditional artisanship. From fresh dates to camel milk, there’s also an array of food and drink.

At the heart of the festival, however, are the camel beauty contests.

During the weekslong event, Al Dhafra is the epicenter of the camel universe. In 2019, the year I attended, more than 24,000 camels from all over the Middle East competed for 60 million Emirati dirham in prize money — the equivalent of more than $16 million. Vast sums of money also change hands as particularly beautiful camels are sold.

Some participants trace the origins of the beauty contests to a family dispute in 1993, when two camel breeders had to call on some independent judges to determine whose animals were more beautiful.

Since then, camel beauty contests have evolved into a multimillion-dollar industry, with state-sponsored heritage festivals held all across the country.

The aims of the Al Dhafra Festival, which was formally initiated by the government in 2008, are to celebrate Bedouin culture, generate tourism and preserve the purity of certain camel breeds.

Bedouin society has all but vanished in the last fifty years. Modern borders have stifled nomadic herding patterns, and the encroachment of economic and technological change has upended other traditional cultural practices.

For urbanized Bedouins, festivals like Al Dhafra are one of the few ways they can meaningfully sustain their traditions.

Camel beauty competitions are divided into different categories, according to breed, age, sex and whether a camel is owned by a sheikh or a tribesman. The criteria, however, remain the same.

The ideal camel has long straight legs, a long neck, a shapely hump (in just the right spot on its lower back), pert ears, expressive eyes framed by upward curled eyelashes, long droopy lips and, of course, a sleek coat and elegant posture.

No supermodel is complete without jewelry, and an entire industry has sprung up around the beauty pageants to provide the appropriate accouterments. Camel tailors, for example, set up camp at Al Dhafra, where they sell colorful reins, shiny camel blankets laced with tinsel tassels and even glittering necklaces made of plastic beads and stringed coins.

Million Street, the road along which the camel superstars strut, transforms into an open-air market of tents, caravans and food trucks.

The market isn’t simply a place to purchase camel tack and shampoo. Also on offer are colorful winter blankets, coffee serving sets, stoves, rugs, hunting gear, foldable chairs, waterskins and an assortment of clothing. Bright lights advertise restaurants that serve kebabs, cakes and sweet karak chai. There are even laundry services to keep the celebrants — both the people and the camels — looking pristine.

Emirati women play a limited role during the festival. Customarily excluded from participating in the camel competitions, women and children spend much of their time around their family tents or at a nearby market.

As a foreigner, however, I seemed to be exempt from the gender restrictions and, during my three-day visit, was able to walk around freely, attend the camel beauty contests and join the owners at the winners’ celebrations.

As the sun set and the sky turned a dusky purple, canopies adorned with thousands of lights began to sparkle among the dunes. Inside were members of the Bedouin tribes, usually scattered all over the region, who had come here to honor their traditions. Each tribe had set up a lavishly decorated tent.

Invited to celebrate one of their camels’ wins, I joined the men of the Almuharrami family into their illuminated tent, following Waheela, a beauty queen.

“She has just been crowned the most beautiful young camel in the Middle East,” said Muneef, her 12-year-old owner, beaming with pride.

And then the music began, and the men lifted their bamboo canes to perform the yowlah. During the traditional stick dance, men chanted poetry and simulated a battle scene. By the time I left the party, the sky had turned inky black, with the revelry lasting deep into the night.

Kiki Streitberger is a photojournalist and documentary photographer based in London and Germany. You can follow her work on Instagram.