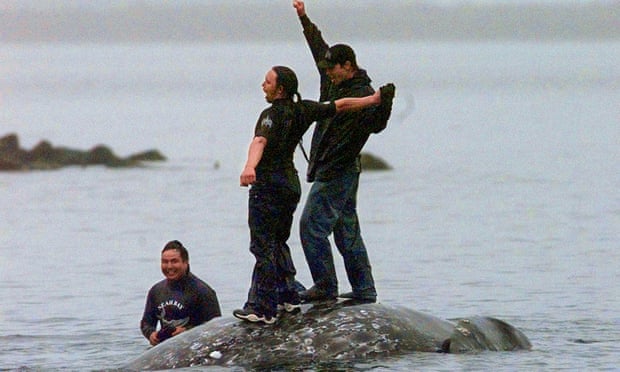 An administrative law judge has recommended that a Native American tribe in Washington state be allowed to hunt gray whales – a major step in its decades-long effort to resume the ancient practice.

“This is a testament to what we’ve been saying all these years: that we’re doing everything we can to show we’re moving forward responsibly,” Patrick DePoe, vice-chairman of the Makah Tribe on the remote north-western tip of the Olympic Peninsula, said on Friday. “We’re not doing this for commercial reasons. We’re doing it for spiritual and cultural reasons.”

DePoe was in high school in the late 1990s when the Makah were last allowed to hunt whales, occasions that drew angry protests from animal rights activists who sometimes threw smoke bombs at the whalers and sprayed fire extinguishers in their faces.

Since then, the tribe’s attempts have been tied up in legal challenges and scientific review. A federal appeals court ruled in 2002 that the Makah needed a waiver under the Marine Mammal Protection Act. The tribe applied for one in 2005 but hasn’t received it.

On Thursday, nearly two years after he presided over a hearing on a government proposal to approve the waiver, administrative law judge George Jordan issued his 156-page recommendation to the US Department of Commerce, finding that the tribal hunts would have no effect on the healthy overall population of the whales.

The recommendation, with a public comment period and further environmental analysis, will inform the final decision, though no timeline has been set.

While Jordan found the waiver’s issuance appropriate, he also recommended additional restrictions that could drastically cut the number of whales the tribe kills – perhaps as low as five over the decade-long waiver period. DePoe said the tribe was reviewing that recommendation but called it a potential source of frustration and further discussion.

The tribe hopes to use the whales for food and to make handicrafts, artwork and tools they can sell.

The Sea Shepherd Conservation Society and Animal Welfare Institute oppose the hunts. They argued that environmental review has been inadequate, that the Marine Mammal Protection Act may have voided the tribe’s treaty right, and that the tribe cannot claim a subsistence or cultural need to hunt after so many decades.

The Sea Shepherd Conservation Society said in an email it was reviewing the decision and had no immediate comment. The Animal Welfare Institute did not respond to an email.

Evidence presented to the government showed that the Makah, who now number about 1,500, have hunted whales for more than 2,700 years. The tribe’s 1855 treaty with the US reserved the “right of taking fish and of whaling or sealing at usual and accustomed grounds”.

The Makah continued whaling until the 1920s, when they gave it up because commercial whaling devastated populations. The gray whale population rebounded in the eastern Pacific by 1994 – it’s now estimated at 27,000 – and they were removed from the endangered species list.

The Makah trained for months in the ancient ways of whaling and received the blessing of federal officials and the International Whaling Commission. They took to the water in 1998 but didn’t succeed until the next year, when they harpooned a gray whale from a hand-carved cedar canoe. A tribal member in a motorized support boat killed it with a high-powered rifle to minimize its suffering.

DePoe was on a canoe that greeted the returning whalers as they towed in the whale, and his high-school shop class worked to clean the bones and reassemble the skeleton, which hangs in a tribal museum.

“The connection between us and the whales is strong,” he said. “Tribes across the north-west have always considered ourselves stewards of the land, stewards of the animals. We’re not trying to do anything that is going to add to the depletion of these resources.”

This article was first published by The Guardian on 25 September 2021. Lead Image: In a picture from 17 May 1999, two Makah whalers stand atop the carcass of a dead gray whale at Neah Bay, Washington. Photograph: Elaine Thompson/AP.