Inside the Thai Temple Where Tattoos Come to Life 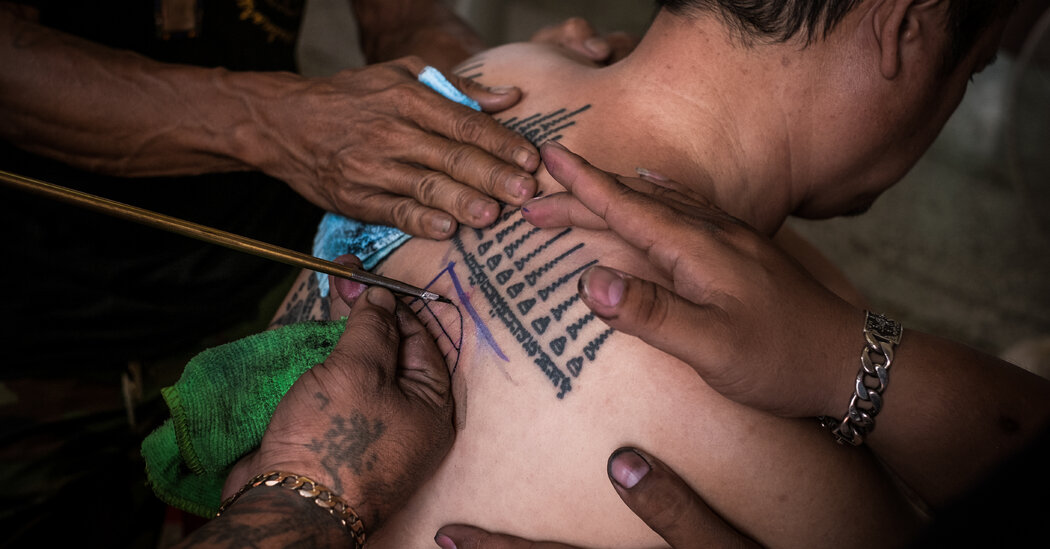 The sky was streaked with purple when I boarded the early-morning train from Bangkok to the Nakhon Chai Si District in central Thailand. For the entire hourlong ride, a monk sat quietly in front of me, smiling, gusts of wind swirling the orange robes over his tattoos.

We disembarked at the same stop, a small station surrounded by thick trees and rice paddies. I watched as he took a seat on the back of a motorcycle and sped off, followed closely by several other passengers. One of the last people left at the station, I asked the only remaining driver if he could take me to the Wat Bang Phra.

A few minutes later, the golden spires of the temple, glowing in the sunlight, came into view.

It was 2016, and, having just completed an assignment in Bangkok, I had a free day before departing for Cambodia.

For years I’d been intrigued by the designs of certain tattoos I’d seen throughout Southeast Asia, and I wanted to find out more. A close friend, hearing of my interest, directed me to Wat Bang Phra.

The early history of Wat Bang Phra is murky, though the temple likely dates back hundreds of years. By the 20th century it had become the renowned home of the practice known as sak yant, a form of tattooing that, according to believers, conveys protective powers along with the ink of its scripts, geometric patterns and animalistic designs.

The monk Luang Phor Pern, a venerated guru who served as the abbot of Wat Bang Phra and died in 2002, is credited with refining and popularizing the temple’s sak yant style. (The idea that tattoos confer special powers has existed in parts of East Asia — from China and India to Thailand and Cambodia — for thousands of years.)

When I arrived at the temple, I walked past the imposing statues of tigers guarding the main entrance and slowly made my way through a maze of ornate buildings and pavilions. Removing my shoes and entering a crowded hall, I found myself weaving through dozens of tourists who had arrived hours before me and were sitting on the floor, waiting in the dim light.

In front of them, two sak yant masters were tapping on the backs of two men with long thin needles, intently focused on their swift, precise and hypnotic jabbing.

After a few moments of disorientation, I made my way to the grand hall, where the temple’s current abbot, Luang Phor Samang, was sitting before a long line of devotees. The visitors were on their knees, holding trays of offerings.

I purchased an offering set for around 100 Thai baht, or about $3, and joined the line. When it came time to speak with the abbot, I described my intentions: I was not here for a tattoo, I said, but was hoping to take pictures of the monks and their practice. While photography, under normal circumstances, is strictly forbidden, the abbot smiled and granted me permission.

Translated literally, sak yant means “to tap yantras,” a word that refers to the geometric designs used as aids in tantric meditation. Yantras are believed to bring health, wealth, protection and a number of other benefits. The practice is embraced by some Thai monks, though it is not specifically related to traditional Buddhist teachings. The practice’s origins — and its purported effects — are both spiritual and superstitious.

The designs used in sak yant include geometric motifs, animal shapes and divine representations, accompanied by phrases and spells in Pali, an ancient language closely related to Sanskrit.

Eventually I wandered to the temple’s second floor. By then, most of the sak yant masters, along with a handful of unordained tattoo artists, had paused for their midday break. Only one was ready to start again. Seated on an armchair, he welcomed me to sit beside him.

This monk was responsible for listening to visitors’ wishes, problems and weaknesses, and for guiding them to the right choice of tattoos. In front of him, a newlywed Thai couple was going through a heavy plasticized catalog brimming with designs: deities, tiger figures, geometric shapes.

To be spiritually and superstitiously effective, sak yant tattoos traditionally require their bearer to follow a certain lifestyle. A personalized list of rules and moral vows — often including Buddhist precepts and, in some cases, dietary restrictions — is established by the monk who blesses them. If the prescribed rules aren’t followed, then the tattoo will not confer its benefits.

Back downstairs, I watched as a monk repeatedly pressed a needle into the back of a man who, clearly in pain, had to be held still by two assistants.

I was struck by the silence of the ceremony and the speed of the tapping process. A sak yant master takes between 15 and 30 minutes to complete a simple tattoo, which might consist of around 3,000 jabs.

At Wat Bang Phra, a devotee’s first tattoo is usually placed as close to the head as possible — typically on one’s back, at the base of the neck — in the form of a triangular shape called a “kao yot,” often considered the most important sak yant motif. The nine-spired design is known for its universal protective power.

Elsewhere in the temple, I found the workplace of the trained laymen who had been granted permission to practice their art at Wat Bang Phra despite not being ordained as monks.

Some of them outlined their designs before beginning, while others began tattooing directly on blank skin. All of them used long metal needles, about 18 inches in length, in place of the sharpened bamboo sticks that were used historically. They paused from time to time to dip their needles into bowls of dark ink.

These men cannot perform blessings, so, to be spiritually effective, their tattoos, once completed, must be blessed by a master monk.

After observing the rituals, I sat for a while in the temple’s lush gardens, watching the river flow past and listening to schoolchildren chatting and laughing along its banks.

The practice of sak yant, I knew, was not without controversy. Some question its hygiene; others worry that, as international interest in the practice grows, sak yant’s spiritual elements are being lost, leaving only the shell of its aesthetic appeal.

But seated at Wat Bang Phra, I felt more hopeful. Here, there was a real sense that this ancient form of spiritual art — interwoven with mysticism and the ancient threads of history — was finding new practitioners, new expression, new life.