Inside a Volcanic Ritual on the Indonesian Island of Java 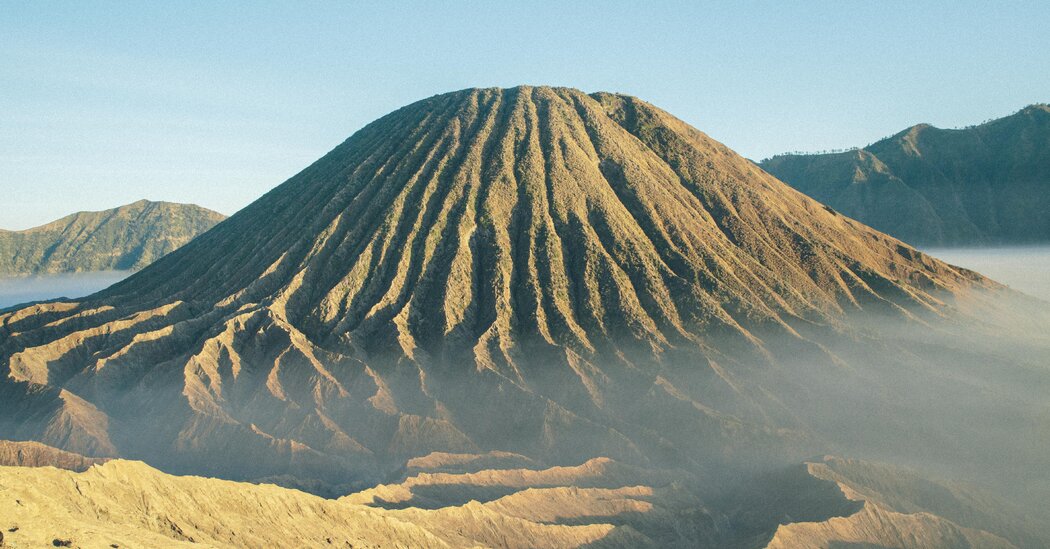 When I reached the top of the volcano and glanced back down, I could see the fog hovering over the thick carpet of ash that surrounds its base. A few golden rays of sunlight were beginning to streak across the eastern horizon, illuminating the temple, Pura Luhur Poten, that I had visited earlier in the morning.

The steep climb to the rim of the crater had taken me 30 minutes, much of it through powdery dunes called sea sand. The wind was relentless. Here at the top, staring down into the sulfuric abyss, I could witness up close what I’d come to the mountainous Indonesian island of Java to see: the Hindu ritual of Yadnya Kasada, during which the Tenggerese people toss offerings — food, money, flowers, livestock — into the hazy crater of the volcano, Mt. Bromo.

Indonesia is home to more than 120 active volcanoes, along with several hundred more that are now considered extinct. On Java, the country’s most populous island, a string of volcanoes stretches like a backbone, from east to west, some 620 miles, giving rise to dense communities that rely on the fertile volcanic soil to farm.

Among them are the Tenggerese, an Indigenous people who live on the slopes of an inactive volcanic crater in the Tengger highlands, in the province of East Java.

I traveled here from my home island of Bali in June and July 2018 to visit two Tenggerese villages: Ngadas and Ngadisari.

Mount Bromo — named for Brahma, the Hindu god of creation — is an active volcano in the Bromo Tengger Semeru National Park. Rising to ​​7,848 feet, it last erupted in July 2019, causing tremors and triggering panic among the highland locals.

As if mimicking a set of nesting dolls, Mount Bromo sits inside the massive caldera of an ancient and far larger volcano, Tengger, out of which several new cones have emerged.

On the day of Yadnya Kasada, my friend, Rizki Dwi Putra, and I departed from our inn in the village of Ngadisari at 1:30 in the morning, traveling slowly by motorbike through the dense fog.

The ritual began at the temple located in the sea ​​​​sand near the base of the mountain. By 2 a.m., thousands of people had already gathered there. The Tengger shamans chanted mantras and prayers before they began their ascent toward the rim of the crater, followed by a crowd of pilgrims.

Once they reached the rim of the volcano, the pilgrims prayed and began preparing their offerings, lighting incense and chanting mantras. Then, one by one, they began throwing their gifts into the crater.

Other people, standing precipitously on the crater’s slopes, tried to catch the offerings with nets, in hopes of salvaging something of value.

There are several myths about the origin of the Kasada ritual, though the most popular version involves a husband and wife who, childless, prayed to the gods of Mount Bromo to provide them with offspring. The couple made a vow to the gods that, if blessed with 25 children, they would return to give the youngest to the mountain. The gods granted their wish and gave them 25 children, but the husband and wife broke their vow.

The mountain gods grew angry, and, as a result, Mount Bromo erupted, claiming the couple’s youngest son. Afterward, the boy’s voice was heard calling out from the mountain, ordering his family to return each year with offerings to ensure their prosperity.

In recent years, Bromo Tengger Semeru National Park, which covers more than 300 square miles, has become an increasingly popular tourist destination. Here, visitors can learn about how the geology of the region — and the constant threat of eruptions that can endanger nearby villages — has influenced local cultures and beliefs.

During my visit, the local Tenggerese people greeted me kindly, asking what I was up to and where I was from. Having once learned a little Javanese while studying in the nearby city of Yogyakarta, I was able to communicate in the local language, which made conversation all the easier.

At one point, while walking through the village, I met a farmer named Suyono who invited me into his house and offered me tea and snacks, which I happily enjoyed.

Suyono, who was 48 at the time, was roasting two chickens while his wife, Rumini, 45, made cakes to be used as offerings atop the volcano. Like most of his fellow Tenggerese, Suyono was Hindu, a minority group in Muslim-dominated Java.

I asked him what Yadnya Kasada meant to them.

“Mount Bromo is a holy place where the gods reside,” Suyono said. “The Kasada ritual is a form of respect for the gods.”

The volcano had given his family everything, he said, including the fertile soil surrounding their home, along with their good harvest. And the mountain, he added, must be respected and honored in return.

Putu Sayoga is a documentary and travel photographer based in Bali. You can follow his work on Instagram.