In Los Angeles, Glimpses of an Oasis With Deep Immigrant Roots 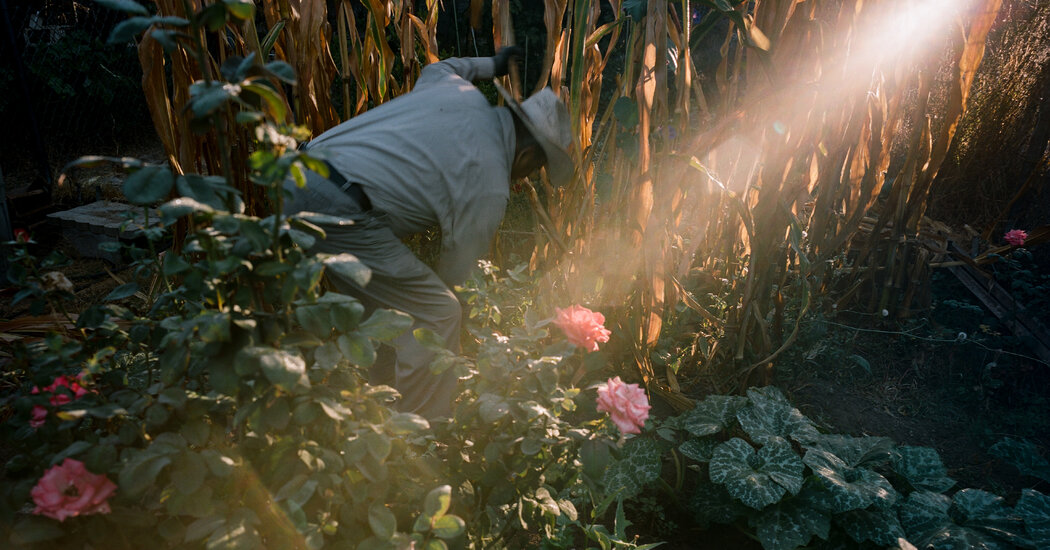 Ten minutes from my home, next to a decommissioned landfill, a freeway and the largest port in the country, sits an unlikely hillside oasis of vegetables and fruit trees.

Emerging like a mirage from its surroundings, the San Pedro Community Gardens occupy a six-acre parcel of city-owned land in the otherwise highly industrialized area of the blue-collar harbor community of San Pedro, in Los Angeles.

Once part of the ancestral land of the Tongva, an Indigenous people of California, the site — now divided into 224 family plots and one communal plot, each averaging 30 feet by 40 feet — has provided physical and spiritual nourishment to multiple generations of immigrant Angelenos, ever since gardeners first began working the soil here in the 1960s.

As many rural people were pushed into cities and across borders by industrialization and urbanization, some turned to the gardens for refuge, connection to home and a means of preserving and passing on their cultural heritage.

Raúl Laly Fernández, who grew up in the small town of Purépero in the Mexican state of Michoacán, joined the community gardens in 1986, about 20 years after immigrating from Mexico City.

“Most of the people who garden here used to live in Mexico in small towns and on ranches, where they worked the land for other people who own the fields — we call them campesinos,” he said. “And so when they came over here, well, now they are working in the city. For them this land means a lot because working with the soil here, they feel like they are back home.”

Mr. Fernández spoke to me of his early days at the gardens: “Before I retired, I would come here after work, grab a shovel and start working in the ground. And all the stress, all the tension you have from work would just go away,” he said. “I would take care of my plants or go talk to my garden friends. Sometimes, we’d play cards, Mexican games that we know.”

For Mr. Fernández, the gardens provided a much needed daily respite and community space that he found otherwise lacking in Los Angeles.

“The way most people live in Mexico, especially in small towns and cities, in the evening after work they go out to the plaza where people gather,” he said. “They sit on a bench and talk, saying hi to people who are passing by, because almost everybody knows each other. Here we cannot do that.”

As a Russian-Ukrainian American who moved to the United States as a teenager and later married a second-generation Mexican American, I find myself drawn to stories of migration, severed connections, longing for one’s culture and the making of new homes.

When I discovered San Pedro Community Gardens in 2019, I instantly connected with the expressions of longing for ancestral lands that I saw in this lovingly cultivated landscape. At the time, amid California’s drought, the gardens had closed for water infrastructure improvements. They reopened in June 2020, and I continued learning about the community’s story through the trauma and disruption brought on by the pandemic, and exacerbated by structural racism.

Kimberly Mentlow, a new gardener who was born in Ohio but raised in Los Angeles, is eager to become a part of the community. She just received her plot after three years on the waiting list. Working alongside the gardeners — sweating with them, getting dirty with them, growing and sharing things with them — was particularly important to her, she said.

“I’m really excited about getting to know them, experiencing them, learning about their families or seeing what their passion is, what they want to grow, who they are as expressed through their garden,” she said. “I can look at my friends Liz’s and Dave’s gardens, and you kind of sense who they are. You can feel their art, their culture, their creativity, their experiences, their loves.”

In joining the garden, Ms. Mentlow is also seeking a release from the stress of her job and a connection to the earth. “Time passes, and you’re not looking at your watch,” she said of her time spent gardening. “You are just in that moment.”

For many gardeners, their family plot has served multiple generations and memorializes family members who have passed on.

Johny Cracchiolo, who immigrated from Palermo, Italy, with his parents in 1968, took over his plot from his father, who died 23 years ago. “This is my home away from home,” he said, nearly tearing up. His father, he said, had farmed the land for 30 years. “So this plot has been my father and I for 50 years.”

Imelda Ladia shares a similar family history. After retiring in the Philippines, Ms. Ladia’s father migrated to Los Angeles to join his daughters. In time, he wanted to return to the Philippines, but Ms. Ladia tried to give him a reason to stay.

“He loved growing plants, so we got him a plot here,” she explained. Since then, more than 30 years have passed. “We would come over here with my sister, brother-in-law and my husband and we would help him. We loved to help him and he was so happy.”

After her father died, Ms. Ladia and her family decided to continue farming his plot as a celebration of his legacy. “Our heart is in the garden,” she said.

For some people, working the soil at San Pedro Community Gardens is a chance to repair severed connections to ancestral homelands.

David Vigueras’s family has lived in Los Angeles for generations, and he uses the garden to reconnect with the ways of life of his Indigenous Yaqui ancestors from Sonora, Mexico. “I’ve been all over Mexico, but I’ve never been to the homeland, the Hiak Vatwe,” he said. “I’m trying to emulate the way my people, my ancestors, might have approached this garden.”

Mr. Vigueras also cherishes the gardening community’s diversity. “What I think is beautiful here is all the ethnicities in this garden, the diverse cultures that people come from, and that we’re all sharing what we grow,” he said. “You have Italians growing Mexican chiles, other people growing Italian eggplant.”

“We are cross-pollinating,” he said.

Over the course of my reporting, the gardeners at San Pedro welcomed me in and gifted me with their wisdom, their stories and the fruits of their labor. They also taught me how to work with the soil and plants, which gave me a deeper understanding of the garden itself. Close friendships followed. Eventually, the garden became the place where I spent the most time away from home during the pandemic’s pre-vaccination days, thanks to the relative safety that the outdoor community space provided.

My own family in Ukraine grows much of their own food, and so I related deeply to the gardeners’ desire to recreate a piece of their homeland, reconnect with a lost way of life and grow deeper roots in their adopted home — all while nurturing not only their family’s health but the health of an entire community.

Stella Kalinina is a Russian-Ukrainian American photographer based in Los Angeles. Her stories focus on human connections, personal and communal histories, and the places we inhabit. You can follow her work on Instagram.