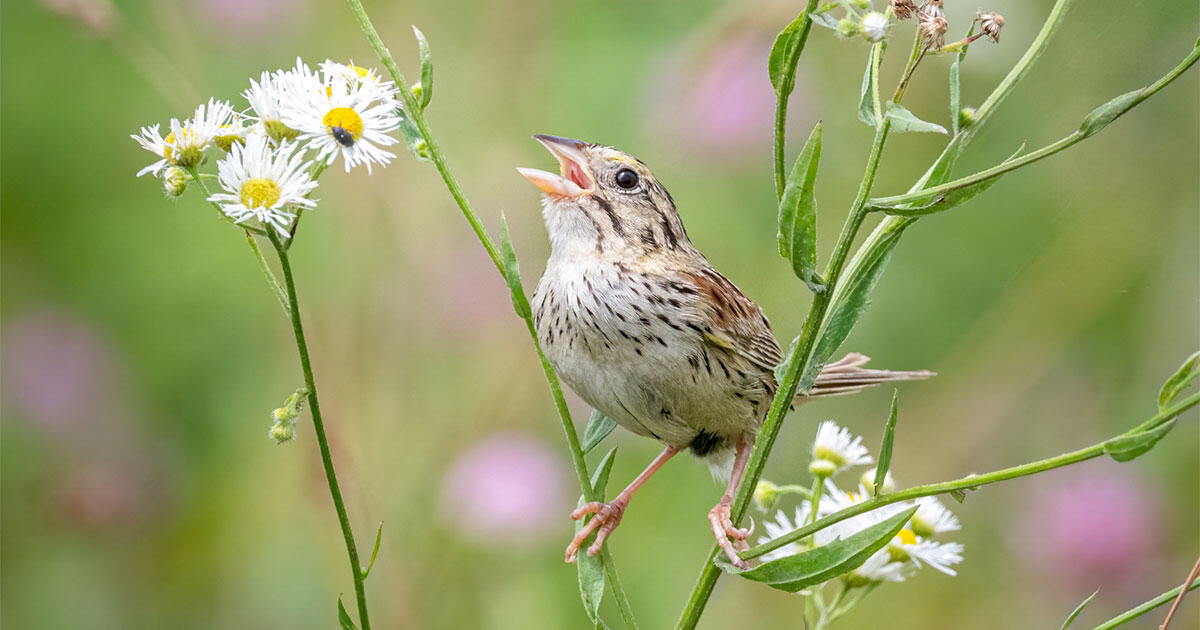 One summer day in 2020, Katey Buster decided to bird at a local Kentucky winery in hopes of adding a Henslow’s Sparrow to one of her eBird county life lists. Little did she know that her birding excursion would lead to a new discovery about the species.

That day Buster, a member of the Central Kentucky Audubon Society, only expected to hear or see a couple Henslow’s Sparrows—one of Kentucky’s Species of Greatest Conservation Need, as labeled by the Kentucky Department of Fish and Wildlife—at Talon Winery. Instead, she was greeted with approximately six of them darting amid the area’s grasses, an uncommon sight in Lexington, Kentucky.

“I was so excited, but then, I heard the roar of a tractor motor,” says Buster. “So I looked around and saw that [the winery] was getting ready to mow.”

She launched into action and called winery staff in hopes of persuading them to save some acreage for these songbirds. Since they were aware of the chapter’s mission to protect birds, they were more than willing to help. Later that day, Buster, Tony Brusate, the president of the chapter, and David Lang, the vice president, staked off five acres of land that surrounded the sparrows, hoping that it would be enough for them to breed.

But once the team started to learn more about this species, they realized that there was a problem: previous research concluded that Henslow’s Sparrows needed far more land to nest. In fact, several studies showed that the sparrows require at least 20 to 75 acres in order to successfully raise their brood.

“[Our staked acreage] was considerably less than any of the research we looked at,” says Brusate. “Everything said this shouldn’t work. If I had known that first, I don’t know if that would have deterred me, but we had everything set up, and we said that we’d try it.”

To their surprise, the Henslow’s Sparrows made their nesting homes within the five allotted acres and stayed for the entire breeding season.

Chapter members continued to monitor the birds throughout the season to make sure that they were indeed raising young. Lang spent the hot summer days in a bird blind photographing them to confirm that the adults were bringing back food to the nests and carrying out fecal sacs, both key signs that the sparrows had successfully bred.

Even the Kentucky eBird community joined in the observation process as photographers from far and wide visited the winery to photograph the adults and, later, the fledged young.

Once the last of the Henslow’s Sparrows had left for the season, the team realized what a significant discovery they made. Brusate submitted the chapter’s findings on protecting the sparrows to the Kentucky Ornithological Society’s peer-reviewed journal, the Kentucky Warbler, for others to discover and replicate elsewhere.

“Publishing this report was important because it’s something to use with people or businesses with large amounts of acreage,” says Ronan O’Carra, a chapter board member and editor of the Kentucky Warbler. “They may not be willing to give a huge amount of land, but even five acres would be enough.”

It turned out that the 2020 breeding season was not a unique occurrence for the sparrows. The next year, the songbirds returned to Talon Winery’s grasses and, with five acres once again staked off, produced two broods that season. This year, chapter members are continuing to collaborate with the winery to prepare the sparrows’ five-acre summer home.

Looking back, members reflected on the efforts it took to save these sparrows. One key factor was being able to work with Talon Winery—a partnership they’re thankful for, since they faced obstacles in the past working with other businesses to save bird habitat.

Of course, the most important piece of this conservation success story was actually finding where the birds were, as Buster did on that summer day.

“[The Henslow’s Sparrows] already picked the ideal habitat, and we just saved five acres of it from getting hayed,” says Brusate. “Somehow that made all the difference.”