How I Learned to Love Wild Turkeys 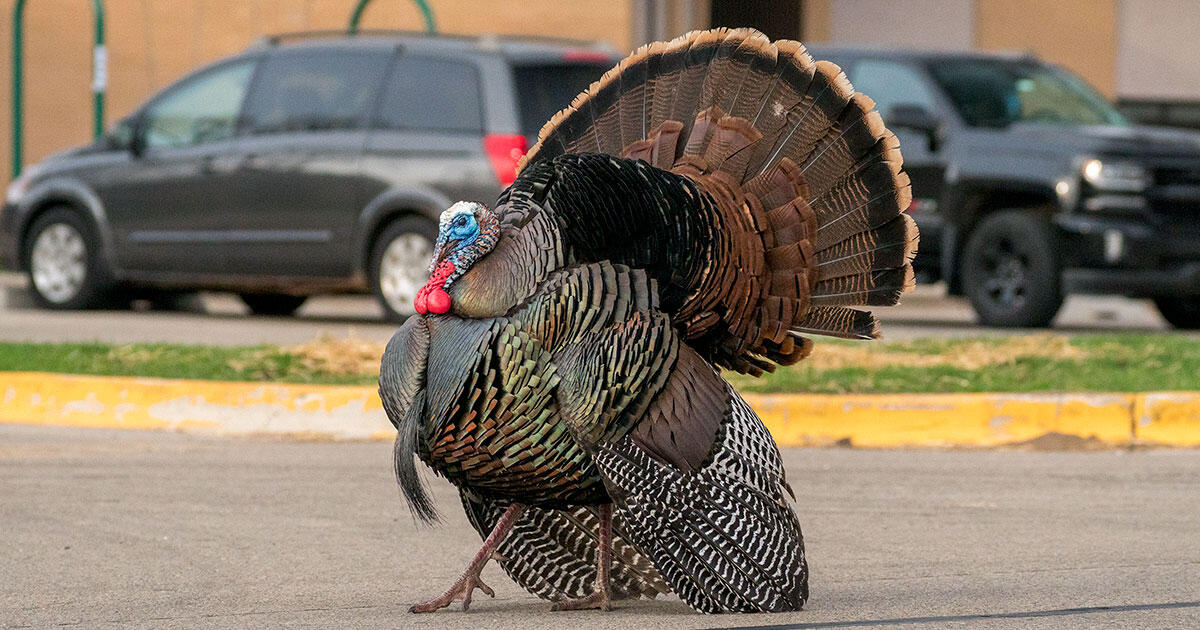 When my husband and I moved to Eagle Heights in Madison, Wisconsin, last December, we were caught off guard. In many ways, Eagle Heights had everything you would expect from a residential area in a college town: a big cluster of apartment buildings with sprawling lawns, parking lots, community gardens, playgrounds, and woods at the edge of the University of Wisconsin-Madison campus. If that sounds typical, it was—with one major exception.

It was also one of the hottest neighborhoods in town for Wild Turkeys.

Most days, we saw between four and seven groups of turkeys—around 30 birds total—casually eating or sleeping around the apartments. Meanwhile, people went about their daily lives around the birds. Children swung on swings with a turkey or three nearby. Drivers routinely stopped to let turkeys cross the road, occasionally getting out of their cars to shoo them along. Cyclists whisked by, sending the turkeys scampering away. Pedestrians walked mere feet from them, sometimes stopping to take photos but more often glued to their phones. “For the most part, people kind of ignore them,” says PhD student Audrey Evans, founder of the Turkeys of UW Madison Instagram page, who has lived in Eagle Heights since 2017.

That’s not easy. If you’ve never seen a Wild Turkey up close, they are big! Toms (adult males) weigh more than 20 pounds, which makes them the second heaviest North American bird after Trumpeter Swans.

I learned that other communities around the country are experiencing ballooning Wild Turkey numbers, originating in efforts to save the overhunted birds from extinction in the mid-1900s. Live Wild Turkeys were trapped and transferred from areas where they were flourishing to areas where they had disappeared. Those measures were extremely successful—perhaps too successful. Today there are around six million Wild Turkeys in the United States, and hordes of them flock to residential neighborhoods, where they sometimes cause trouble by occasionally raiding gardens, leaving droppings, and acting aggressively to pets and people.

My husband and I had experienced turkey neighbors before: Years ago, when we lived in Illinois, a couple of turkeys appeared in our yard. Then, when we moved to Wisconsin, we started to notice them in neighborhoods throughout Madison. But the number of birds in Eagle Heights was like nothing we’d encountered. Our new neighborhood was likely especially appealing because it had an abundance of turkey-friendly foods (for example, acorns, crabapples, plants grown in community gardens—plus, the occasional handout from humans). Also, dogs, which may deter turkeys in other neighborhoods, were generally not permitted in Eagle Heights. Fascinated, we began to learn all we could about turkeys. We learned, for example, that each flock is generally made up of siblings. Brothers (“jakes” when they are young) band together in all-male groups, and their sisters (“jennies” when they are young) form flocks with their mothers, called hens.

I began photographing our neighborhood birds, which helped me learn more about them. I have been a photographer since 2019, and this project was unusual for me because I typically document much smaller creatures, such as insects and amphibians. During the week, I would squeeze in an hour or two with the turkeys; on weekends, I’d sometimes spend an entire day following them, from dawn when they flap down from their roosting trees to dusk when they flap back up.

During the spring breeding season, the turkeys were especially awe-inspiring. Toms puffed out their iridescent copper-colored feathers, fanned their tails, and inflated their bright red “wattles” and “snoods” (fleshy protuberances that hang off their faces). Bands of puffed-up brothers strutted around the community, dragging their wings on the ground to make an unmistakable scraping noise (“I’m big!”). The sound of synchronized turkey gobbles reverberated across the neighborhood (“We’re coordinated, so don’t mess with us!”). Flocks of hens drifted from band to band, acting coy but slyly checking out their options for a mate.

Soon, summer came, and I began to appreciate the turkeys’ more subtle behaviors. The hens moved to the forest to raise their young, called poults. They stood guard while their fluffy brown babies scratched in the leaf litter for food and jumped to grab insects, seeds, and berries off plant stalks. All the while, the hens and poults contentedly purred to one another.

The toms stayed around the apartments. Like many human siblings, they often squabbled—pecking, pushing, and chasing each other. I also saw them eating ants off sidewalks, taking dainty sips from leaky hose spigots on hot days, sitting at picnic tables for an afternoon siesta, and feeding on fallen acorns cracked open by passing cars.

At night, the turkeys roosted in tall white pine trees around the apartments. I could hear their cackles and the whooshing of their wings as they flew to and from their roosts. In the trees, they clucked to each other in hushed voices.

To me, these Eagle Heights turkeys didn’t seem like the “nuisance” birds “terrorizing” neighborhoods elsewhere, as local media coverage has implied in many areas. Evans generally agrees: “I’ve never heard anyone from the Eagle Heights community really complaining about turkeys,” she says.

Evans has experienced being chased by the birds, however. The first time, she and her roommate were walking along a sidewalk in the community. There was a “big and poofed up” tom standing about four feet away.  “It wasn’t skittering away like they normally do… and it started chasing me. I’m running for my life and finally it gives up the chase on me and it turns around and it starts chasing my roommate that had been laughing at me the whole time!”

Jeff Kirchman, a police officer with the UW-Madison Police Department, says that the local toms can be aggressive during the breeding season when they are full of testosterone and ready to challenge perceived competitors. “When you have something that size chasing behind you in an aggressive manner… that can be pretty unnerving,” he says. However, he adds that these problems typically go away by late March or early April, as the breeding season winds down. And despite some problems with the turkeys, he would be really sad to see them gone, he says.

In fact, the university police have made special efforts to educate residents on how to co-exist with turkeys through one-on-one conversations with residents and upbeat newsletters with tips on how to avoid conflict. Residents are encouraged to avoid areas where turkeys gather, act big and loud if approached, and not to feed the birds, which can make them aggressive. In community gardens, gardeners have resorted to simple solutions like fences around their plots to keep the birds out.

In general, people in Eagle Heights have found a way to happily co-exist with our feathered neighbors.

My husband and I no longer live in the neighborhood, but we still regularly visit to watch and photograph the turkeys. We also have turkeys that live around our house about a mile away, though in lower densities. For us, the occasional scattered mulch, pecked-on plants, and deck poop are a price we’re willing to pay to have these birds in our lives. We view our yard as space that we share with wildlife. Our relationship with our urban turkey neighbors may not always be perfect, but it is worth it for the joy they bring.