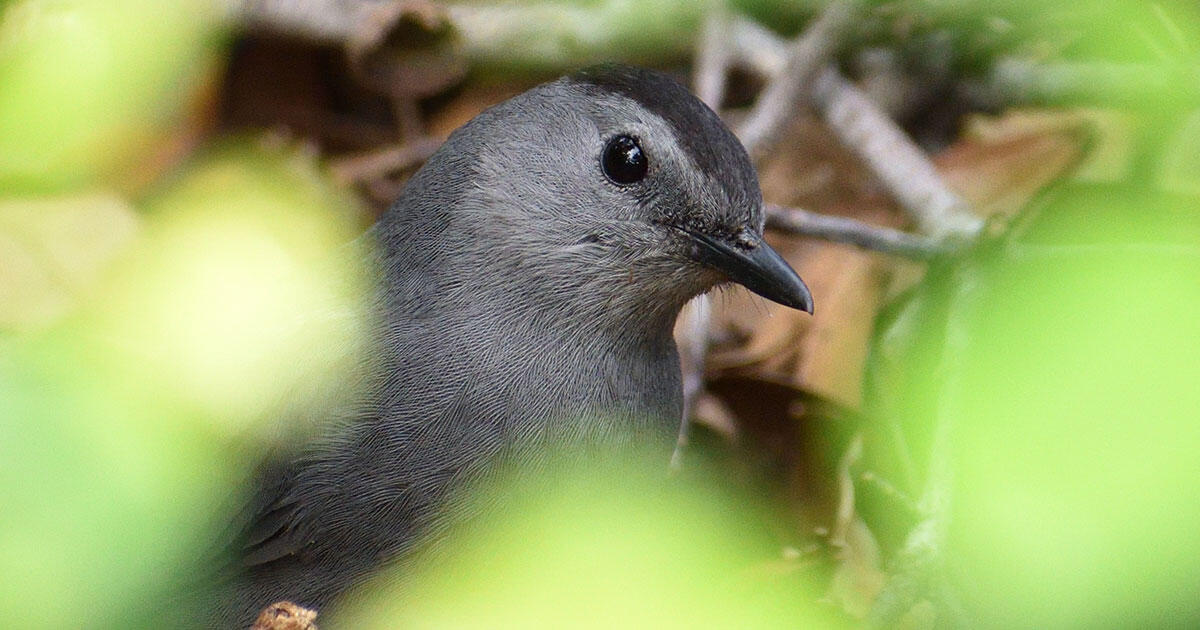 As a child, Kristen Mancuso would tie loose spools of string to crayfish in a stream behind her house and return to the spool to try and figure out where they went. “It never worked,” she laughed, “but that made me realize that I’ve always been interested in movement ecology.”

As a PhD student at the University of British Columbia, Mancuso tracked birds across entire continents. However, she had major upgrades to her childhood equipment. Last year, as Mancuso finished her graduate research, she used a combination of hydrogen stable isotopes, GPS tags, and light-level geolocators to track Gray Catbirds and Yellow-breasted Chats that breed in the Okanagan Valley. Her research was part of an ongoing effort to understand where these species move throughout the year and how we can best protect them throughout their full annual cycle.

“The Yellow-breasted Chats that breed in British Columbia are endangered, with only a few hundred breeding pairs. Gray Catbirds breed in similar riparian habitat, but in contrast are quite common. When we started, we had no idea where either species went during migration, which provided a great opportunity to compare and contrast the two species,” she explained.

The opportunity Mancuso described had been years in the making. Mancuso joined her advisor, Dr. Christine Bishop, as part of a large interdisciplinary team that is the result of key international partnerships between research groups like Klamath Bird Observatory, Tierra de Aves, and Environment and Climate Change Canada. “In the Okanagan Valley, often the most pristine areas of habitat are First Nation lands that haven’t been developed,” explained Mancuso. “So, naturally some of the key breeding sites were on First Nations land.” Mancuso and Bishop played a particularly key role in coordinating a relationship between the Penticton Indian Band and the broader Syilx Nation in order to engage both communities in data collection for their research.

As someone who identifies as First Nation, engaging these communities felt particularly important to Mancuso. While tagging birds, she worked closely with the En’owkin Center to follow their cultural procedures. She fondly recalled elders, who introduced her to the land and said prayers for the birds before tags were deployed. She also hired members of the Penticton Indian Band as part of her research team to regularly monitor the Yellow-breasted Chats. Mancuso was adamant that such collaborations were key to understanding movements of birds, which complete their migrations regardless of our borders. “All these connections came together to better understand the migration ecology of both species,” Mancuso noted.

This week, Mancuso and her team published some of their findings, which described the full annual cycle for Yellow-breasted Chats. They found that these birds, which breed in the south Okanagan Valley of British Columbia, migrate through the western U.S. to winter in western Mexico. The long list of authors from varied institutions is indicative of the kinds of international partnerships Mancuso described as key to successfully conducting this research. The same is true of the study her team published earlier this year on Gray Catbird migrations, which found that catbirds from the same breeding sites in the Okanagan Valley take long routes through the central U.S. to winter in northeastern Mexico. Mancuso was also excited to share that the Yellow-breasted Chat data collected by her team suggest some encouraging news: the endangered population seems to be increasing.

While she was excited to publish her findings, she admitted “I came into this project mostly focused on the science. But multiple stakeholders being able to come together for the purpose of bird conservation became really important to me.” Mancuso now works as a wildlife biologist with the Okanagan Nation Alliance, where she tracks animals for a living, continuing the professional version of her childhood experiments. While the science is still important to Mancuso, she also sees connecting people as a vital component of conservation.

Similar to the Migratory Bird Initiative, to which Mancuso is a data contributor, she hopes that migration research will continue to narrow the gaps not only in our knowledge of bird migration, but also between the people on which birds depend. “There are cultural barriers that we need to start bridging if we’re going to be on the same page for wildlife conservation. It’s been really enriching to engage with other cultures, while being connected by these birds.”