How and Why Did Bird Migration Evolve? 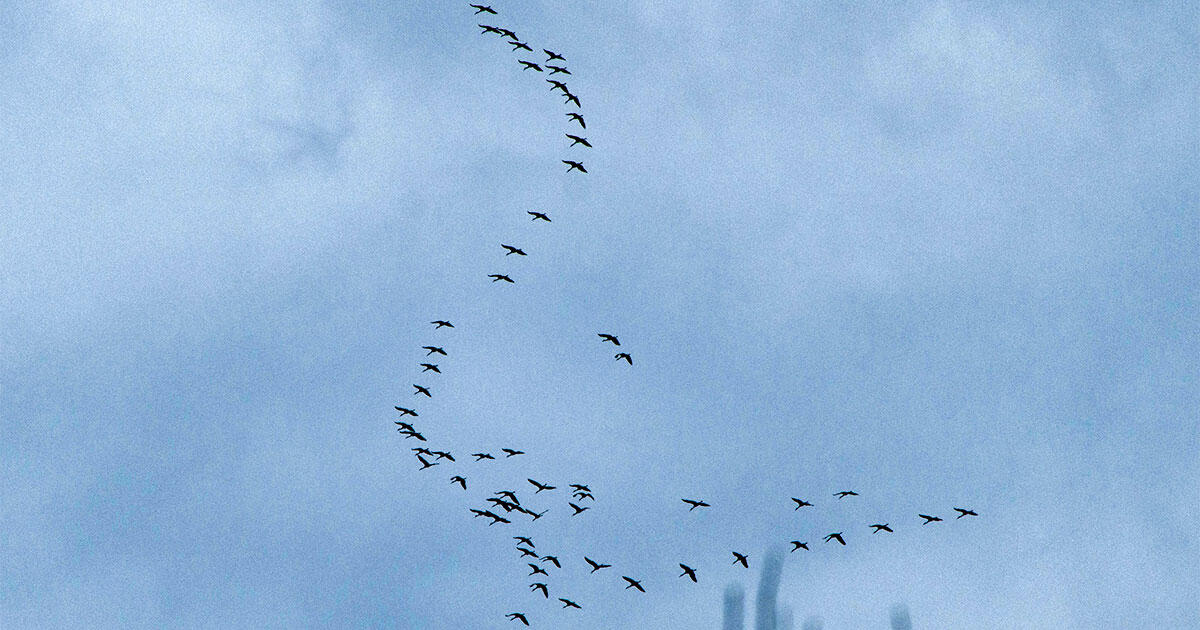 As spring unfolds in North America, the days lengthen and warm, flowers push out of thawing soils, and green leaves bud on branches. Bees get busy, and birds court mates, build nests, and raise young. As any winter-hardened birder knows, many of those birds have been absent, passing harsh, cold northern months in warmer southern climates. Some have flown thousands of miles to arrive to their breeding grounds in the same place, at about the same time, as last spring and the spring before that.

Why birds undertake these seasonal journeys seems at first intuitive: They seek to improve their chances, and their offspring’s chances, of survival. But how bird migration at first evolved has, in fact, long been a topic that scientists have debated.

Researchers don’t know enough about ancient birds and their closest relatives from many millions of years ago to determine when the first avian ancestors began migrating. Existing evidence goes back at least hundreds of thousands of years. Genetic studies, for example, suggest that Galápagos Hawks diverged from Swainson’s Hawks between 125,000 and 250,000 years ago, when Swainson’s Hawks may have gotten sidetracked from their migration journey. But tracing bird migration deeper in time has not yet been possible. In reality, bird migration could be much older.

“When we talk about the evolution of migration in modern times, we’re really talking about the modification of that ancient trait or, likely, set of traits,” says Robert Zink, an avian evolutionary biologist at the University of Nebraska. A range of creatures, such as squids, butterflies, and reindeer, have evolved migration behaviors, Zink says, and this suggests migration is a basic response to take advantage of seasonal resources. In other words, it might be more surprising if birds, with their powers of flight, didn’t migrate.

“The reality is birds are everywhere, and they adapt to their current conditions.”

For decades, the debate around how birds first started migrating centered around the “southern home” versus the “northern home” hypotheses. These ideas essentially suggest that modern-day migratory species originally lived in either tropical (a southern home) or temperate regions (a northern home) and gradually evolved to travel between the two climates to take advantage of food, escape competition, or breed in places with comparatively fewer predators. From whichever direction migrants originated, birds with access to better resources more successfully survived and reproduced, passing down to descendants the drive to travel.

More recently, some researchers have looked at migration slightly differently. By tracing evolutionary relationships between species and examining modern breeding biology, ornithologist Benjamin Winger theorizes that migration is closely tied to seasons—regardless of geography or the latitude from which a species originates.

“The reality is birds are everywhere, and they adapt to their current conditions,” says Winger, who studies avian migration and dispersal at the University of Michigan. In this view, birds migrate to escape dangerous environments that jeopardize survival—not much different than hibernation in bears or diapause in insects. “To live at these high latitude places, [birds] basically have to be migratory,” he says. (Evolution always offers exceptions, however. Ptarmigans, which burrow in winter, are among the few birds that live at far northern latitudes year-round).

Framed this way, flying south to flee winter—when there is little food available—would only be one example of why birds migrate. The theory also extends to birds that migrate up and down mountains, or within tropical areas, to follow seasonal rainfall, temperature, and other environmental patterns.

Of course, fleeing difficult conditions can’t be the full story of migration: “The tricky part of this has been explaining why they come back the next year,” Winger says. To this, he says, birds—like many organisms—prefer to be in the places they were born. “The thing that drives them back is essentially the advantage of returning to a familiar breeding location,” he says.

A bird’s migratory distance may also relate to the reproductive strategy it has evolved. According to Winger’s work, a long-distance migrant like the Swainson’s Thrush produces fewer offspring than Hermit Thrush, which doesn’t travel as far. Surprisingly, adult Swainson’s Thrushes have better survival rates, despite their arduous journeys. Similar evolutionary tradeoffs between producing fewer offspring that survive longer, like an elephant, or more offspring that die sooner, like a mouse, are seen throughout the animal kingdom. This data show that long-distance avian migrants may be more similar to an elephant than mouse. “Essentially, migration promotes this higher survival, lower reproductive output strategy,” Winger says.

“The tricky part of this has been explaining why they come back the next year.”

However migration first evolved, the drive for modern birds to migrate is at least partly genetic, says Kristen Ruegg, a researcher at Colorado State University and leader of the Bird Genoscape Project. In cross-breeding experiments, for example, scientists breed a bird (like a Eurasian Blackcap) that migrates a long distance in one direction with another bird (like a Eurasian Blackcap from a different population) that migrates a short distance in a different direction. Consistently, the offspring will try to migrate an intermediate distance and in an intermediate direction.

These results show that migratory patterns can be passed down or modified across generations. But understanding which specific genes are responsible has “been a lot harder than you would think,” Ruegg says.

Avian researchers are also seeking to better understand how genes encode for migratory timing. All animals have internal clocks that respond to environmental cues such as light, temperature, or stress. These clocks are responsible for the circadian rhythms that humans experience on a 24-hour cycle, for example. In birds, unlocking the genetic material that controls these clocks could shed light on how and why migration evolved, says Ruegg.

Other genetic questions remain. For example, not all birds are migratory. Scientists think these species still have all those genes but that they are just switched off. But this is not certain, says Winger.

How quickly migratory traits can evolve over generations is another important question in this time of rapid climate and environmental change. That fact that birds breeding in North America have adapted to the advance and retreat of glaciers over the last million years is a clue that migratory behavior is flexible, says Zink. Researchers have even documented Eurasian Blackcaps and House Finches developing new migratory patterns within a few generations. But that doesn’t mean all birds can or will adjust so quickly.

Much of this research is academic and nuanced. And as millions of birds travel this spring, their feats may seem near impossible to casual observers who contemplate them. But it’s helpful to remember: For the birds, it’s not so remarkable—it’s simply how they’ve evolved to survive.