Helping to Reveal a Still-Shuttered World 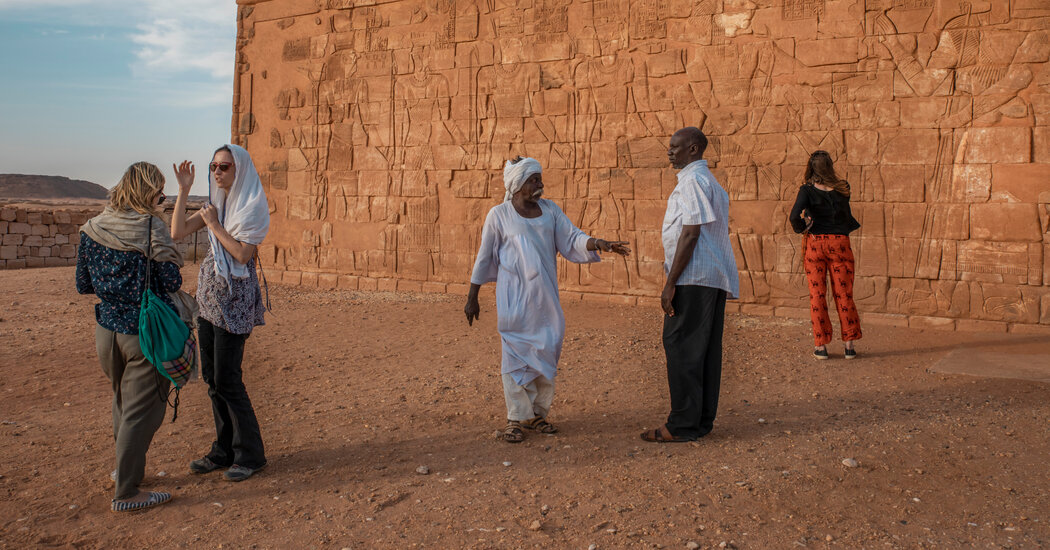 In March 2020, as lockdowns fell into place worldwide, The Times’s Travel desk launched a new visual series to help readers cope with their confinement. We called it The World Through a Lens — and, frankly, we didn’t expect it to last this long.

But as the weeks turned into months, and the months into years, we’ve continued publishing photo essays each Monday morning, carrying you — virtually — from the islands of Maine to the synagogues of Myanmar, and nearly 100 other places in between.

We hope the series has offered you a little solace and a little distraction throughout the pandemic — and perhaps a chance to immerse yourself, if momentarily, in a distant place or culture that may have otherwise gone unnoticed.

Below are some of our favorite World Through a Lens essays from the past year.

For Christopher Miller, a photographer based in Juneau, Alaska, two roads — the Glenn Highway and the Richardson Highway — formed the backbone of a stunning late-spring road trip. And instead of sacrificing comfort, he traveled in style: in an R.V., the quintessentially American automobile.

“I gazed out the window at the late-spring flora, which hemmed the Matanuska River Valley, until a jolt in the road brought me back to my reality: I was hurtling down the road, lurching and swaying with the equivalent of an efficiency apartment as a back-seat passenger.”

Read more about R.V. life on the Alaskan highway →

Between 2014 and 2020, Frank Herfort visited more than 770 Soviet-era metro stations — including stations in Russia, Ukraine, Belarus, Azerbaijan, Georgia, Armenia and Uzbekistan. He also visited a handful of cities whose metro systems, while not formally attributed to the Soviet Union, were either built or substantially altered during the Soviet era, including the metro stations in Bucharest, Budapest and Prague.

His goal? To create as close to a full archive of the metros as he possibly could.

On the Isthmus of Tehuantepec in southern Mexico, the local Zapotec community has long accepted — and celebrated — a group of people known as muxes, who are born male but who adopt roles and identities associated with women.

The photographer Núria López Torres first learned about Mexico’s muxes, who are broadly considered a third gender, after working on a series of projects about gender identity in Cuba and Brazil.

In 2020, Roff Smith, a travel photographer grounded by the pandemic, began to bring a camera and tripod with him on his morning bicycle rides, shooting them as though they were magazine assignments.

What began as simply something to do — a challenge to try to see his familiar surroundings through fresh eyes — soon blossomed into a celebration of traveling close to home.

For more than 15 years, the geologist and photographer Jason Gulley has explored and mapped glacier caves from Nepal to Greenland, venturing into vast, icy labyrinths to study their relationships with glacial melting and climate change.

Among his findings: Rising temperatures are forming caves inside glaciers in the Everest region of Nepal that are rotting the glaciers from the inside out.

In the Brazilian city of Olinda, a group of thrill seekers took up an illegal and death-defying hobby: riding on the outside of public buses.

The photographer Victor Moriyama first learned of the pastime via a video posted to Facebook. Within an hour, he was exchanging messages with the surfers and planning his trip to Olinda.

“During my weeklong visit with the bus surfers in 2017, I felt happy and free. In a way, they allowed me to revisit my own roots: During my teenage years, growing up in São Paulo, I, too, engaged in certain risky and transgressive behavior.”

After a chance encounter in Olympos piqued his interest in traditional Greek clothing, the photographer George Tatakis decided to make a project of exploring the unseen corners of his country — to meet the people, learn about their traditional practices and make images along the way.

“To me, photography is about much more than just the images themselves. I have a passion for rural Greece, and I enjoy exploring the concept of xenia, or hospitality — a central virtue that can be traced back to ancient Greece.”

For centuries, the archipelago of St. Kilda, one of the most remote and unforgiving outposts in the British Isles, has electrified the imaginations of writers, historians, artists, scientists and adventurers. Its tantalizing history is replete with a rich cultural heritage, distinctive architecture and haunting isolation — not to mention disease, famine and exile.

When Stephen Hiltner, an editor on the Travel desk, visited the archipelago with his brother and sister, the 85-mile boat ride through rough seas left some passengers huddling in discomfort. But the windswept scenery was otherworldly.

Emerging like a mirage from their surroundings, the San Pedro Community Gardens have for decades provided physical and spiritual nourishment to multiple generations of immigrant Angelenos.

When the photographer Stella Kalinina discovered the gardens in 2019, she instantly connected with the expressions of longing for ancestral lands.

“As a Russian-Ukrainian American who moved to the United States as a teenager and later married a second-generation Mexican American, I find myself drawn to stories of migration, severed connections, longing for one’s culture and the making of new homes.”

In 1986, when he was 12 years old, Joel Carillet — whose family had moved to Papua New Guinea to work with a Bible-translation organization — visited the site of a World War II plane that crashed in the jungle near the village of Likan.

His return, some 33 years later, prompted a series of reflections on the various ways that the site — and his experiences in Papua New Guinea as a child — shaped him, then and now.

The dense metropolis of Kolkata is among the only places in India — and one of the few left in the world — where fleets of hand-pulled rickshaws still ply the streets. The men who operate them are called rickshaw wallahs; some pull their rickshaws more than 10 miles a day while carrying several hundred pounds.

The photographer Emilienne Malfatto documented the men and their work while on a scholarship for a photography workshop.

“Rickshaw wallahs don’t earn a living serving tourists. Their clientele consists mainly of local Kolkatans: shoppers coming to and from markets, or residents transiting the city’s narrow side streets.”

Driven by his interest in the cultures and traditions of his home state of Kentucky, Luke Sharrett photographed his first tobacco harvest eight years ago. Each year since then, he has eagerly returned.

At Tucker Farms in Shelby County, 25 men from Nicaragua and one from Mexico perform the grueling seasonal work that Americans largely avoid. The labor is physical, repetitive and exhausting. Long days are punctuated by a few short breaks and a lunch of home-cooked beans and rice.

Deep in the Altai Mountains, where Russia, China, Kazakhstan and Mongolia meet, Kazakh people have for centuries developed and nurtured a special bond with golden eagles.

In October 2019, after living and working in northern Iraq for almost three years, the photographer Claire Thomas began working on a personal photography project that drew on her background and affinity with horses.

To start, she flew to western Mongolia to meet and photograph the iconic Kazakh hunters, horsemen and animal herders.

“Outwardly, documenting the traditional ways of life in western Mongolia stands in stark contrast to my time spent photographing scenes of conflict and suffering in Iraq. But the two subjects share a common theme: the human struggle not just to survive, but to build a better future for oneself and one’s family.”

Throughout the 30-year dictatorship of Omar Hassan al-Bashir, who led Sudan through a long series of wars and famines, the pyramids of Meroe saw few international visitors and remained relatively unknown.

But after the revolution that led to Mr. al-Bashir’s ouster in 2019 and the removal of Sudan from the United States’ list of state sponsors of terrorism, the country’s archaeological sites were finally poised to receive broader attention and protections.

In early 2020, the photographer Alessio Mamo traveled to Sudan to visit the ancient city of Meroe, whose pyramids were built between 2,700 and 2,300 years ago.