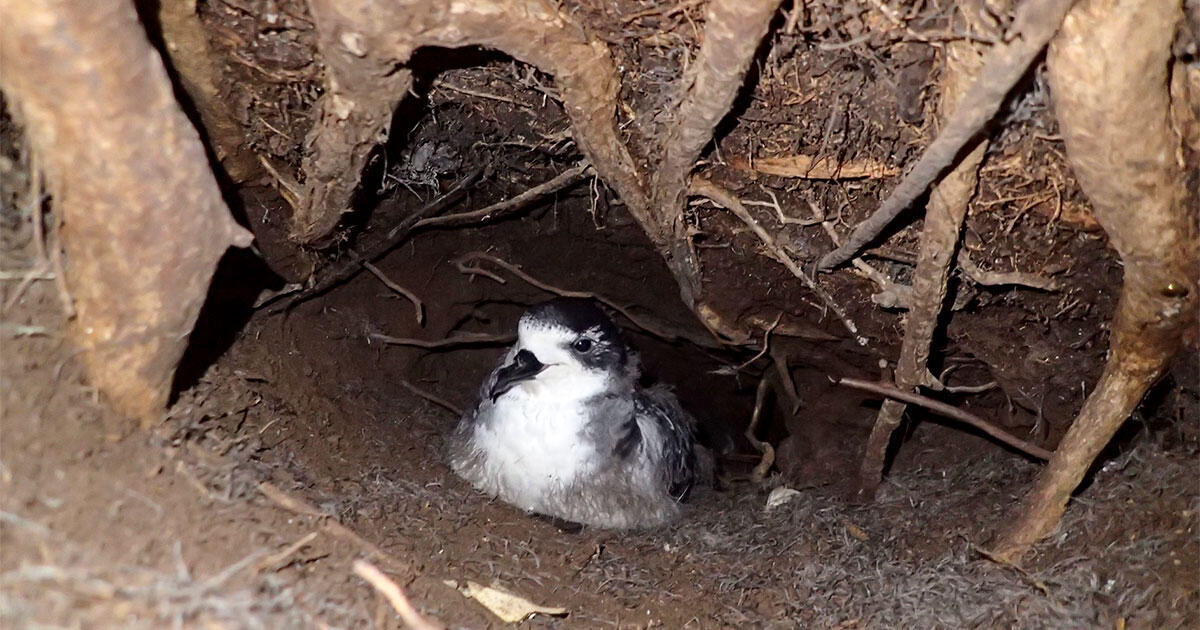 If only seabirds could catch a break from the gauntlet of threats they face worldwide. Across the globe, the birds are imperiled by everything from power lines and light pollution to plastics and longlines on fishing trawlers. In many cases, their important fish prey are being depleted or moving due to warming waters. Meanwhile, feral rodents, pigs, and cats have decimated their populations. And now, according to new research, there is another threat to add to the list: honey bees.

Ongoing monitoring efforts on the Hawaiian archipelago have revealed that invasive honey bees on the islands of Kaua‘i, Lana‘i, and Hawai‘i not only kill chicks, but adult seabirds, too. Biologists documented the first invasion of an Ua‘u (Hawaiian Petrel) nest in the remote, rugged terrain of Kaua‘i in 2013, but the number of nests overtaken by bees has increased and now also affects ‘A‘o (Newell’s Shearwater).

“It’s an irony, because bees are doing terribly,” says seabird biologist André Raine, science director of Archipelago Research and Conservation, and the lead researcher who recorded the first bee invasion. “But we are dealing with something that’s not meant to be here, and it could have a major impact on something that’s clinging to existence on this island that has nowhere else to go.”

Native to Europe, western honey bees were brought over to the Hawaiian archipelago in the 1800s to produce honey and help pollinate new, non-native crops. Still managed today for agriculture and the honey industry, these domesticated bees can split from a hive—a queen and some of the workers will leave—and form new, feral hives in tree stumps and, apparently, even seabird burrows.

Native seabirds like the ‘A‘o and Ua‘u once lived widely across the Hawaiian archipelago, in large numbers that darkened the skies, according to native Hawaiians. Their populations precariously dipped in recent decades due to urbanization, habitat degradation, and invasive species, with the ‘A‘o declining by 94 percent and the Ua‘u by 78 percent. The mountainous terrain of Kaua‘i hosts the majority of the ‘A‘o population, highlighting the need for quick action when an invasive species strikes.

These cameras were instrumental in allowing Raine to witness the first bee invasion and document the recent uptick in bee takeovers in the past few years. The footage shows that bees can invade active burrows in less than two hours, mainly during the warmer months of April to October. Aggressively swarming the entrance, the bees will sting any resident adult seabird fleeing the burrow or trying re-enter. “If there’s a bird inside, it’s in serious trouble,” Raine says.

While feral bees have also been identified as threats to seabirds on Lana‘i, and Hawai‘i, they currently appear to pose the biggest risk on Kaua‘i. So far, bees have taken over 10 burrows on the island, killing two chicks and causing parents to abandon an egg. At two Ua‘u nests, bees killed both parents. Finding dead birds covered in bee stings—including on their eyes—outside a burrow “paints a really dramatic picture,” says Alex Dutcher, co-owner of Hallux Ecosystem Restoration, which performs predator control to support seabirds on Kaua‘i. “Any predator that’s killing adult seabirds has the potential to have a serious impact on the population,” she says.

So far, bees have taken over 10 burrows on the island, killing two chicks and causing parents to abandon an egg.

Generally, seabirds can live for decades and raise just one or two chicks per year, meaning that any adult loss has cascading effects on a species.“Seabirds are globally one of the most threatened taxa,” says Holly Jones, a conservation biologist at Northern Illinois University who studies this vulnerable group of birds. “They’re getting hit in all directions. But very clearly, invasive species on islands are the top threats to seabirds.”

Although a relatively new risk to Hawaiian seabirds, feral bees have invaded cockatoo nesting hollows for decades in southwestern Australia. Not only do the bees compete with the threatened cockatoos for limited nesting space, but they also kill vulnerable nestlings. Tree cavities share characteristics with seabird burrows: They block the wind and have cooler temperatures and more consistent humidity compared with other spaces. “The microclimate is probably important to them,” says Christine Groom, a biologist at Western Australia University who studies the endangered Carnaby’s Cockatoo.

In Australia, attempts to eradicate the bees by mixing pesticide with a sugary syrup at strategically placed bee-feeding stations—worker bees carry the pesticide-laced food back to the hive, killing the colony—were somewhat successful, but the program received push back from the local honey industry. “Bees are really important for pollinating crops,” Groom says. “But where there’s that conflict with the wildlife, especially in this case, an endangered species, it can be a problem.”

On Kaua‘i and other islands, predator control—dropping poison or trapping animals—and fences have been highly effective at reducing seabird losses to mammal predation. “But you can’t put up a fence that will keep bees out,” says Kyle Pias, biologist and co-owner of Hallux Ecosystem Restoration. Instead, Pias and Dutcher collaborate with Raine to remove the bees with a handheld and battery-operated vacuum they designed to tote into the remote, mountainous terrain of Kaua‘i.

The bee vacuum’s long hose helps the crew member—wearing a bee suit for protection—reach the far back of the deep burrow. The live bees go into an attached container, allowing for humane removal from the site. Video: Courtesy of Kyle Pias

During the first few removals, the team didn’t use smoke to calm the hives because of potential fire danger in the preserved area. They quickly learned their lesson: The bees “want nothing more than to destroy you,” Dutcher says. Now, wearing long pants and long-sleeve shirts under a full-body bee suit, Dutcher and Pias vacuum smoked bees out of the hive and trap them live inside an attached container.  “The sweatiest I’ve ever been in my entire life is doing the bee work,” Dutcher says.

After removing the bees and their sticky honeycomb, the team flies the whole hive by helicopter to local beekeepers in Kaua‘i. While this poses its own dangers—Raine, the pilot, and several crew are allergic to bee stings and carry EpiPens—they prefer to remove the bees as humanely as possible.

The team is currently pursuing preventative solutions to thwart more bee-attributed seabird deaths. When they find hives near seabird burrows—sometimes hosting as many as 20,000 bees—they attempt to remove them. However, the remote, high-elevation terrain of Kaua‘i makes removal an arduous task. Next, the biologists plan to test bee swarm traps laced with pheromones, which will attract and capture bees before they invade a burrow.

How prevalent these feral bee hives are on Kaua‘i is unclear. Unlike mammalian predators that may leave clues to how they access an area or reveal their numbers—feral pigs destroy vegetation, and rats may leave footprints, for example—bees are more elusive, raising concerns about there being a large feral bee population on Kaua‘i. “In the grand scheme of things, right now, [bees are] a minor threat,” Raine says. However, climate change could exacerbate the threat.

Climate models predict higher temperatures for upper elevations of Kaua‘i, allowing honey bees to access more of these vulnerable seabird colonies. Similarly, in other Hawaiian islands, warming has facilitated mosquitoes ascending remote mountain peaks and spreading avian malaria, ravaging the endemic songbird populations. Warmer temperatures also cause the beehives to split more frequently and search for new homes, potentially leading to an increase in burrow invasions. “We could be on the cusp of quite a big issue,” Raine says.