Feeding Birds Could Get Pricey This Year 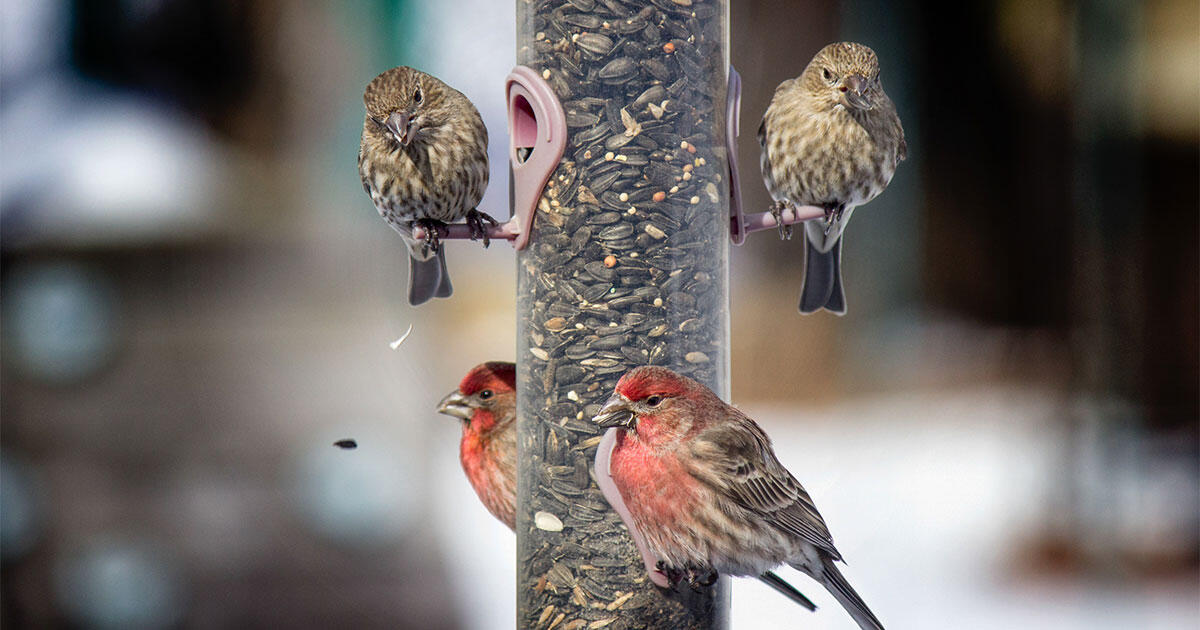 For millions of Americans who feed wild birds, the enjoyment they get from nourishing and observing avian visitors is well worth the cost of providing a steady food supply.

This year, though, that cost is on track to be especially high.

One big reason: Areas that grow the grains and seeds in bird food mixes are among those hardest hit by the drought parching half the country. Experts anticipate significantly diminished harvests of bird-feeding staples sunflower, safflower, and millet this fall. Combined with other factors like high shipping costs and rising demand as birding grows in popularity, the severe, persistent drought could force households to reassess their bird-feeding budgets.

The federal government’s latest drought map shows vast areas of the West and the Great Plains in extreme or exceptional drought, its most severe categories, both of which can lead to massive crop failures. Drought is nothing new for these regions, but scientists say climate change is making this one especially potent. Reservoirs and wells are running dry. Wildfires are burning through desiccated forests and grasslands from Southern California to Northern Minnesota. Farmers are selling off cattle they can’t afford to water and feed.

Harvest is still a few weeks off for many of the crops used to feed birds, but the drought’s impact on the nearly complete wheat harvest signals trouble ahead. In North Dakota, the top producer of the spring wheat used in bread and other baked goods, the yield is on average down about 40 percent from last year, according to Frayne Olson, crop economist and marketing specialist with North Dakota State University Extension. “There are some farmers who have literally abandoned their crops and aren’t going to harvest them,” he says.

Olson says he expects sunflower yields in North Dakota—the top sunflower-producing state in 2020—to take a similar 40 to 50 percent blow. Experts say sunflower seeds attract a greater variety of birds than other foods, making the crop a staple of many seed mixtures. Bird feeding represents about half of the market for sunflower growers, says John Sandbakken, executive director of the National Sunflower Association.

Sunflowers have deep taproots that can usually find some water even when the ground is dry, making them drought-resistant—but only up to a point. “We’re experiencing drought conditions that we’ve not seen in the High Plains since the 1930s,” Sandbakken says. Only 1 percent of the crop in North Dakota is in excellent condition, while 41 percent is poor or very poor, according to the latest weekly report from Sandbakken’s group. “My thought is, given how dry it is in the key production areas, we are going to see a lower yield than we did last year,” he says.

Not only is the drought squeezing per-acre production, there was also less acreage to begin with; farmers planted about one-quarter fewer acres in sunflowers this year than last, instead sowing more soybeans and other commodities that had higher prices at planting time. While this year’s crop is still in the fields—farmers typically harvest sunflowers around the start of October, but might do so a couple of weeks earlier given this year’s drought—prices are already climbing. As of last week, Olson says, farmers could expect to be paid $31.40 per hundred pounds of oil seed sunflower, which is more commonly used in bird seed mixes than the striped sunflower seeds you’d buy at the ballpark. At the same time last year, the price was $16.60.

“We’re going to have some very tight supplies, especially for oil seed sunflower,” Olson says. As a result, the price of a bag of sunflower seeds will go up, “for sure,” he adds. Bird feed mixes, too, will almost certainly be more expensive than usual, and “you might see less sunflower than you normally would” in those blends.

The drought will also hurt the harvest of other major ingredients in bird seed mixes, Olson says. That includes safflower, which comes largely from California, North Dakota, Montana, and other states that are exceptionally dry this year. It also includes millet, of which Colorado is the top-producing state. The state’s eastern millet-growing region started the season with plenty of moisture, but it’s been a dry summer and the harvest will suffer, pushing prices upward, says Ron Meyer, a Colorado State University Extension agent and agronomist. “Both sunflower and millet are up substantially in price at the farm level, and that will transfer to retail,” he says.

The effects of diminished yields will pile on top of already high prices.

The effects of those diminished yields will pile on top of already high prices. Confined by coronavirus lockdowns, many people turned to feeding birds as a source of comfort and entertainment. Retailers have struggled to keep shelves stocked. That surge in demand, along with a spike in freight costs, drove up the price of bird food.

Before the pandemic, in August 2019, the Wild Bird Habitat Store in Lincoln, Nebraska was paying its distributor a wholesale price of $7.60 for a 25-pound bag of black oil sunflower seeds. Today the same bag costs $11.50, says Dave Titterington, the company’s founder and executive officer. In that same time, the wholesale price for 50 pounds of white safflower rose nearly 60 percent, from $21.15 to $33.80, and for a type of millet called white proso it more than doubled, from $12.50 to $28.05. “From what I’m hearing,” he says, “they’re just going to keep going up.”

Not long ago a shopper in Titterington’s store said she could feed a family of four with the money she spends on bird food. He’s reduced the store’s markup on bird seed “just to keep people from freaking out,” and it’s begun cutting into the bottom line. He fears he could lose customers to stores that sell less expensive but lower-quality mixes stuffed with cheap ingredients that birds don’t even eat. “My big concern is where the cutoff is going to be for the consumer when prices get to a point where they just say, no more, or they start cutting back,” he says.

With colder months approaching—and with the disease outbreak that prompted orders to take down bird feeders now apparently under control—there’s no reason to expect prices to go anywhere but up in the near term. And given that pandemic-charged prices remain stubbornly high for goods from lumber to computer chips, nobody knows when the cost of bird seed will come down. In the meantime, for those looking to feed their backyard visitors on the cheap, it’s a great time to grow some bird-friendly native plants.