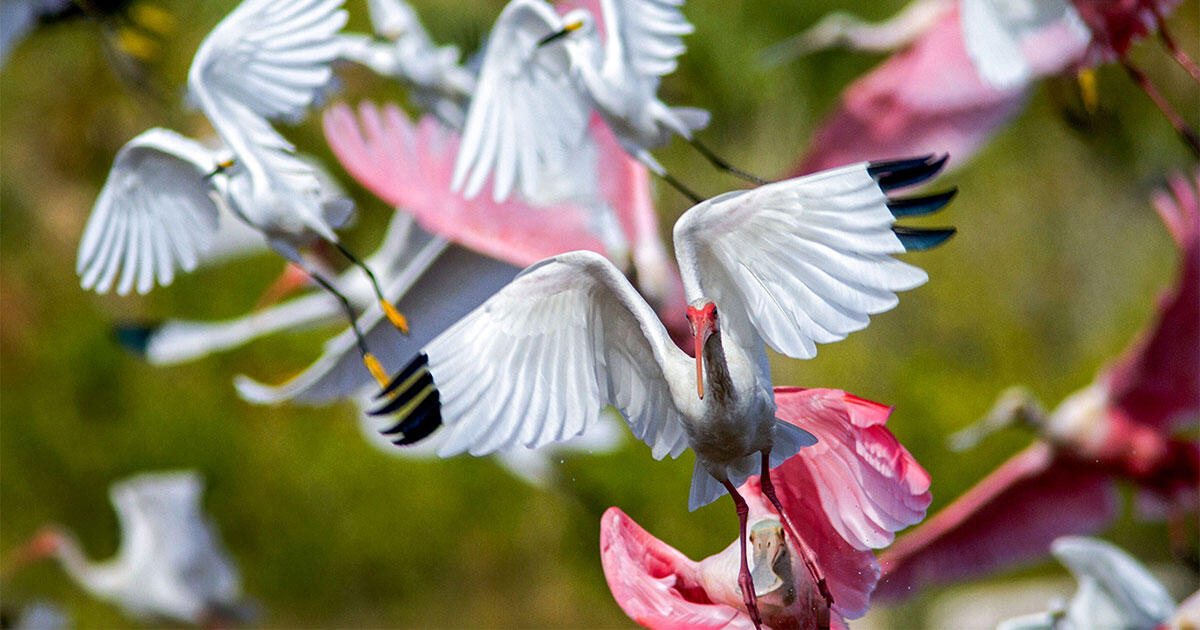 Who's Kenn? Simply put, Kenn is a national treasure. A renowned birder, author, and conservationist, Kenn Kaufman has spent his life dedicated to observing birds, reading about birds, writing about birds, and sharing the world of birds with others. With all that birdy knowledge in his brain, he also acts as the field editor for Audubon magazine. So, whenever we have a bird question stumping us around the office, we just ask Kenn. And now you can, too! If you have a bird or birding question you'd like Kenn to answer, leave them in the comments below or on Facebook. Maybe next month you'll get the kind of thorough, thoughtful, and even humorous response from Kenn we've grown so fond of over the years. —The Editors

Q: I recently tried to explain to a friend what technically makes a heron different from an egret, and I realized I have no idea. What is the difference? And what about other wading birds like ibises, and storks, and flamingos?

Kenn Kaufman: Once when I was an avid pre-teen birder, I got in a big argument over birds and words. Some distant cousins spotted a Great Blue Heron, but they called it a “crane.” Puffed up with self-important knowledge, I informed them that cranes were different from herons—not even related. The argument escalated into a shouting match until a nearby adult shut us down: “Crane, heron, stork, whatever, don’t make no difference. They’re all just different words for the same darned bird.”

Technically, of course, that isn’t true. Anyone can look at the long-legged wading birds and see their wide variety of shapes, sizes, markings, and colors, making it obvious that they are not all the same thing. They represent many different species. But how closely related are they? That question has sparked a considerable amount of debate—not as noisy as my boyhood argument with my cousins, perhaps, but still intense—for many years. As scientists have developed better tools and methods for studying the relationships of living things, they have found that the wading birds separate out naturally into some very distinct groups.

The overall framework for how we classify birds has not changed much for a long time, and you may have memorized it in high school biology. The class Aves is divided into a number of orders of birds. Each order contains one or more families. Within each family there may be one genus or more (plural: genera), and each genus includes one or more species. Some intermediate categories are sometimes used, such as subfamily and subgenus. But for a basic understanding of bird classification, it’s enough to consider orders, families, genera, and species.

Although the framework of the classification has not changed much, the arrangement of various kinds of birds within the system has changed radically over time. All of the long-legged wading birds were once classified in the same order. Now they are spread out across four separate orders, none of them particularly close to the others.

Our modern system of classification and scientific names for birds and other animals dates back to 1758, when Carolus Linnaeus published the 10th edition of his Systema Naturae. Linnaeus was a brilliant innovator, but at that time, scientists had no good means of judging whether species were related, other than sheer superficial similarity. So it’s not surprising that Linnaeus classified flamingos, spoonbills, ibises, herons, storks, and cranes all in the same order. (In fact, that order, which he called Grallae, also included the sandpipers, plovers, oystercatchers, rails, and even ostriches.) Apparently, longish legs were practically the only qualification needed for membership in this group.

It’s fascinating to look back on how Linnaeus grouped some of the birds in his initial list. Shrikes, those predatory songbirds, were placed in the same order as the owls, hawks, and falcons. Ducks, auks, grebes, albatrosses, gulls, and penguins all shared an order. Among the long-legged waders in Linnaeus’s order Grallae, ibises were grouped in with some of the longer-billed species of sandpipers. Not only were cranes included in this order, they were even placed in the same genus as the Great Blue Heron, which no doubt would have pleased my argumentative cousins.

At the time, structural similarity was taken as a sign of relatedness. This was long before anyone explored the idea of convergent evolution—the idea that unrelated forms could develop the same adaptations to a particular habitat or lifestyle. We know now that things like bill shape and leg length can readily evolve—over vast periods of time, of course—to better suit certain food sources or feeding behaviors, and that unrelated birds can wind up with similar shapes as a result. Indeed, as we have learned, something like this has happened many times among the wading birds. While bill shapes may be somewhat consistent within a family, leg length doesn’t really indicate anything useful for classification.

By the time of the first bird checklist of the American Ornithologists’ Union (AOU), published in 1886, scientists had begun to look much more critically at the relationships of all these groups. For example, they had separated the flamingos out into their own order. That isn’t surprising; if we look closely at flamingos, they are strange birds, and their flamboyant color is hardly the most unusual thing about them. Wading in the shallows on incredibly long, thin legs, they lower their necks to submerge their heads upside down in the water. Opening their bills slightly, they use their fleshy tongues to pump water through the gap, and small comb-like structures on their mandibles filter out food from the water: the tiniest crustaceans, insects, mollusks, algae, and other plankton. Flamingos sometimes forage in the same waters as herons or storks, but they are feeding on much smaller prey.

Their distinctive diet means that flamingos can be abundant at extremely salty lakes that support few other birds. Some flamingo nesting colonies hold up to half a million pairs, each pair tending a single egg in a nest that looks like a raised cone of mud. Scientists puzzled for years over the classification of flamingos; recent molecular evidence suggests they may be most closely related to grebes, even though they look utterly different from those pudgy, short-winged divers. Appearances can be deceiving!

Until recently the storks, herons, ibises, and spoonbills were all still placed in the same order.

That first AOU checklist also classified the cranes in a separate order from the herons, ibises, and storks. Cranes may look similar to herons, but they are omnivores, feeding on a wide variety of plant material and small animal life, while herons are almost entirely predatory. Many cranes have loud, bugling calls, while the voices of herons tend more toward harsh squawks. Cranes typically place their nests on the ground, while most herons build nests up in trees or tall marsh vegetation. Herons often nest in dense colonies but then spread out to feed as solitary individuals, while cranes often spread out to nest in isolated pairs but come together in flocks for foraging. Cranes are still classified in the same order as rails and some other families (including the long-legged Limpkin of our southeastern states), but not with other waders considered here. These birds were first separated out from the herons and others on the basis of internal details, including the structure of the skeleton, and more recent studies with genetics have confirmed that diagnosis.

Until very recently the storks, herons, ibises, and spoonbills were all still placed in the same order. But molecular studies since the late 1990s had repeatedly suggested that the storks were more distinct, and in 2010 the AOU officially separated them out into an order by themselves. The world’s 19 species of storks all have huge bills. Many of them forage in shallow water by touch, holding their bills slightly open as they feel for prey below the surface. Others may be predatory on small animals in dry open ground, and they may feed at carrion with vultures. Like vultures, and unlike most of the other long-legged wading birds, storks may soar for hours on their broad wings.

After all this splitting, the ibises and spoonbills (family Threskiornithidae) are still classified in the same order as the herons. The 30 species of ibises all have curved bills. Most of them do much of their feeding by wading in shallow water, probing in the mud at the bottom. The six species of spoonbills sweep their spatulate bills back and forth through the water, feeling for prey. Despite their different bill shapes and feeding behaviors, their other habits tend to be similar.

The largest family considered here is the Ardeidae, the herons, egrets, and bitterns, with almost 70 species worldwide. These include the large, long-legged birds of the water’s edge, familiar to people all over North America, even if many (like my cousins) call them cranes instead. Within this family there are some subgroups that seem distinct. For example, the bitterns (including large species in the genus Botaurus, like the American Bittern, and small ones in the genus Ixobrychus, like the Least Bittern) are solitary marsh-dwellers with notable voices. The night-herons, true to their name, are often most active at night, when other herons are roosting.

But when it comes to the difference between herons and egrets—well, those really are just different words for the same darned birds. There isn’t any taxonomic difference. We can see that by looking at some examples. The Great Egret is more closely related to the Great Blue Heron than it is to other birds with “egret” in their names. The Snowy Egret and Reddish Egret are in the same genus as the Little Blue Heron and Tricolored Heron, while the Cattle Egret is classified in a genus by itself. The Western Reef-Heron is a very close relative of the Little Egret. We tend to use “egret” for the white species and “heron” for those that are darker, but there are many exceptions to that rule—including the fact that the Great Blue Heron itself has a white subspecies, sometimes called “Great White Heron,” living mainly in Florida and the Caribbean.

In the end, do words for birds matter? Sometimes. If someone appreciates the beauty of a Great Blue Heron enough that they want to protect the bird and its habitat, it no longer bothers me if they call it a “crane.” The appreciation and the caring are more important. But for those who want to learn more about birds, it’s fascinating to consider all the distinctly different kinds we might see walking along the water’s edge.