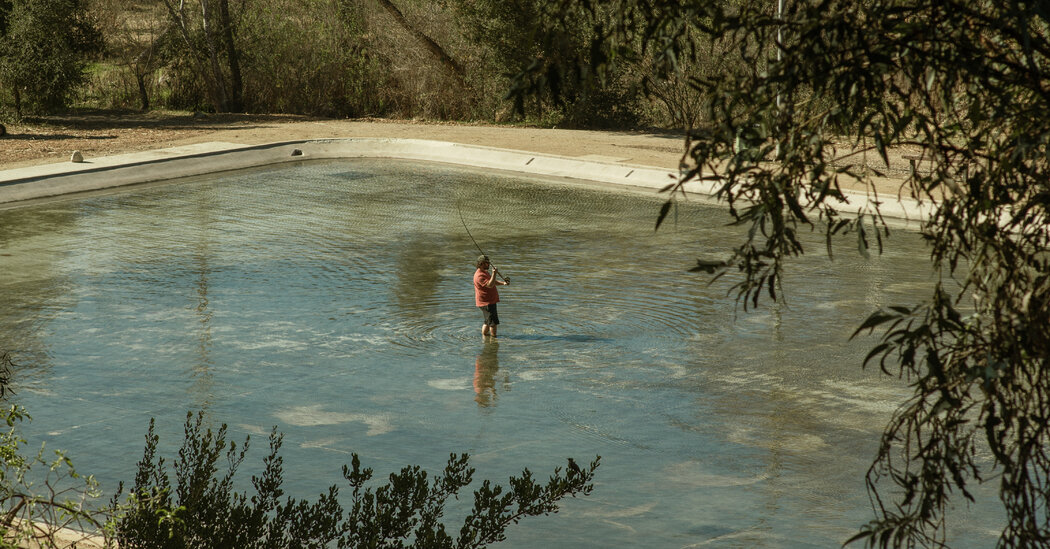 It’s hard to imagine there was ever a time when the Los Angeles River was wild and free flowing, flanked by thick reed forests and full of steelhead trout — instead of clad in concrete and sandwiched between swollen expressways and freight-train tracks.

Centuries ago, in the areas that are now the back sides of strip malls and housing developments, the native Tongva people lived in villages along the river and relied on fishing for food. After the Spanish colonists arrived in 1781, the population grew along the banks of the river, which served as the primary water source for the Pueblo de los Ángeles.

Rains often turned the flow of the river from a trickle to a torrent in just a few hours, which made flooding a recurring problem. Following a catastrophic flood in 1938 that destroyed thousands of homes and killed almost 100 people, the Army Corps of Engineers decided that the best solution was to channelize 278 miles of the river and its tributaries — including the 51-mile stretch from Canoga Park to Long Beach — with concrete embankments.

Today, the waterway is more reminiscent of an oversize storm drain than a river, with just a slow trickle of water flowing down the center of the concrete-lined channel. The images it conjures for most people are the settings featured in famous movie scenes, like “Grease” or “Terminator 2: Judgment Day.”

But tucked in a little corner of Los Angeles, underneath the intersection of two highways, lies a neighborhood known as Frogtown — along with a small and lush section of the Los Angeles River.

This pocket, called the Glendale Narrows, never had its bottom paved over, which has allowed trees and river plants to continue growing in its center, where the water flows through.

Like the coyotes that live amid the homes and vacant lots on neighboring hills, many aquatic birds and fish have made this section of the river their habitat. While hardly reminiscent of the untamed river from earlier centuries, this section of the river today feels like a natural respite from the surrounding urban environment, even if there appears to be an equal amount of both litter and vegetation.

I found myself spending a lot of time at this section of the river last winter during the height of the coronavirus pandemic. The winter light and the trees’ yellowed leaves made it feel like I was spending time in a place fully outside of Los Angeles, when in reality I was only a few miles from my apartment.

Along the river, people biked, walked, roller-skated, bird-watched, caught up with friends. But I found myself most intrigued by the people who were fishing. In this unexpected environment of concrete, buzzing traffic and litter, the act of fishing seemed almost defiant: a tranquil outdoors activity against a backdrop of highway overpasses.

At the recommendation of one fisherman I met, I expanded my focus to also include a few local parks: Echo Park Lake, Hollenbeck Park and Lincoln Park, each of which contains lakes popular for urban fishing. Over the next three months or so, I’d spend three or four afternoons a week photographing, alternating between the four locations.

There were plenty of days where I’d only find remnants: a tackle box left by a tree, a tangled fishing line, a few dead fish. On other days I’d find one person out fishing. On the best days, I’d find a few.

As the pandemic raged and everything about city life felt so chaotic, there was something almost meditative about spending this time outside and seeing other people doing a bit of the same — just hanging out, trying to catch a fish or two.

On one afternoon, peering over the Fletcher Drive Bridge, overlooking the center of the Los Angeles River, I saw one man perfecting his fly casting. On another day, I spent hours talking with a fisherman who used hot dogs as bait and played heavy metal radio while casting — because he thought the fish liked it.

The images of outdoor sports we’re shown in magazines and ads often depict far-flung wilderness and highly technical sportsmen with expensive branded gear — things beyond the reach of the everyday person.

In the city, though, the fishers I met along the river were locals from nearby neighborhoods, people living just around the corner. Often they walked there. They’d come to spend a few hours at the water, mostly after work or on a day off.

Fishing along the river wasn’t part of some grand adventure, and that was the point. It is just a small respite, a break from the daily grind.