Do Birds Hide From Predators Even From Inside an Egg? 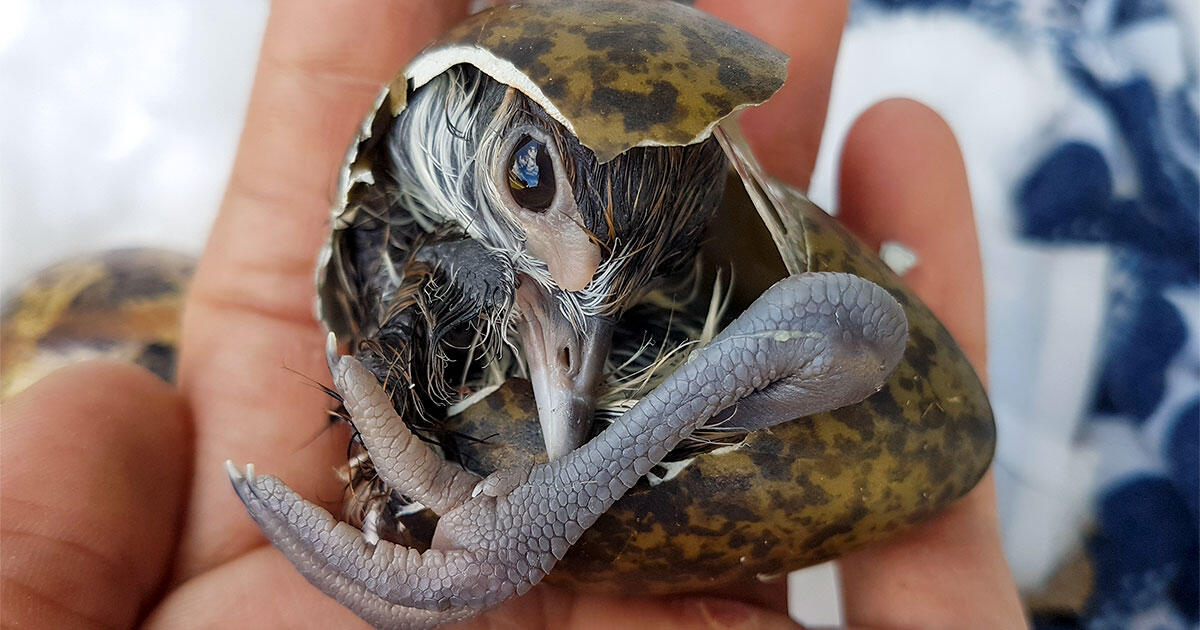 When under attack, people and animals alike have an inbuilt fight or flight instinct. But hatchlings of ground-nesting birds can neither flee nor defend themselves; their response in the face of danger is to hunker down and mute their cries.

It turns out that this innate behavior does not just begin on hatching. Surprisingly, it is already evident while chicks are still in the egg, according to findings published in May.

The study, in the journal Ibis, focused on Red-capped Plovers and Masked Lapwings, both shorebird species in southeastern Australia. Embryos of these birds typically emit embryonic calls—vocalizations from within the egg that occur in the last few days of incubation prior to hatching. To conduct the study, researchers spent many hours searching wetlands, saltmarshes, and fields for nests and waited until the eggs were within two to four days of hatching. Then they randomly selected 355 eggs from nests, placing them one-by-one into a sound-insulated container, and played various three-minute recordings: calls of a Little Raven, a ubiquitous egg predator; parental alarm calls; calls of non-threatening local birds; and white noise.

When the embryos heard the sounds of predators, they vocalized less from within the egg, but didn’t quiet down in response to the other recordings. To the study’s lead author, Deakin University doctoral candidate Kristal Kostoglou, this suggested that shorebird embryos could tell sounds from one another and show anti-predator behavior. “It demonstrates the high degree of chick development that occurs within the egg and their level of environmental awareness,” she says.

Given the exquisite camouflage of shorebird eggs against the backdrop of coastal nest sites, a silent egg is a relatively safe egg, Kostoglou reasons. Embryonic calls might allow nearby predators to home in on the egg’s whereabouts, so it makes sense for them to keep quiet.

But embryonic calling is in itself still a mystery. “The study is wonderful and is a starting point for more questions,” says Flinders University biologist Sonia Kleindorfer, who was not involved in the research. The first of those questions is why embryos call at all while still in the egg, when surely it would be safer to remain silent until they hatch.

Although embryonic calling has been reported in a range of birds, from gulls and pelicans to finches and quails, Kostoglou did not truly believe it until she had actually heard the chirps coming from eggs. “Little is known about these calls as there are only a limited number of studies on a small range of species available,” she says. “However, in recent years there have been a growing number of studies exploring communication across the eggshell.”

Recent research has highlighted birds’ prowess for embryonic learning. In 2012, Kleindorfer and her colleagues in Australia observed that newborn Superb Fairywren chicks expertly mimic the vocalizations of their incubating parents, suggesting that embryos can listen to and learn from external sounds. More recently, a Spanish team studying Yellow-legged Gulls found that exposure to parental alarm calls during incubation affected chick growth and behavior on hatching, indicating that the acoustic environment can have profound effects on embryo development.

Experts have several theories to explain why bird embryos call from within the egg. Kleindorfer says it is possible that they call to synchronize hatch date, which is particularly important in ground-nesting species since they are well-developed on hatching and leave the nest to forage independently very soon after. On the other hand, they could be demanding continued incubation: “The embryos might be signaling to the parent ‘don’t leave us, keep incubating us, we’re still alive!’” she says. This could help explain the new results—the embryos may be largely responding to cues that signal the presence or absense of a parent than to the predator itself, she says.

Kostoglou hopes that further studies featuring a broader range of shorebirds and external cues will reveal the exact mechanism behind embryonic vocalizations and help bring new insight to this relatively neglected area of research. It’s also important, she says, to learn more about how ground-nesting shorebirds learn to deal with predators: “Plover eggs are at high risk of depredation by red foxes and ravens,” she says. “They usually do not survive for more than a couple weeks without the assistance of predator exclusion cages.” Improved understanding, she hopes, will arm conservationists with information on how best to protect them.