Can a New Line of Work Help Save These Wild Welsh Ponies? 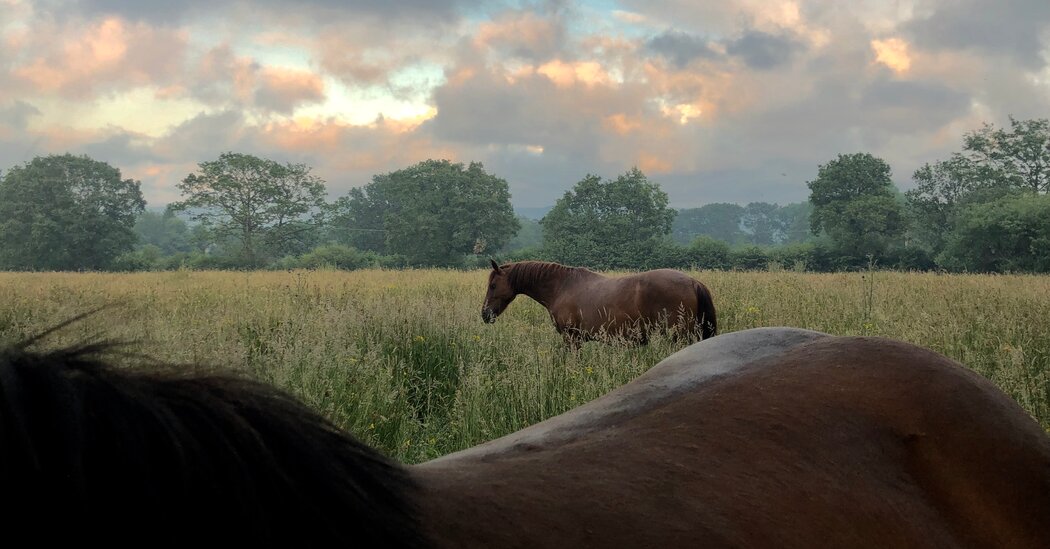 As a keen equestrian, I felt a little odd to be pulling on hiking shoes, rather than riding boots, as I prepared for a day out with horses. But this wasn’t going to be an ordinary hike.

My new friend Jacko snorted and threw his head to the side to watch as I carefully packed my camera gear into the panniers secured to his back. Quickly losing interest, he turned back to his hay net, which was tied to a fence that framed an expansive vista of the quintessential Welsh landscape: endless fields of lush green grass, bordered by thick hedgerows and dense woodland and leading through the valley toward the distant hills.

During the pandemic, I found solace in the picturesque countryside of my homeland in Wales, where herds of wild Welsh mountain ponies have roamed freely among the hills for centuries.

Although they are wild, the ponies are referred to as semi-feral, since the herds require some degree of management. The basic infrastructure of roads, fences and urban areas restricts the natural movement of the ponies, which can lead to overpopulation and health issues. Farmers therefore help manage the herds by conducting roundups, checking their general health and removing some of the ponies (especially the young males, or colts) to prevent inbreeding.

The animals have long been a source of pride and affection for the Welsh farmers who manage the herds. The sturdy, trusted ponies were traditionally used for a wide range of farm work. They also served a vital role as pit ponies, used underground in the once ubiquitous coal mines that have since disappeared from the Welsh landscape.

No longer required for these traditional roles, their presence in the Welsh countryside is in decline, and the management of feral herds is under threat.

In the hope of reversing that trend, Graham Williams founded Hooftrek, a tourism initiative which seeks to give the ponies a renewed purpose and restored commercial value to help ensure their survival. The company employs a herd of semi-feral ponies trained to carry packs and accompany hikers in the hills and mountains of Wales, while also continuing the tradition of breeding feral mares to help maintain the wild herds.

In September 2020, on an unusually sunny autumn day, I joined three friends from London, along with Louise, or Lou, a pony trainer and trekking guide, and Regina, a Hooftrek helper, in the Radnor Hills of Central Wales, for a walk alongside four semi-feral ponies.

When we arrived at the Hooftrek farm, the ponies were meandering freely around the property. After each hiker chose their preferred companion for the day, Lou instructed us on how to groom the animals and prepare them, and us, for the trek.

As we started hiking, it became clear that the strong-willed animals would be setting their own unhurried pace, stopping frequently for an irresistible mouthful of grass, and sometimes needing determined encouragement to overcome natural obstacles encountered along the way. As with the horses I grew up riding, the ponies exhibited varied — and outsize — personalities, with a mix of stubbornness and eagerness.

In addition to carrying our packs, the ponies brought an element of entertainment, companionship and a sense of achievement. All of us had to learn how to communicate with our ponies, and many of us clearly developed a bond over the course of the day.

The idea for Hooftrek was inspired by the success of French initiatives that overcame a similar problem with local donkeys, a working animal that was once central to farm and agricultural work there. “Going back to 1970, 1980, they turned the donkeys into part of the leisure industry,” explained Mr. Williams, the founder of Hooftrek. “Now there are dozens of farms in the hills of France where you can hire donkeys to carry packs along trails.”

He hopes his idea will help raise the profile of the Welsh herds, while also encouraging others to buy semi-feral ponies — especially the colts, who are taken away each year to prevent inbreeding. “There used to be thousands in Wales, but now we’re down to less than 500 breeding mares on all the different hills in Wales,” Mr. Williams said. “They used to be useful — they worked as farm animals, they were down the pits, and so the breed became very desirable around the world.”

As a result of the ponies’ versatility and popularity, the feral herds were for many years protected, and their offspring sold, generating an income for the farmers who managed them. Nowadays, domestic-bred Welsh ponies — born from animals that are mated in captivity — are prolific worldwide as much-loved pets and riding ponies, while their wild counterparts in Wales face an uncertain future.

Training ponies is a time-consuming task, especially for those that came from the hills, Lou said. “It takes time to build up their confidence and trust in humans — longer than with domestic bred foals, which is why it’s not so popular to breed on the hill anymore.”

Like all wild animals, ponies born on the hill have an innate instinct, Lou explained. “They have, over the centuries, developed the skills and knowledge of the land that enable them to survive in different environments and seasons that domestic-bred horses don’t necessarily have,” she says.

“These are our indigenous creatures, and it’s quite an honor to work with them,” she added. “They’re as old as the hills.”

Claire Thomas is a British photographer and photojournalist who focuses on conflict, humanitarian and environmental crises and social issues. You can follow her work on Instagram and Twitter.