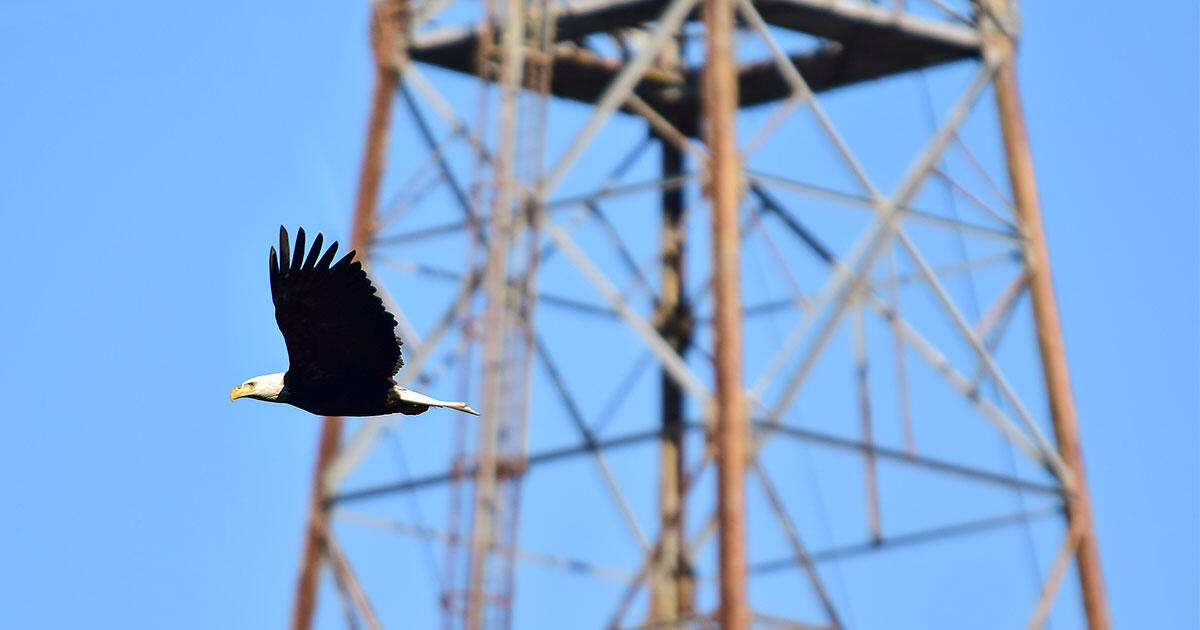 Each fall, hundreds of thousands of migrating waterfowl—including around half of North America’s Canvasback population—pass through the Upper Mississippi River National Wildlife and Fish Refuge. Strung along 261 miles of river corridor in Illinois, Iowa, Minnesota, and Wisconsin, the refuge also supports loads of shorebirds, several Great Blue Heron and Great Egret rookeries, and more than 250 active Bald Eagle nests.

That profusion of avian life is one reason environmental groups are trying to block a high-voltage electric transmission line that will cross the refuge on its way from Dubuque County, Iowa, to near Madison, Wisconsin. Electrical wires are a significant threat to birds; by one widely cited estimate, between 8 million and 57 million birds die each year in the United States by colliding with them. Opponents of the Cardinal-Hickory Creek transmission project fear the death toll could be especially high for migrants passing through the refuge, and also worry about grassland birds in patches of prairie along the line.

The project has received state and federal permits, and crews began work on the Iowa segment in April. Construction will begin in Wisconsin in October, unless environmental groups opposing it prevail in court. Their legal challenges don’t merely concern this one power line, the groups say—they’re about setting a precedent to ensure that the nation doesn’t sacrifice wildlife and public natural areas as it embarks on a monumental expansion of its transmission network.

“If you want to build a power line or build a pipeline, you’ve got property acquisition issues. But if you can march it through public land, you only need to get one approval,” says Scott Strand, a senior attorney at the Environmental Law and Policy Center (ELPC), a nonprofit law firm representing the transmission line’s opponents. “All of a sudden public land becomes the most attractive place to build these things, which is the exact opposite of what we set aside public lands for.”

Cardinal-Hickory Creek is not the only transmission project where concerns about bird safety have fueled controversy.

Cardinal-Hickory Creek is not the only transmission project where concerns about bird safety have fueled controversy. In South Carolina, residents of an island near Charleston are worried about what a proposed line will mean for its marshland birds. A planned renewable energy transmission project in Arizona and New Mexico has raised concerns about wildlife impacts where it crosses the San Pedro River and the Rio Grande, both important avian migratory corridors. And in Nevada, environmentalists have warned that a new law to expand transmission capacity could degrade habitat for the seriously imperiled Greater Sage-Grouse.

Given the daunting regulatory hurdles and local controversies associated with building big infrastructure projects, it can take 10 years or more to get a high-voltage transmission line approved and built. Those delays help to explain why experts say the American power grid is a congested, disjointed mess.

And yet, modernizing the grid and realizing President Joe Biden’s goal of 100 percent carbon-free electricity by 2035 will require an explosion of new transmission lines, experts say. Princeton University researchers reported last December that, to achieve net-zero emissions by midcentury, the nation’s high-voltage transmission capacity will need to increase by 60 percent by 2030 and triple by 2050. “The current power grid took 150 years to build. Now, to get to net-zero emissions by 2050, we have to build that amount of transmission again in the next 15 years and then build that much more again in the 15 years after that,” said Jesse Jenkins, one of the project leaders, in a press release at the time. “It’s a huge amount of change.”

In a nod to the scale of that challenge, Biden issued an executive order in January directing officials to find ways to speed up transmission projects. On Wednesday he endorsed a bipartisan infrastructure plan that, while scaled down from an earlier White House proposal, still dedicates $73 billion for grid upgrades, including “thousands of miles of new, resilient transmission lines to facilitate the expansion of renewable energy,” and creates a new authority within the Energy Department to guide that work.

That followed the administration’s announcement in April that it would make available up to $8.25 billion in loans for transmission projects. At the same time, the administration cited a report from the nonprofit Americans for a Clean Energy Grid (ACEG) identifying 22 “shovel ready, high-voltage transmission projects” that, if completed, would make possible a nearly 50 percent increase in wind and solar power generation. Among them is Cardinal-Hickory Creek.

The companies behind the roughly 100-mile line—American Transmission Company LLC, ITC Midwest LLC, and Dairyland Power Cooperative—say it’s necessary to improve electric reliability and carry more clean power from wind-rich states west of the Mississippi to more populated areas to the east. (ACEG President Nina Plaushin is a vice president at ITC Holdings Corp., of which ITC Midwest is a subsidiary.) Some green groups agree, cheering on the project as key to the region’s clean-energy transition.

The conservation organizations fighting Cardinal-Hickory Creek say they also support clean energy but argue that, in this case, the costs outweigh the benefits. The $500 million line is designed to carry a mix of energy types, not just renewables, they note. And, like other advocates for a more decentralized energy system, they contend that policymakers should prioritize more local solar power, storage capacity, and energy efficiency measures over long-distance transmission projects that net utilities handsome profits.

In May, the National Wildlife Refuge Association, Driftless Area Land Conservancy, Wisconsin Wildlife Federation, and Defenders of Wildlife sued the U.S. Army Corps of Engineers, claiming the Corps didn’t adequately review Cardinal-Hickory Creek’s environmental impacts before issuing required permits. The same groups sued the U.S. Fish and Wildlife Service in February, arguing that the transmission line is fundamentally incompatible with the purpose of the refuge. That suit also said the Rural Utilities Service violated federal law by failing to properly consider alternatives to the project. In addition, ELPC is representing environmental groups in two cases concerning the Wisconsin Public Service Commission’s approval of the project. None of those cases has yet been resolved.

Meanwhile, the project faces a new setback: The Wisconsin Public Service Commission moved earlier this month to rescind permits for the line, citing revelations of secret communications between a commission member and employees at the utilities developing the project. The commission didn’t scrap the project altogether, but reopened the decision-making process for public comment. It wasn’t clear if the encrypted communications related to Cardinal-Hickory Creek, but the utilities asked to submit a new application in the name of transparency.

If allowed to move forward, the project timeline calls for construction in the Upper Mississippi refuge beginning late next year. The refuge contains one of the largest areas of floodplain forest in the lower 48 states and is designated as a Wetland of International Importance through the intergovernmental Ramsar Convention. It’s also a designated Globally Important Bird Area. Critically endangered Whooping Cranes have been spotted in the refuge where the line will be built, the groups say in their legal complaint, noting that one study blamed power line collisions for 17 percent of Whooping Crane deaths in Wisconsin’s small migratory population.

The groups also say the project will require cutting down trees in a roughly 150-foot-wide right of way through southwest Wisconsin’s Driftless Area, marring a bucolic landscape of rolling hills and family farms by constructing towers up to 20 stories high. It will also pass through protected patches of remnant and restored prairie, such as the Military Ridge Prairie Heritage Area, which supports 14 rare and declining grassland bird species.

If completed, the line will also bisect property that the Driftless Area Land Conservancy protects through conservation easements, says Jennifer Filipiak, the group’s executive director. “What does it really mean to have protected land if a utility company can say, this is in the public good, we’ve decided, and you just have to have this?” she says.

The project’s developers say that alternative routes which don’t cross the refuge are unfeasible. The companies say they’ll take steps to minimize the harm to birds, such as using low-profile structures in the refuge, marking wires there to make them more visible to birds, and following guidelines from the Avian Power Line Interaction Committee. “The utilities are committed to minimizing the environmental impacts of the project, including those involving wildlife,” said Rodley Pritchard, a spokesman for the utilities, in an email.

Those measures should save some birds, but wildlife advocates argue that another option—putting power lines underground—would avoid avian collisions altogether. The utilities behind Cardinal-Hickory Creek ruled out burying the line, concluding it would be too costly for ratepayers, Pritchard said.

But supporters of a nearby project—another of the 22 high-voltage lines the Biden administration highlighted in April—say it shows that routing transmission lines underground can help the country meet clean-energy goals more quickly and without harming wildlife. The planned SOO Green project will carry wind and solar power underground between Mason City, Iowa and the Chicago area, linking large energy markets in the Midwest and the East. Direct Connect Development Company says its 350-mile project would be the nation’s first long-distance high-voltage, direct-current line built below ground. Measured in dollars per megawatt mile, the company says its $2.5 billion project will be less expensive than Cardinal-Hickory Creek because it has the capacity to deliver more power.

What really sets the SOO Green project apart, says Direct Connect CEO Trey Ward, is that the line will be buried along an existing Canadian Pacific Railroad corridor. That approach, he says, will not only avoid killing birds and cutting down trees, but also circumvent time-consuming fights with local governments and property owners. “Which means we can go fast,” Ward says. “And speed is going to be key to meeting President Biden’s ambitious goals.”

The Biden administration appears to agree that SOO Green’s model is one important way to decarbonize quickly. The Transportation Department issued guidance in April to help tap into existing rights-of-way, such as highway and rail corridors, as ideal routes for transmission lines.

In an ironic twist, however, SOO Green has been stuck in line behind other projects awaiting clearance to plug into PJM Interconnection LLC, a grid operator covering 13 eastern states and Washington, D.C. Direct Connect planned to start construction this year and be operational by 2024. Instead, SOO Green filed a complaint last month with the Federal Energy Regulatory Commission arguing that PJM has unduly raised the costs and risks associated with the project by repeatedly postponing a study of its potential impacts on the grid. Direct Connect now expects to begin construction in 2023 and finish in 2026.

Taken together, SOO Green’s delays and the fight over Cardinal-Hickory Creek hint at how challenging it will be to build the infrastructure required to slash emissions at the urgent pace scientists say is necessary. The White House touted those 22 shovel-ready transmission lines, including SOO Green and Cardinal-Hickory Creek, as opportunities to quickly grow the nation’s renewable energy output. And yet, the report’s authors acknowledge that getting those projects up and running won’t be enough to fully decarbonize the power sector. They’ll only get us about 10 percent of the way there.