Ask Kenn: What’s Up With Bird Color Morphs and Phases? 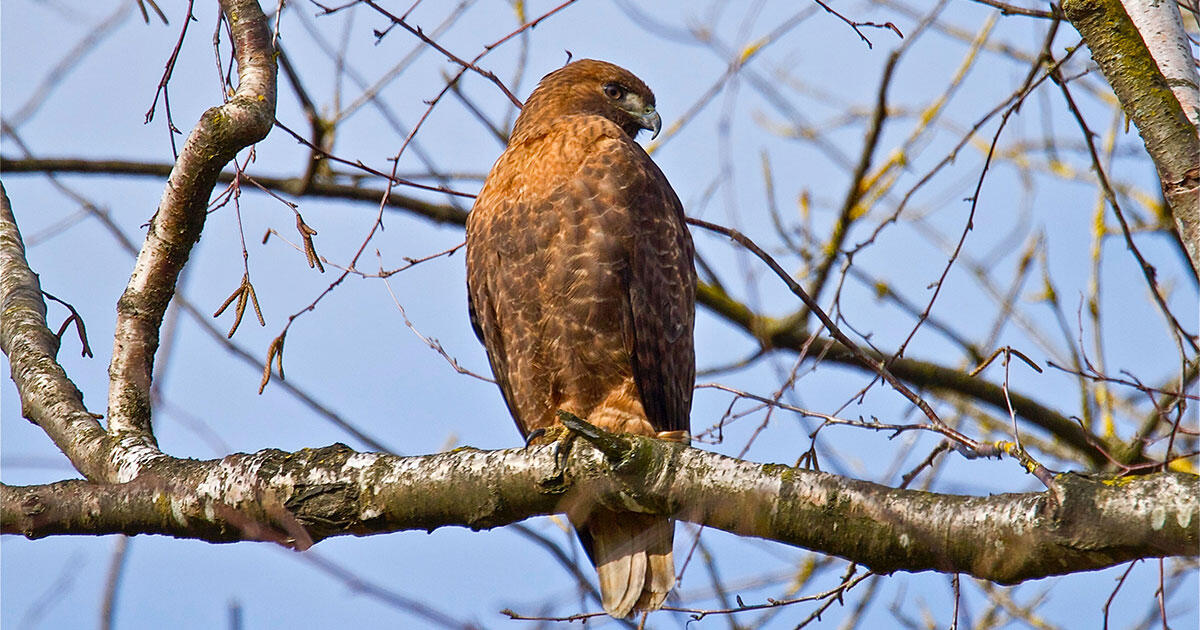 Kenn Kaufman: No two birds look exactly alike. This fact can make birding more interesting and, sometimes, more frustrating. Identifying them would be easier if every individual of a species matched all the others of its kind, but in reality there are many kinds of variations.

Individual variation occurs in every species. At a glance, each bird in a flock might seem identical, but when you look more closely, you see subtle differences. Study a winter flock of American Robins, and you’ll see how everything about them varies: the shade of rufous on the chest and gray on the back, the tone of yellow on the bill, the amount of streaking on the throat, the shapes of the white spots around the eyes and on the corners of the tail. Even birds in one solid color, like American Crows, show differences in shape and size if you hold and measure them. (But I don’t recommend that, so you may have to take my word for it.)

If we zoom out from the individual level, we can also see larger categories of variation. Many species show regional differences. These can be obvious: in the Northern Flicker, for example, the populations in the East have bright yellow wing-linings, while those of the West have salmon-pink. Dark-eyed Juncos breeding in different regions of North America wear distinctly different color patterns, with the “Oregon” Juncos of the Northwest bearing brown and reddish hues unlike the “Slate-colored” Juncos of the East, even though they’re all part of the same species. And in many birds, of course, males and females look different.

Most species also show some differences between juveniles and adults, and in some the age variations are extreme; Herring Gulls change appearance almost constantly for the first four years of life, with many immature stages between the dusky brown of juveniles and the gray and white plumage of adults. There are seasonal differences, too, as when male American Goldfinches molt from the subtle buff tones of winter to brilliant yellow in spring, and then return to buff again in fall. Even species that molt only once a year will show gradual change, with colors beginning to fade and edges of wing bars wearing away as time for the next molt approaches.

But a completely different kind of variation involves those species that have distinct color morphs. In these cases, the variants are not the result of geography since the different morphs live side by side. Nor are they caused by age, sex, or season. Instead, a significant percentage of the adult members of the species wear a different color pattern from others, and it’s a permanent condition. A species with distinct color morphs is said to be polymorphic.

Some examples are striking. In the Snow Goose, for example, adults are white with black wingtips—or mostly dark blue-gray, with white heads. The dark form was considered a separate species, called “Blue Goose,” until 1973; but the two forms barely differ genetically, they will mate with each other, and a pair of “Blue” Snow Geese may have some white offspring as well as dark ones. Despite their different looks, they are just color forms of the same species.

Another example involves the Eastern Screech-Owl. Most individuals are gray with intricate black markings, but some are bright reddish brown with reduced markings. (And some others are an intermediate gray-brown.) Overall, the “red” birds make up roughly one-third of the population.

And then there’s that seasonally appropriate polymorphic bird, the Wild Turkey. As described in an Audubon story a couple of years ago, about 1 in every 100 turkeys is an example of the “smoke” morph, with the usual reddish brown body color replaced by pale smoky gray. Domesticated turkeys can vary in color, of course (as is true of many domesticated birds), but the smoke morph occurs naturally in the Wild Turkey population.

For some polymorphic species, there is a geographic trend to where the different morphs are most common. In the Snow Goose, the blue morphs are most abundant in the central population that spends the winter near the Gulf Coast. Among Eastern Screech-Owls, the red morphs are most common in warm, wet climates—making up more than half the population in parts of the South—and scarce in dry climates, such as near the western edge of their range on the Great Plains.

Another example of geographic bias is notable in Red-tailed Hawks. In the eastern United States and Canada, almost all the Red-tails are of the pale morph, with white chest and dark belly-band. But in the West, many occur in dark or rufous morphs, with the underparts very dark brown or warm reddish brown. (There are other western variations, like the dark “Harlan’s” subspecies in Alaska and the mysterious pale “Krider’s” Red-tail on the northern prairies, but discussing all these would take up a whole column.) For whatever reason, North American birds of prey show more variation in the West than in the East. Swainson’s Hawk and Ferruginous Hawk, found from the Great Plains westward, both have fairly common dark morphs in addition to their typical patterns. The Broad-winged Hawk, mostly an eastern bird, almost never occurs in a dark morph—except at the northwestern edge of its breeding range, in western Canada.

There are also fascinating geographic trends in where the color morphs of some seabirds are found. Parasitic and Pomarine Jaegers nest on Arctic tundra and winter at sea, and they occur in pale and dark morphs, as well as some intermediates. In Parasitic Jaegers, the dark morph is more common in southern parts of the breeding range, such as southern Alaska and central Canada, while the pale birds predominate in the high Arctic. In Pomarine Jaegers, on the other hand, no such geographic trend has been confirmed. The Northern Fulmar, breeding in island colonies at high latitudes, also has both pale and dark morphs. In the North Atlantic the birds are almost all of the pale morph except at the northernmost colonies, where many are dark. In the North Pacific, oddly enough, the pattern is reversed, with mostly pale fulmars at the northernmost colonies and the dark morph concentrated farther south. These varying patterns of occurrence are puzzling for scientists who have tried to explain why such polymorphism develops in the first place.

As you may have noticed, so far I’ve mostly mentioned birds of prey and water birds. Only about 3.5 percent of the bird species in the world are polymorphic, and very few of these are songbirds. However, we do have one very common example in North America. Adult White-throated Sparrows occur in two color morphs, with head stripes of either tan or white; behavioral differences between these forms have been studied for years, providing no end of surprises.

You also may have noticed that I’ve just been talking about examples and haven’t answered the original question: Is it correct to refer to these color forms as phases or morphs? I’ve been hinting at the answer, though, by calling them morphs. The term “phase” indicates something that changes over time, like the phases of the moon. An avian example would involve Little Blue Heron. In that species, juvenile plumage is white and adult plumage is dark slate-blue. In between, when they’ve partly molted, their patchy dark-and-white pattern is often called the “calico phase.” That’s a phase, and it would be wrong to call it a morph—it’s temporary, not permanent.

So, when someone is excited to tell me they just saw a “red phase screech owl,” do I correct them? No. I know perfectly well what they mean, and I’m pleased they even know that this owl has different color forms. If they ask me about terminology I’ll explain that what they saw was a morph, not a phase. But unless they ask, I’ll just join them in celebrating the excitement of seeing these intriguing variations in nature.