Ask Kenn: Are American Robins Really a Sign of Spring? 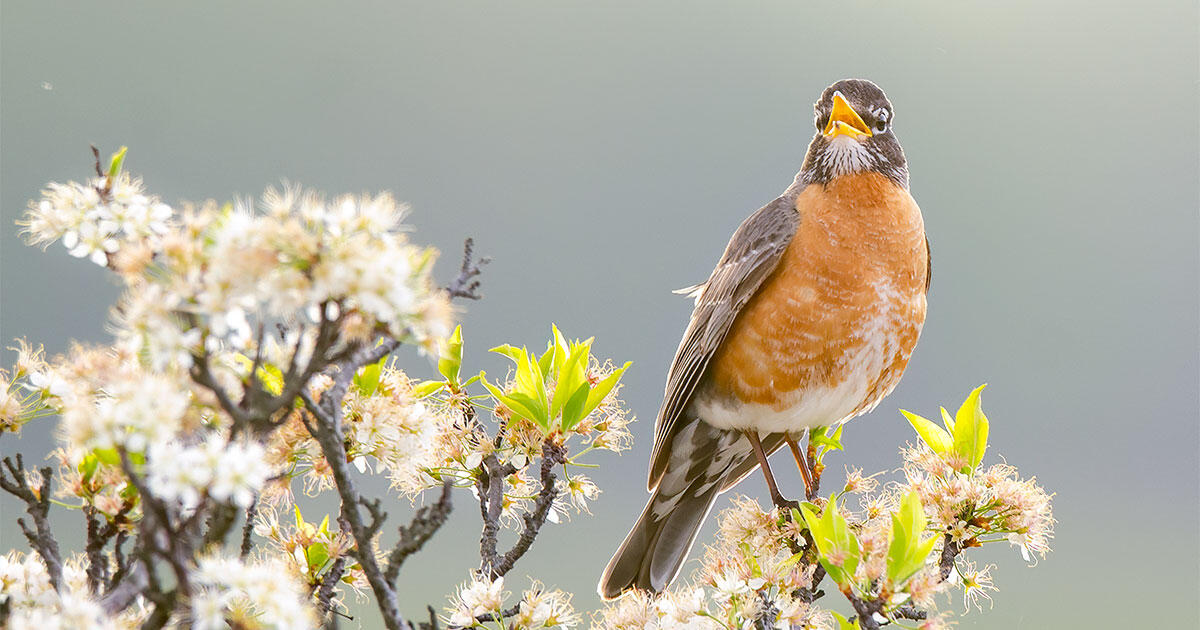 Who’s Kenn? Simply put, Kenn is a national treasure. A renowned birder, author, and conservationist, Kenn Kaufman has spent his life dedicated to observing birds, reading about birds, writing about birds, and sharing the world of birds with others. With all that birdy knowledge in his brain, he also acts as the field editor for Audubon magazine. So, whenever we have a bird question stumping us around the office, we just ask Kenn. And now you can, too! If you have a bird or birding question you’d like Kenn to answer, leave them on Facebook or send us an email. Maybe next month you’ll get the kind of thorough, thoughtful, and even humorous response from Kenn we’ve grown so fond of over the years. —The Editors

Question: People always talk about American Robins being a sign of spring, but sometimes I see the birds year-round. And recently I learned that many robins don’t even migrate. What gives?

KK: It happens every year. Between February and April, in birding listserves or on social media, some people will happily announce that they just saw their “first robin of spring.” And every year, others will respond by saying there’s no such thing, that robins are present at all seasons and that they shouldn’t be regarded as signs of spring.

Who’s right? Is that first robin a joyous sign of the season, or is its appearance meaningless?

On the range maps in most field guides (including in Audubon’s online guide and app), American Robins are shown as present all year across a broad swath of the Lower 48 States and up into parts of southern Canada. To the north, up to the northern limit of trees in Alaska and Canada, they are indicated as summer residents only. Most of Florida and the lowlands of the Southwest are mapped as winter range only. These maps are broadly accurate, but they obscure many details—especially where the species is shown as being present at all seasons.

Even where robins are found all year, it would be wrong to call them permanent residents. Few individuals actually stay in one place. It’s different with many other year-round birds—among Northern Cardinals or White-breasted Nuthatches, for example, individuals or pairs may stay on the same exact territory throughout the year. But this rarely happens with robins. There have been isolated cases, as far north as Kentucky, of color-banded male robins found on their breeding territories in midwinter, but these seem to be exceptions. The vast majority of robins, even if they don’t migrate a long distance, move away from their summer territories in fall.

Migrations and movements of American Robins are surprisingly complex. Banding studies have suggested that most birds move at least 60 miles between summer and winter, and some move much farther: One robin banded in central Alaska was found the next winter in Mississippi, more than 3,000 miles to the southeast. On the other hand, as far north as Michigan and Ontario, some robins have been found in winter within 60 miles of their summer locations. In places like southern Florida and southern Texas, south of the breeding range, there is huge variation in the numbers of robins showing up in winter, and there’s reason to believe that some individuals may migrate south in some winters but not in others.

American Robins are omnivores all year, eating insects and other invertebrates and a variety of small fruits, but the proportions vary by season. Insects and earthworms may dominate the menu in spring and summer, but during fall and winter, fruits can make up more than 90 percent of the diet. This shift is reflected in the distribution of the birds. It’s easy for pairs to stay in one place during the breeding season, guarding their little territories, because the insects they eat tend to be evenly spread across the landscape. The situation changes in fall because the fruits they seek are often very patchy in their distribution. Flocks of robins start wandering, seeking out trees, shrubs, or vines that are heavily laden with fruit. When they find such a bonanza—a big wild grapevine, a stand of junipers or hawthorns, or a thicket of winterberry holly, for example—the flock may feast for hours or days until they have stripped off most of the fruit. Then they move on.

Their diet and lifestyle demand that robins must be nomads in the winter months.

The amount of fruit produced by an individual plant each year can vary, depending on rainfall and other factors. So, as local weather varies from year to year, the amount of wild fruit available on the local landscape can change dramatically. Flocking frugivores like robins must be flexible: Perhaps staying in the north if the fruit crop is excellent, moving south if it isn’t, and always ready to pick up and move any time in fall or winter if the local food supply peters out. Their diet and lifestyle demand that robins must be nomads in the winter months.

How does all this variation in movement translate into what an observer might see in their own backyard? I’ll answer by describing the annual cycle in one spot that’s typical of the northern and central states and the southern edge of Canada: my yard in Ohio.

In late spring and early summer, three or four pairs of robins may have active nests nearby, so from May to July the yard is alive with busy adults and gawky fledglings. In August, their numbers drop noticeably, but that doesn’t mean most of the robins have departed to migrate south. Instead, we find them concentrated in a local wildlife refuge, feasting on fruits of native dogwoods and other plants. During September and October we see more robins again, but now they appear irregularly, passing through in flocks—often large flocks. Numbers drop again sharply in November. In December and January, we usually see none at all in the yard, although we can usually find a flock a few miles away, in deep woods with many fruiting vines or in a cemetery with plantings of fruiting trees. A few solitary individuals may pass through in February. Then suddenly, around the second week of March, there are multiple robins in the yard again.

In THIS backyard, then, what is it like when the robins reappear? It feels like a joyful awakening, a rebirth. After an absence of three months or more, suddenly the robins are back, bold in their colors, bold in their actions, amd impossible to miss. Flocks are passing through town on their way farther north, and we see them on open lawns after every rain, running and pausing, running again, seeking worms. Local males are starting to stake out territories, staging battles at the boundaries, with chases and strident cries. Soon they’ll be singing every morning, with that rich, full-throated caroling, the sound of spring sunrise across much of North America.

So in my opinion, both views are correct. Yes, robins are around all winter at these latitudes, and you can spot your first of the year on New Year’s Day if you go to the right places. But when the winter flocks break up, migrants begin pumping in from the south, and robins suddenly reappear in thousands of backyards? That is definitely a sign of spring, and it’s worth appreciating and celebrating.