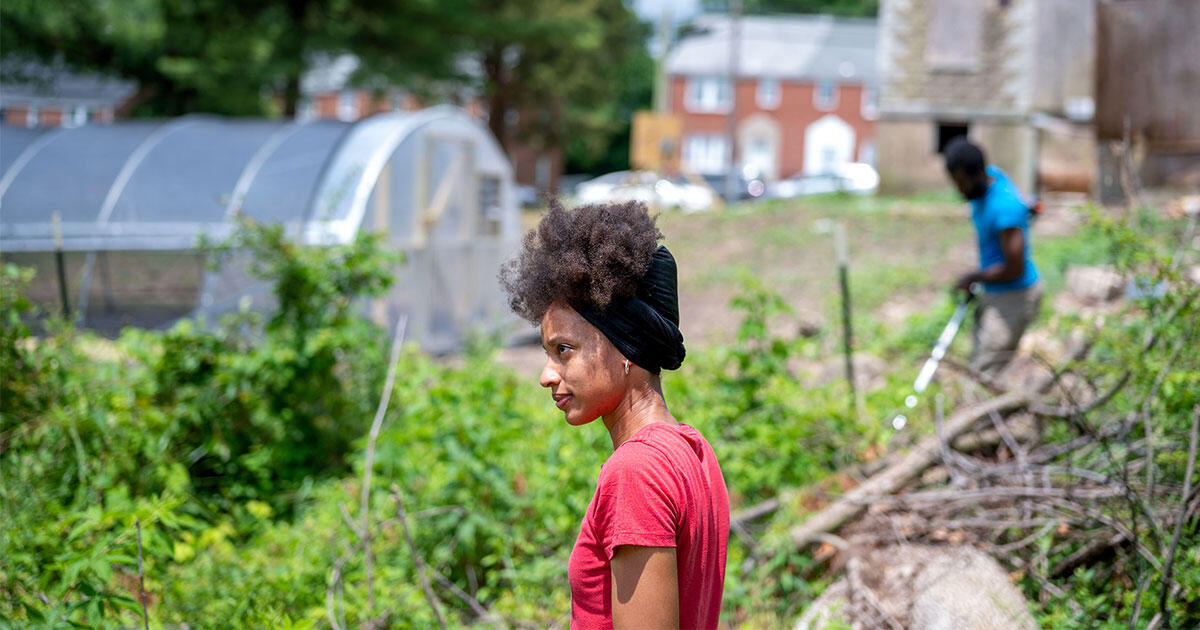 Atiya Wells’ career as a pediatric nurse first took a turn when she realized she simply felt happier being outside. She started hiking in her 20s, got married and continued exploring the hobby with her husband, and eventually, involved her kids, too. She soon started planning nature walks with other families and studying to become a naturalist.

As she explored nature near her home in Baltimore City, she noticed greenery everywhere—although its quality dramatically varied. Public parks, some created by the same landscape architects who designed New York City’s Central Park, offered wide stretches where residents could stroll, bike, golf, and play basketball. Weeds and grasses forced their way through cracks in sidewalks and potholes in city streets. Bushes and tall trees grew through rotted-out floors and fallen-in ceilings in abandoned homes that once held generations of families. One day in 2017 she was surprised to stumble upon an abandoned-looking area while searching for a place to study near her home. “The weeds were about as tall as me,” she says. She quickly saw its potential, however, and her land reclamation project called BLISS Meadows—which stands for Baltimore Living in Sustainable Simplicity—was born. “We really want to work in tandem with the nature that was already here,” she says.

Baltimore has a long-established history of racial redlining, which has kept Black residents in less desirable neighborhoods with fewer resources. As gentrification had already begun seeping into the city, Wells set out to create a deliberate space where people who have been historically marginalized could benefit from the land where they lived. “Our mission is to reconnect BIPOC people to land and nature, and so we are very intentional about that,” she says. “We’re very vocal about this space being for predominantly Black and brown people.”

BLISS Meadows has come together in pieces. Wells obtained permission to work on the seven-acre park plot, located in the northeast Baltimore neighborhood of Frankford, which had been donated to the city as a park space but had never been used as one. An adjacent, undeveloped 2.5-acre lot is also being donated by local resident Greg Cantori, who was impressed by Wells’ efforts in the community. And with the help of crowdfunding campaigns, Wells and her related nonprofit, Backyard Basecamp, also purchased a vacant house next door. Her organization is now in phase two of a five-year plan to transform the area from the neglected space she first found to a bustling piece of nature, full of vegetation, community members, and animals.

In putting together her vision, Wells was perhaps most concerned about Baltimore’s food deserts—places where residents found it harder to get access to fresh fruits and vegetables. She set about turning the land into a place where city residents could conveniently obtain fresh produce, joining a vibrant network of urban farms that residents, especially Black residents, have launched across the city. Today BLISS Meadow has a staff of two beyond Wells, plus plenty of volunteers from the community. They grow kale, collards, and onions. The area is lush and green and is home to several chickens, one rabbit, three goats, and two ponds with plenty of lizards and frogs. The animals eat weeds, till the soil, and keep down the overgrowth, and on a stretch of meadowland, native wildflowers sprout in spring. Honeybees are on the way, and the plot attracts a variety of common Baltimore birds, including hummingbirds, cardinals, robins, goldfinches, and a Great Blue Heron around the ponds. The team held bird banding events at BLISS Meadow this past spring.

As the crew cultivates the property, Wells envisions a space where people can seek healing from the trauma that systemic racism can inflict on Black and Indigenous people and commune with nature on their own terms. She is purposeful about consulting  people in the surrounding community to hear what they want and don’t want from the space. At one point the team was delivering 10-pound produce boxes door-to-door to neighbors, and using that as an opportunity to get feedback. Similarly, she has hired staff who live in the neighborhood they serve and understand the issues the area faces. Groundskeeper and farm manager Jordan Bethea saw the struggle for food accessibility firsthand in the community where he grew up, shopping in grocery stores with very limited fruit and vegetable options.

Going forward, Wells, who recently served on Audubon Maryland-DC’s board of advisors, is planning to create ADA-accessible trails and benches, plant an edible medicinal herb garden, and eventually turn the property’s rickety abandoned home into offices, indoor growing areas, and a vacation rental. While the city’s sprawling historic public parks have value, she hopes to see such smaller spaces become more commonplace. “Every neighborhood, and every neighborhood-within-a-neighborhood, should have some sort of community green space,” she says.