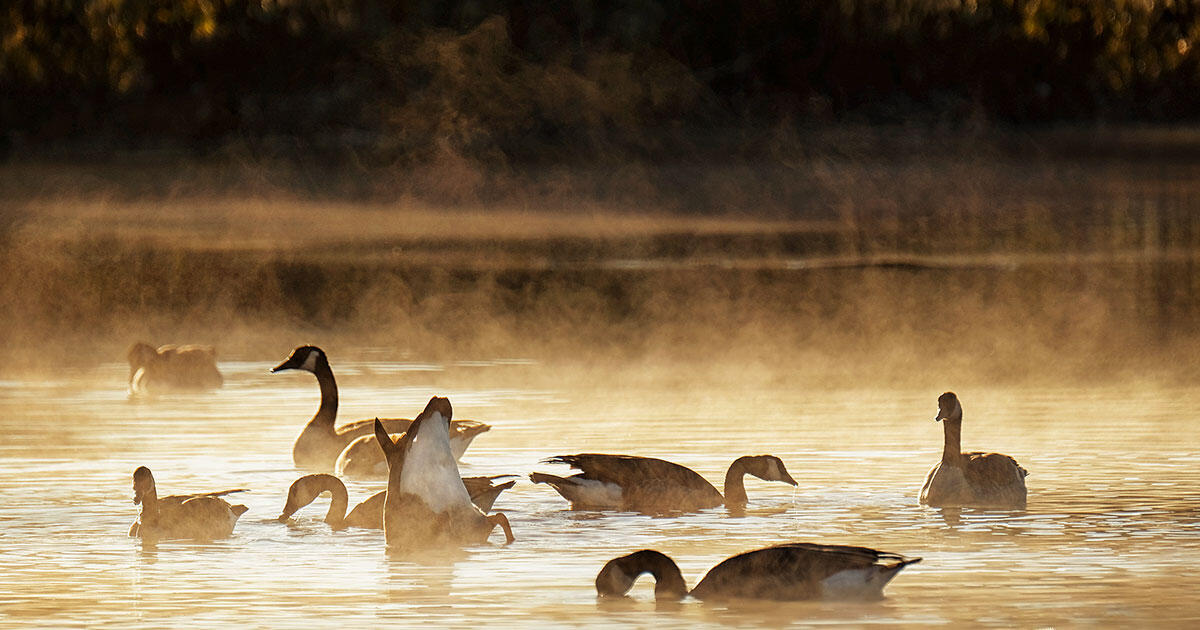 I had hoped to time my recent trip to rural southeastern Quebec with the wondrous Snow Goose migration. Everything seemed promising. I’d coached my non-birder spouse about the birds’ diagnostic field marks, and I ensured that our itinerary intersected with as many marshes as possible. Yet when we arrived, the marshes and fields were covered with Canada Geese, not a Snow Goose in sight. There was no other way to say it: We were early. Perfectly in time for the radiant foliage, but likely a week or two in advance of the Snow Geese in spectacular numbers.

Instead of the rare (to me) birds I’d hoped to see on our trip, I was rewarded with thousands of loud, honking Canada Geese as far as the eye could see. Warblers—except for the Yellow-Rumped—had almost all flown south already, and we were left alone on a rural property with Blue Jays, Ruby-crowned Kinglets, Song and White-throated Sparrows. Couldn’t the Canada Geese morph into Sandhill Cranes at the very least? Anything but the most common of common birds.

I’m ashamed to admit that I spent several hours scouring eBird, trying to will a Snow Goose miracle into existence, or at the very least, some other rarity. I perused lists from every hotspot in the county, subscribed to hourly alerts and…still nothing.

And then, just as I sat in an Adirondack chair on the property we’d rented, feeling dejected that I’d planned an elaborate road trip to see the exact same birds I see every day in Toronto, I noticed that one of the Canada Geese had abandoned the gaggle’s V-formation in favor of an alternate route. I watched the goose forge ahead, and I found myself admiring the fortitude that propelled this species to migrate perhaps hundreds of miles a day. In the city, I rarely give these geese the time of day; they’re ubiquitous and annoying. But here in the country, I took the time to notice their aerial mastery, their perfect control of their medium.

Our misconception about common birds is that they will be common forever. Yet in the beginning of the 20th century, a subspecies of the Canada Goose was near extinction, largely due to unregulated hunting. Management and targeted reintroduction programs have brought the subspecies back in droves. With this information in mind, I watched geese fly in formation and glimpsed the fragility of their existence. Left unchecked, the “giant” Canada Goose could have faced the same fate as the Passenger Pigeon. Suddenly the spectacle of a hundred thundering geese in the field next door was something to be excited about.

Our misconception about common birds is that they will be common forever.

A few days before my trip to Quebec, the U.S. Fish and Wildlife Service announced its plan to declare 23 species, including the Ivory-billed Woodpecker, extinct and delist them from the Endangered Species Act. This sad news colored my vacation mood, but instead of depressing me, it motivated me suddently to appreciate the birds in front of me. In the announcement, the agency stressed that we need to “conserve species before their declines become irreversible.”

To me, the key word here is before. Rescuing a species on the verge of extinction is heroic, certainly, but we would be serving wildlife far better if we worked towards a more enduring—if less flashy—form of care: preserving and protecting the birds in our midst. Including the ones we see every day. Rosalie Edge’s famous adage is especially relevant: “We need to protect all species while they are common so that they do not become rare.”  We’ve lost an estimated 2.9 billion North American birds in the last 50 years, and among the fastest declining populations are, in fact, common birds, such as Red-winged Blackbirds and Dark-eyed Juncos. The ones we see so often we barely register them. How many more warnings do we need before we start paying attention in earnest?

I hadn’t expected to spend a week staring at Canada Geese with glee. But as I paid closer attention to them, I noticed an American Kestrel flying and then taking refuge in the garden bed, lurking. Then I saw another, and a third, and all together they kept vigil, occupying a bare tree. After breakfast they were gone, chased away by the raucous crows. When I stopped hoping for something “better” to appear around the corner, I noticed anew the majestic dihedral soaring of the Turkey Vulture scouting the woods for carrion, stopped at the comical sight of a gang of Wild Turkeys hanging out in a field (perhaps discussing the weather), and eavesdropped on the chatter of White-throated Sparrows punctuated by the incessant tapping of a Hairy Woodpecker. Watching these birds so closely, I felt that I was in the company of friends.

Our propensity to undervalue and underappreciate common birds—usually in favor of a rarity or an exciting migrant—is a sad sign of our near-sightedness. It’s the common birds in front of us that are a gift we can’t afford to take for granted, but not only for reasons we may think. Paying close attention to them as individuals not only makes us better birders, but also better people—more attune to nuance, detail, the quirky behaviors of others. Above all, their presence teaches us to find the extraordinary in the ordinary. Even—and especially—when they’re Canada Geese.