Absent for More Than a Century, California Condors Soar Above the Redwoods Again 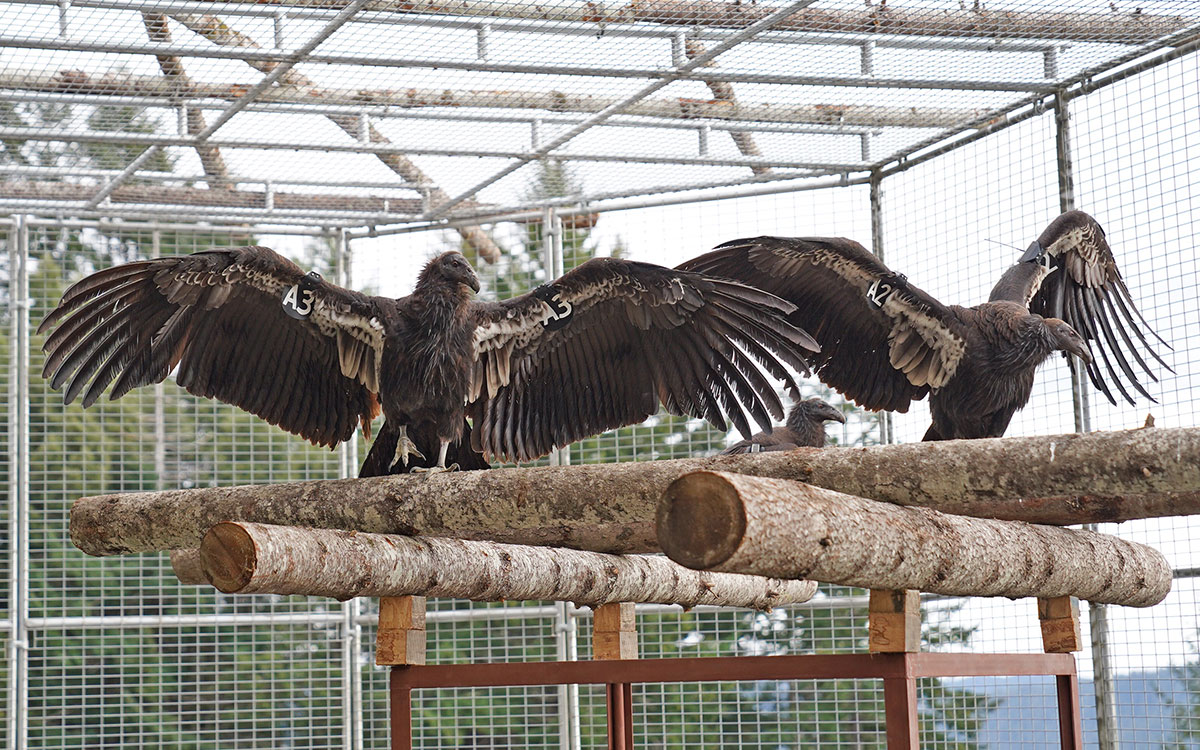 After more than a century, California Condors are once again roaming the skies above the Pacific Northwest. Extinct in the wild as recently as the 1980s, the colossal birds with 10-foot wingspans have slowly been making a comeback across the West thanks to dedicated conservation efforts. Now, following 14 years of work, the Yurok Tribe has finally brought the birds home to another region of their historic range.

Condors once thrived from British Columbia to northern Mexico, and more than 300 birds now fly free in southern and central California, east to Utah and Arizona, and south to northern Baja California, Mexico. But they’ve been conspicuously absent from these northern skies since 1892, the Yurok say. The tribe endeavored to bring condors back not only for the good of the species, but as part of a larger effort to restore the ecosystems and revitalize the cultural landscape of the ancestral Yurok homelands.

“It’s really amazing to be the next big step for condors,” says Tiana Williams-Clausen, a member of the Yurok Tribe and director of the tribal wildlife department. “To know that we’re restoring them to Yurok ancestral territory, and this is restoring an integral and indescribable part of our spiritual and ecological community—it’s a really big deal.”

With hardly any hesitation, the first two condors soared out of their release pen in Redwood National Park and into the morning sunlight on May 3. Both birds, officially designated with tag numbers A2 and A3, are young males. In the coming weeks, two more birds, A0, a young female, and A1, another young male, will be released—the first four settlers of a budding population that will grow each year, both on their own and with additional releases.

All four pioneering birds are juveniles who were raised in breeding centers and have never navigated the world on their own. Biologists prepped the young birds for weeks, watching around the clock as they adjusted to their surroundings, learned to avoid threats like power lines, and established their flock dynamic with the help of an older mentor bird. The staggered releases will draw the free-flying birds back to socialize with the group and help biologists to carefully monitor their behavior.

The release event was closed to the public to ensure a low-stress transition for the birds, but a live stream of the event attracted supporters who tuned in from around the world: from across California, to Canada and even Spain. Congratulations and cheers filled the chat, with Williams-Clausen whispering updates to the audience throughout, causing some viewers to refer to the morning as “condor ASMR.”

In Yurok tradition, the tribe’s relationship with condors stretches back to the beginning of time.

Efforts to return condors to this northern stretch of the California coast began back in 2003, when a group of Yurok elders gathered to assess how best to restore their ancestral land. Historically spanning more than one million acres centered around the Klamath River, the region is dripping with natural resources. Herds of elk parade across the road, and layers of redwood forest peek through the creeping fog that streams in from the sea in the evenings, retreating in the mornings like a tide. The tallest trees in the world thrive off the nourishing moisture that curls around them. Beneath its natural beauty, however, the land was suffering from ecological damage. The tribe has worked to restore watersheds impacted by commercial logging, renew salmon runs, and regain coastal prairie habitats through controlled burning. But another hole remained in the landscape. “The elders decided both for cultural and ecological reasons that Prey-gon-eesh, the California Condor, was the most important land-based species to bring back,” Williams-Clausen says.

In Yurok tradition, the tribe’s relationship with condors stretches back to the beginning of time. Condor feathers adorn regalia worn for world-renewal ceremonies, which also center the song of the condor—chosen by the Creator as the “most beautiful, the most powerful” song of all the animals, Williams-Clausen says. As the highest-flying bird in this part of the world, condors are believed to carry the prayers of Yurok dances intended to bring the world into balance. “Not having Condor here to help bridge the gap between the spirit and the physical world to help make that balance a reality is very harmful to us as tribal people,” she says, “because our entire reason for being is to make that balance happen.”

To begin the process of returning condors to Yurok skies, Williams-Clausen and biologist Chris West built the tribal wildlife department from scratch in 2008. The following years were filled with feasibility studies, community outreach, and a lengthy permitting process with the U.S. Fish and Wildlife Service (FWS). Condors remain very much an endangered species, and the broader recovery team had a lot of questions before agreeing to provide birds for the effort. Condors are still so scarce that each bird released to the wild is born and raised in a breeding facility, with careful attention to maximizing the genetic diversity of the population. Releasing condors to a region where they’ve been absent for generations needed to be approached with care. “While we do know that they thrived here once, the question was, could they thrive here again?” Williams-Clausen says.

In March 2021, the FWS finally granted approval to reintroduce the birds as an experimental population under the Endangered Species Act. “I just had to sit down and cry a little bit, because it’s literally been my entire life’s work to make this happen,” Williams-Clausen says. “It’s been a hard 14 years.”

The experimental status recognizes the new population as beneficial for the species, but eases regulations that could otherwise create opposition to their reintroduction, such as restrictions on timber harvesting in the region. For at least the next 20 years, the tribe will reintroduce 4 to 6 birds each year.

But preparing for the celebrity birds was no small feat. To prep birds for release, they are first transferred to a large on-site enclosure where they can socialize with their flock and adapt to their surroundings. Once the birds are free-flying, the intensive care and support continues throughout their lives. Biologists leave carcasses for the birds around the enclosure, luring them back to the safety of the base with the irresistible scent of rotting flesh.

Keeping the birds in the area has several benefits. As the condors feed, for example, biologists will note who eats first, hoping to understand the birds’ evolving social hierarchy. The caretakers will also scan their bodies and behaviors for any signs of distress, which could signal that they’ve consumed fragments of lead bullets—the biggest threat to their survival—when feeding on a hunter’s discarded carcass. And at least once each year, they’ll trap the birds in order to test their blood lead levels and replace the batteries on the GPS tags attached to their wings. In fact, several people will be devoted to the birds full-time, providing the carcasses and tracking their every move. West himself has been studying condors since 1999, and he still lights up when he talks about their behavior. “That’s still where my heart lies,” he says. “I could sit and watch them interact socially all day long.”

The tribe partnered with Redwood National Park to identify an ideal location for the condor base camp, choosing an open glade with sweeping views of redwood trees leading to the Pacific Ocean. The entire site—about the size of a football field—had to be ringed with a 15-foot-tall electrified fence, which makes the whole place feel like something from the set of Jurassic Park. The region is home to so many black bears that, without the fence, bears would simply abscond with the meat, West says.

Despite hundreds of dedicated biologists working tirelessly to increase the number of condors in the United States, the birds are released into a world where threats, nevertheless, remain. In some ways their recovery is easier than that of other endangered species, with condor habitat—vast, open spaces—still abundant in the West. But lead bullets are condor kryptonite, and human behavioral change is a slow and stubborn beast. While California banned lead ammunition for hunting in 2019, other states in the birds’ range still allow it in some circumstances. Even within California, many hunters balk at switching to alternatives, and the threat of lead poisoning hovers over every carcass. Between 1992 and 2020, at least 107 condors succumbed to lead poisoning—as much as every other cause of death combined.

Fortunately, there are signs of progress, says Dan Ryan, a National Park Service biologist who works to promote the transition away from lead ammunition. “We know what the problem is, and we know that the solution is just a behavioral shift by a subset of humans,” he says. Hunters are starting to see themselves as part of the solution, Ryan believes, and rather than asking why they should make the switch, they’re starting to simply ask how. Falling prices on lead-free alternatives are also helping to ease resistance. “​​I think we’re getting there,” he says, “it’s just going to take some time.”

The remote coastal location of Yurok ancestral lands may mean that the birds will encounter fewer lead-laden carcasses and feed instead on washed-up marine mammals. Unfortunately, there is a tradeoff, as even the sea can’t escape human contaminants. In southern and central California, residual DDT levels remain high in the tissues of marine life. Though banned in the 1970s, this fat-binding chemical accumulates in the blubber of whales and sea lions, contaminating their carcasses and thinning condor egg shells. But research conducted by the tribe to prepare for the reintroduction showed that DDT levels were lower on the northern California coast. “We’re hoping there won’t be any reproductive issues in our area,” Williams-Clausen says. “Though, of course, the proof will be in the pudding once we have reproduction.”

Although the Yurok Tribe is leading the effort, Williams-Clausen emphasizes the importance of building an ecosystem of support within the local and surrounding communities. “We knew that because condors fly anywhere from 100 to 200 miles in a day that we would need just an amazing variety of partnerships,” she says. More than 16 groups signed the tribe’s memorandum of understanding for the condor recovery effort, from conservation groups and regional zoos, to utility and timber companies. The tribe’s primary partnership is with Redwood National Park, and they collectively form the Northern California Condor Restoration Program, which will work collaboratively with other condor recovery teams from across the birds’ range. “I didn’t realize that this would be the most important thing I do in my career with the National Park Service,” said Dave Roemer, deputy superintendent of Redwood National Park, on the day of the condor release.

The Yurok Tribe’s relationship with condors celebrates them as symbols of renewal, Williams-Clausen says, because rather than prey on the living, they feed only on the dead, and in so doing convert death and decay back into life. The herculean effort to bring condors back from the edge of extinction is only the most recent way that they’ve come to represent rebirth.

The day of their release, Williams-Clausen gave each pioneering bird a Yurok nickname: “Poy’-we-son” for A3, the first one to charge out of the door. “It means literally the one who goes out first, or ahead,” she says, “and was traditionally the title of a headman, a well-respected leader in a village.” Condor A2 followed only seconds after, and is named “Nes-kwe-chokw.” It means, “He returns.”