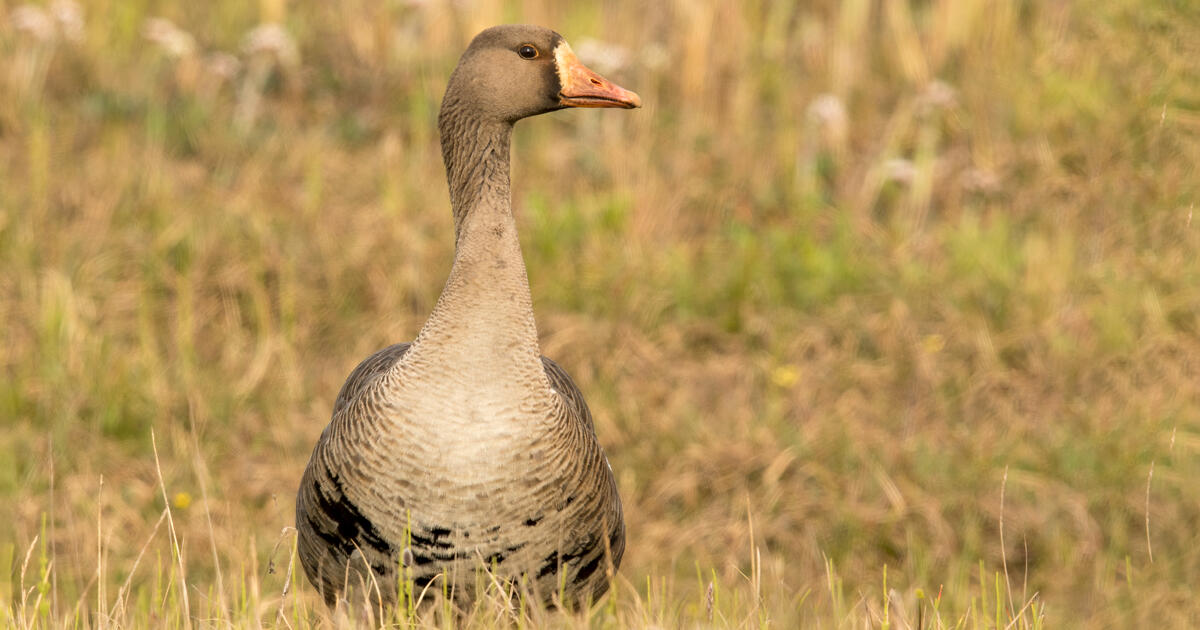 On a sunny April afternoon in 2021, I was part of a group of four friends and our five dogs as we walked on a deserted beach along the shores of Alaska’s Resurrection Bay just outside of Seward. On this coastline recently freed from a winter’s worth of deep snow, we discovered various treasures scattered along the tideline: urchin shells, gull feathers, the clean white skull of a Bald Eagle. Suddenly, our pack of huskies noticed a pile of bloodied feathers strewn about. We hurried the dogs along to keep them out of mischief, but soon something that looked like an oversized orange fitness watch piqued our interest.

On closer inspection, we could hardly believe our luck—it was a GPS tracking device for birds, outfitted with a tiny solar panel on its side. The scattered feathers seemed to indicate we had stumbled upon the remains of a Greater White-fronted Goose. On the device was a hint to the identity of the species: contact information for Dr. Cory Overton, a longtime waterfowl researcher at the US Geological Survey’s (USGS) Western Ecological Research Center in California.

Together with Mike Casazza, Overton runs a tracking study of Greater White-fronted Geese and other waterfowl species. These two leading USGS wildlife researchers have worked together for years on the Suisun Marsh Waterfowl Project. They collect tracking data to better understand the migration routes, timing, and behavior of ducks and geese. The project informs management practices that will maintain waterfowl populations in California today and into the future.

I brought the tracking device back home to Anchorage and set it to recharge in a sunny window. Upon activation, it transmitted the tracked satellite-based location data via cellular tower to a database accessible by Overton. Their tracking database includes more than 7 million locations from 1,250 individual birds of 12 species of ducks and geese, an incredible amount of data to help demystify waterfowl migration. For example, it was not previously known that Greater White-fronted Geese rest during migration by rafting together on the open ocean, making it possible to take a direct route across the Gulf of Alaska. This saves the geese both time and energy along what can be a perilous migration journey.

Using this trove of information, Overton explored this tracker’s locations to take up a virtual wild goose chase to find out the pathways taken by our individual goose. We learned that this female Greater White-fronted Goose was initially tagged at the Sacramento National Wildlife Refuge in February of 2020. During that first breeding season she migrated all the way to the Yukon Delta National Wildlife Refuge, south of Chevak, Alaska. Fast forward to her second trip north during which she crossed the Gulf of Alaska in late April 2021 and stopped for the day next to Safety Cove State Marine Park near Seward. Just before noon local time she was still at that spot, but thirty minutes later she was on the beach in western Resurrection Bay, where we found the tracker and her pile of feathers some three hours later. Overton surmised with some certainty that she had unluckily become lunch for a Bald Eagle that must have picked her out of a flock while she was in the air. It is incredible to be able to piece together her story in this much detail—a testament to the value of these tracking data and the researchers that have dedicated their careers to shedding light on the wonder of bird migration.

Migratory birds face a variety of challenges while traveling such long distances. Luckily, populations of Greater White-fronted Geese have increased tenfold since the 1980s, and now more than one million of these birds spend their winters in the Central Valley of California. Tracking studies like Casazza and Overton’s help us better understand why some species thrive while others decline and the role that threats like our changing climate may play.

When asked how people can help waterfowl conservation efforts like theirs, Casazza and Overton encouraged supporting conservation organizations like Audubon and Ducks Unlimited as well as learning more about local waterfowl habitat conservation efforts. They also recommend participating in community science projects like Audubon’s Christmas Bird Count and eBird, which is managed by the Cornell Lab of Ornithology. Together, all of these different types of bird data help researchers and conservationists protect birds and the places they need, today and tomorrow.