A Tale of Two Migration Routes: How Prothonotary Warblers Make Their Way Home 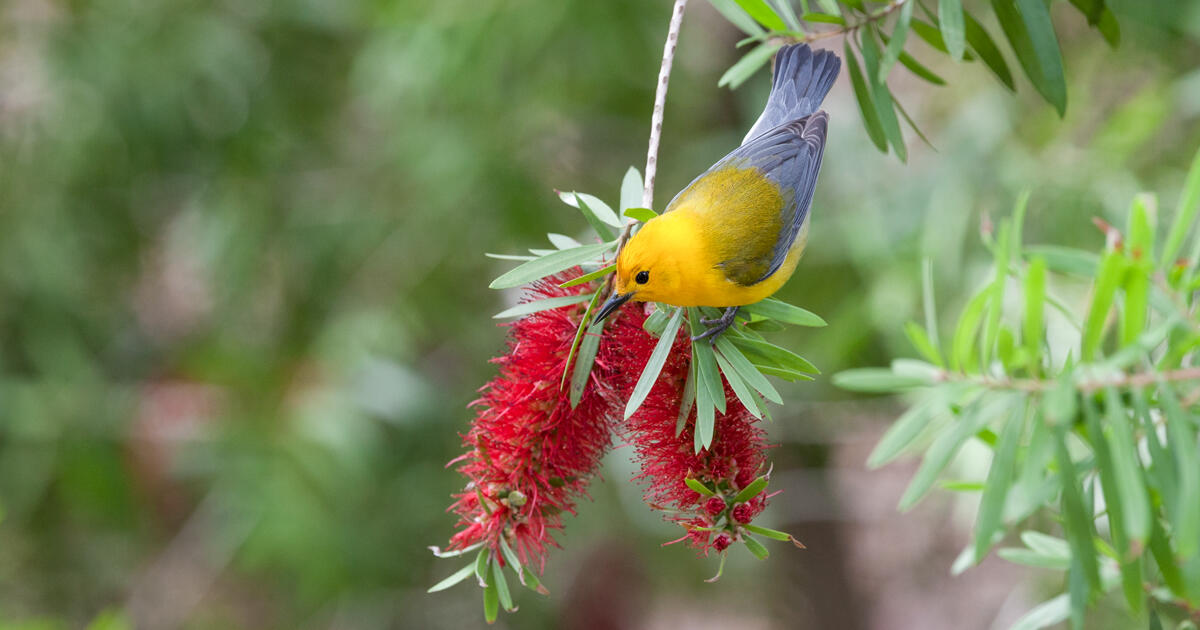 When Chris Tonra and his team deployed light-level geolocators to track Prothonotary Warblers in 2016, little was known about how these birds travel to their wintering grounds in South America.

“We knew they staged along the Gulf coast and had some idea of their wintering distribution,” says Tonra. But in terms of which breeding populations ended up where and what routes they took to get there, Tonra admits “we didn’t know much.”

So, when the Prothonotary Warbler Working Group published their findings in 2019 and revealed where these birds move throughout the year, it was eye-opening. They found that birds that bred in the eastern and western regions of their range took very different routes to get to the same wintering location. As co-author Erik Johnson of Audubon Louisiana explains, “One of the surprises was that Prothonotary Warblers, especially those from the western side of the breeding range, are crossing over the Gulf of Mexico to the Yucatan in not just the spring, but also the fall.”

Moreover, they found that the vast majority of the birds they tracked wintered in northern Colombia, regardless of where they bred. This finding highlights how understanding where a species moves throughout the year can inform where conservation is most effective.

“Our results indicate that if you take action in northern Colombia, you will have impacts across the whole breeding range. In terms of getting bang for your conservation buck, you’re getting a lot when you take action in northern Colombia,” says Tonra. This research has recently translated into conservation action, as several partner organizations acquired nearly 4,000 acres of protected habitat adjacent to El Silencio Natural Reserve, nearly doubling the size of the reserve.

Conservation actions like these are the goal of the Prothonotary Warbler working group, which was brought together out of concern for this iconic southeastern species, affectionately nicknamed the “swamp candle” for the contrast of its bright yellow color against the backdrop of its breeding habitat. Given that 15 to 25 percent of the global breeding population is in Louisiana and 20 percent is in South Carolina, these local Audubon offices have been heavily involved in the research.

“Prothonotary Warblers are canary-like in more ways than their beautiful yellow coloring. They also act as good barometers of the health of wetland ecosystems,” says co-author Matt Johnson of Audubon South Carolina.

Tonra is adamant that collaboration is key in order to learn more about this species and protect it. The tracking study’s lengthy list of co-authors and their varied affiliations are a testament to how well the working group functions. “We are able to accomplish this because we have a collaborative network that is committed to the conservation of the species. It is really a team effort,” asserts Tonra.

And this team isn’t done yet. Just this past year, the working group published another study, which found a positive relationship between body mass and breeding latitude for this species. Ultimately, their aim is to use their research to help protect this beloved species.

“We have learned where they’re going,” says Tonra. “Applying the data [to inform conservation] is the next step.”