A Personal Pilgrimage to a Downed Warplane in Papua New Guinea 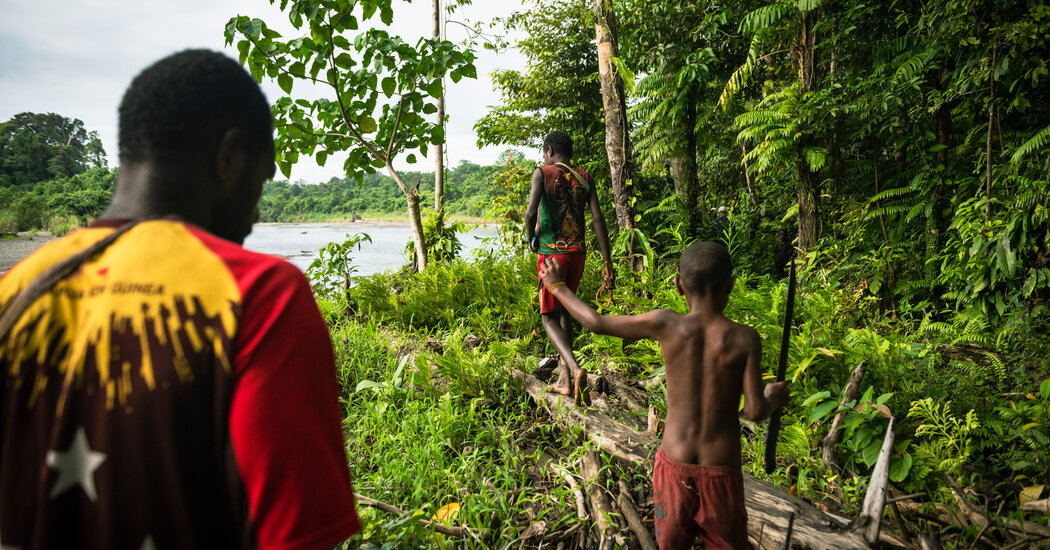 Early in the afternoon of April 5, 1944, an A-20 Havoc, wrestling with apparent engine trouble after an attack on the Japanese stronghold of Hollandia (present-day Jayapura, Indonesia), withdrew from formation and fell from the sky. It vanished into a thick jungle canopy, exploding on impact. On board were Second Lt. Thomas Freeman, 23, and Cpl. Ralph A. McKendrick, 22.

I visited and photographed this World War II crash site in 2019. But it wasn’t my first visit. That came in 1986, when I was 12 years old. My family had recently moved to Papua New Guinea to work with a Bible-translation organization — some 800 languages are spoken there — and, as part of our introduction to its life and culture, we lived for six weeks in a village called Likan, beside the Clay River in East Sepik Province. The wreck site was an hour’s hike from the village.

Those weeks as a child in Likan were — and they still are — a treasure. You felt your body through the tropical air as it laid a blanket of humidity across your face, through the clayish soil on your bare feet, through the river’s cool water as you jumped in. You felt a connection with the people who looked after you, taught you. On hikes outside the village, while crossing over trees that had fallen across streams and gullies and that served as rustic bridges, villagers, skilled at balancing, would hold your arms and keep you steady.

Back in the village, you sat outside homes and shared stories, tasted new food, learned new words, watched the fading light of another day. On clear nights, you looked up in wonder at the Milky Way. You felt a burgeoning sense of home.

This time and place in my childhood nurtured a sense of relatedness. The crash site did, too.

Early in our stay in Likan, a group of villagers led my dad, my sister and me to the site. I remember the shrill sound of insects, the remoteness, a sense of the sacred as the wreckage came into view.

Though there was much I was coming to love about living in Papua New Guinea, I was also still grieving the separation from a place — the United States — and the people I had left a few months before and knew I would not see again for four years, which is a long time for a 12-year-old.

To stand before this wreckage was to be keenly aware that others had also been far from home. To gaze at the United States Army Air Forces insignia on the fuselage, to touch the rivets, to pick up one of the many .50-caliber cartridges scattered in the soil, to consider that two lives ended here — it provided a larger context in which to put my own distance from home, my own place in the world.

This wreck, then, was not just a relic of war. It was also a message, an envoy, a neighbor.

In 1967, a U.S. military team recovered the remains of the crew. But it was only in the past few years, through a website called Pacific Wrecks, that I learned the names of these two men. Lieutenant Freeman was from Wichita County, Texas, and had enlisted in Dallas in April 1942. Staff Sgt. McKendrick — he was posthumously promoted from the rank of corporal — was from McKean County, Pa., and had enlisted in Buffalo, N.Y., in October 1942.

On June 20, 2019, sitting beside the pilot in a single-engine Quest Kodiak, I looked out over familiar landscape as the plane neared Likan. Twenty-seven years had passed since my last visit in 1992, and I and many others were making the journey here to celebrate with the community the completion of the New Testament translation into Waran, the local language. As the plane lined up for landing on the grass airstrip, I felt a deep joy — the sort you feel when, after a quarter century of wandering, you are returning to a central place in your life.

There were embraces and reunions, an old friend’s hand resting on my knee as we sat and shared stories. There were gray hairs and fading eyes. There were introductions to children and grandchildren, the sharing of some breadfruit (the taste of which I had sorely missed), the cool water of the river once more on my skin.

This return felt like a pilgrimage, a journey back to meaningful things that shaped me as a child and that I yearned again to encounter. This is part of the reason that, within 24 hours of touching down, I was hiking with others out of the village, back to the crash site. Now having lain on the jungle floor for 75 years, the plane was slightly reduced in size; bit by bit, parts like a propeller had been carried away.

But the bulk of it was still there. And standing before it, no longer a child, this is what I saw: That life is something that reaches distantly back in time, and forward toward an uncertain future. That life is birth and death, touchdowns and departures, a web in which we are all connected. That life is corrosion and decay, blossoms and smiles, the squawk of a cockatoo. That life is telling one another’s stories — our stories — and helping each other keep balance, whether crossing rickety bridges or simply moving through time.