A Historic Moment for Large-scale Restoration in the Gulf 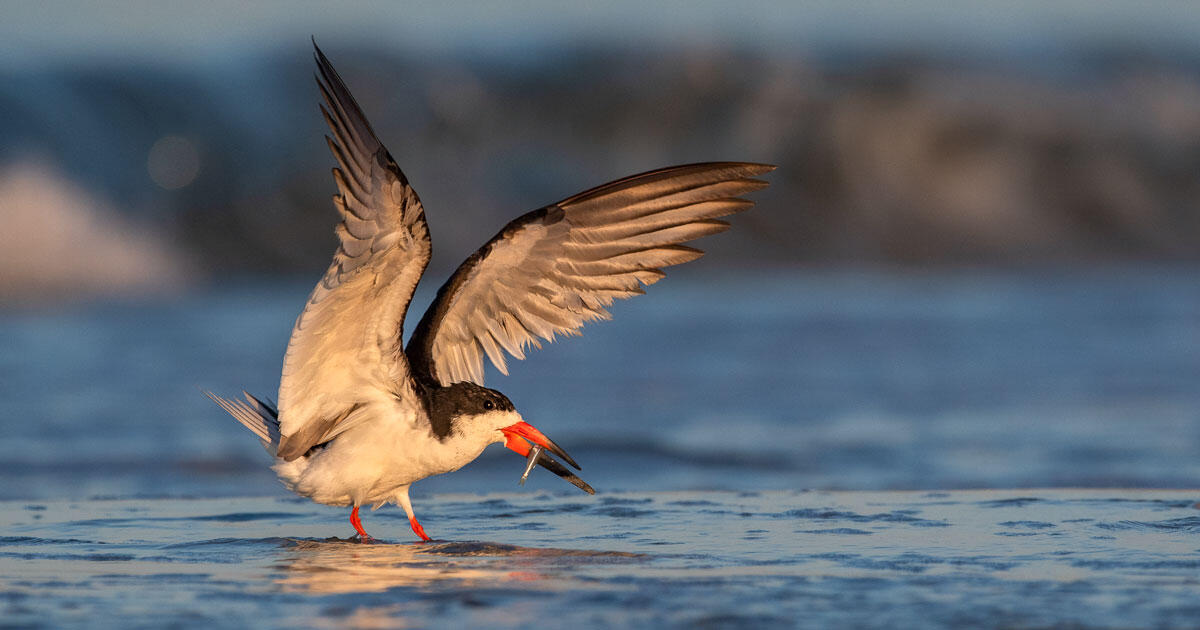 Birds like Black Skimmers don’t obey state lines. Tagging programs have shown that they bounce around from beach to beach, or cruise across the Gulf of Mexico in record time on their way from their wintering grounds to their nesting sites, and back.

That’s why it’s so exciting that the Deepwater Horizon Trustees, who are charged with restoring the Gulf after the BP oil disaster across all five Gulf states, announced nearly $100 million in new projects to ensure birds and other migratory wildlife are healthy and protected across the entire Gulf Coast. That includes almost $35 million specifically to support bird populations that are still recovering from the oil spill that began 11 years ago this month.

On top of that wonderful news, Louisiana is also moving forward with a $2 billion project to restore the Mississippi River with its wetlands in Barataria Basin.

These are huge investments in the Gulf’s ecosystems and wildlife, made possible through the $20 billion settlement BP paid to federal and state governments for its role in the Deepwater Horizon oil spill, which killed 11 people and an estimated 1 million birds, and released 210 million gallons of oil into the Gulf over 87 days. Several of the projects selected for funding are included in Audubon’s vision for restoring the Gulf of Mexico.

Let’s dive into each set of projects to understand how they’ll help birds and people on the Gulf Coast.

Among the projects proposed is the Bird Nesting and Foraging Area Stewardship project, which will support coastal bird stewardship across four Gulf states. A recent study led by Audubon’s Science team found that stewardship is an essential component of any restoration or recovery program.  The authors found that the populations of four species of vulnerable coastal birds grew 2 to 34 times faster at stewardship sites, compared to birds in protected areas without known stewardship Seabirds and shorebirds are vulnerable to predators, boaters, and beachgoers, and Coastal Bird Stewardship Programs are essential to helping many coastal birds thrive.

Other projects to support birds include restoring, protecting, and managing critical nesting islands like Chester Island in Texas, the Chandeleur Islands in Louisiana, Round Island in Mississippi, and Little Dauphin Island in Alabama.

Chester Island, named after longtime coastal warden Chester Smith, is a critically important island for birds like Brown Pelicans. It is one of only three islands supporting over 10,000 breeding pairs of colonial waterbirds in Texas, and the largest, most productive colonial waterbird nesting island in Matagorda and San Antonio Bays.

The Chandeleur Islands are renowned for their pristine nesting habitat for a rich diversity and abundance of conservation priority seabirds and waterbirds and as important wintering and foraging habitat for endangered species including Piping Plover and Red Knot.

Round Island has seen birds flock to the replenished island in great numbers since restoration began in 2016. But as vegetation begins to take root the areas available for beach nesting birds has diminished. Continued restoration of the island includes de-vegetation to allow for more open space for birds to nest.

Little Dauphin Island is a known foraging and loafing site for colonial waterbirds and the entire island has been designated as critical habitat for the federally threatened piping plover. This project would acquire an additional 15 acres of protected area to be encompassed into the Bon Secour National Wildlife system.

Lastly, another new project will identify and remove marine debris at key “hotspots” on the Gulf Coast, where birds and sea turtles are at risk of ingesting or getting entangled in marine debris such as discarded fishing line, nets, or traps.

Louisiana is facing a dire land-loss crisis. Since the 1930s, Barataria Basin has lost nearly 295,000 acres of land, displacing communities, threatening critical infrastructure and jobs, and devastating habitat for birds and other wildlife. Barataria Basin was also ground zero for the oil spill, causing wetlands to disappear 3 times faster than the rest of the state.

Louisiana’s bounty—its wildlife, fisheries, and beautiful natural places—are at risk of complete collapse without large-scale restoration projects like the Mid-Barataria Sediment Diversion. This project will build more wetlands than any other individual restoration project in the world. By reconnecting the Mississippi River with its marshes, the sediment diversion will mimic the natural spring floods that once replenished the marshes, benefiting birds, wildlife, and fisheries.

This project will also restore critical nesting habitat for Bald Eagles, and create wetland habitat that will support a huge variety of waterbirds and marshbirds. Audubon engages in this work through our Mississippi River Delta Coalition, together with Environmental Defense Fund, National Wildlife Federation, and several local partners.

This innovative project is a crucial step in turning the tide on the state’s land loss crisis and protecting vulnerable communities from hurricanes and sea-level rise, while also ensuring the long-term health of the ecosystem in the face of a changing climate and coast. You can help by submitting a comment to show your support for restoring Louisiana’s Barataria Basin. The deadline is May 4, 2021.